A flood of memories: looking back at Iowa’s epic flooding of 2008 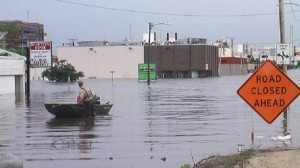 Maybe people are tired of looking back and even I have been cringing whenever I hear the words “flood anniversary.”

Still, it’s remarkable to think five years have passed since my hometown of Cedar Rapids,  and much of Eastern Iowa, were inundated with unprecedented flooding. I keep a gardening journal that often includes daily weather reports, along with other activities, and looked back to see what was happening five years ago.

In late May 2008, we went to the A&W Restaurant on Ellis Boulevard NW after a soccer game, for the last time, it turned out. On June 2 that year, I accompanied a class on a field trip to the downtown Science Station; the topic was “The Year of the River.” Also, the last time I would visit that venue.

Days later, I bought a plant from Ray’s Market, near Czech Village in southwest Cedar Rapids. It’s nowhere near where I live, and I don’t know why I stopped in that day, but am glad I did. Even the building is no longer there now. I also vividly recall going to Polehna’s Meat Market in Czech Village that week, but the business had already closed for the night. We’ll come back another time, I thought, but never got the chance. Polehna’s was another of the casualties of flooding from the Cedar River that began June 11, 2008, and finally crested June 13, at 31.12 feet, its highest level in recorded history. 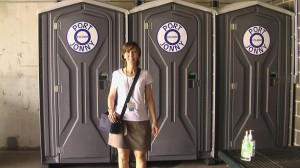 The author is shown at the back loading dock of The Gazette, where portable toilets were brought in because of water restrictions during the 2008 floods in Cedar Rapids, Iowa.

Nearly every one of the journal entries during that time includes rain: “another thunderstorm overnight,” “more downpours,” “flood warnings throughout Iowa.” The night of June 10, we helped a co-worker evacuate from her home in the Time Check neighborhood and brought sandbags to Czech School teacher Bessie Dugena’s shop in Czech Village.

By June 12, power was out to my house and elsewhere in the core of Cedar Rapids. Water restrictions were implemented – one of the ironies of the flood. My mom’s home where I grew up on Hamilton Street SW – seemingly so far from the river – was among the buildings inundated by floodwaters. “More storms at night, again, hail threats and tornado warnings. Very, very sad,” I wrote. Images of the now-gone Dairy Queen on First Avenue NW and the red roof of the National Czech & Slovak Museum & Library, both nearly submerged by floodwaters, stand out in my memory. 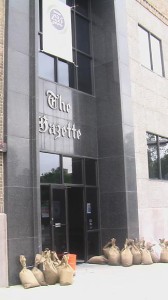 Sandbags dot the front of the Gazette building in downtown Cedar Rapids on June 12, 2008. (photo/Cindy Hadish)

Flood stories and flood recovery became part of my work and my life for the next few months and even years.  So many people lost so much in this city and elsewhere, but it has been inspiring to be able to report on recovery efforts, including that of the museum, Czech Village and New Bohemia.

I’m grateful that I’ve been able to continue that reporting in different outlets, as well. The writing is a form of catharsis, I think, that has helped make sense of the loss.

If you’re interested in this Homegrown Iowan’s flood perspective, here are links to a few of my flood anniversary stories in other publications, plus two recent flood stories from this website: