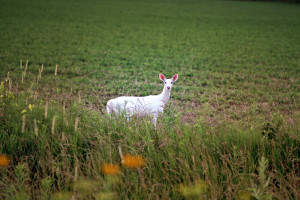 This albino deer has been spotted in recent weeks, west of Solon, Iowa. (photo/Iowa DNR)

Wildlife biologists stake the odds of an albino deer at 1 in 100,000 or more, with sightings reported only every few years in Iowa; the latest being a doe near Solon. Fortunately, these rare animals are protected in the state.

I’m hearing there is some dispute over whether or not this is actually an albino, due to its eye color, but here is what the Iowa Department of Natural Resources released today about this natural attraction:

A family with a couple small children. A woman walking her dog. Not a big crowd, but they pause for a few minutes along a farm field drive, west of Solon, waiting to see if the feature attraction will show. A snow white deer has appeared most evenings for the last two weeks. At times, a dozen people stand at the top of the hill, 200 yards away.

The mature deer–without antlers, so presumed to be a doe–sometimes stays a couple minutes. Other evenings, she grazes in the hayfield for an hour. As an added feature over the weekend; a fawn—regular colored—trotted a few steps ahead of the pink-eared, pink-nosed adult, before ducking into the overhead grass. Her fawn? Nothing confirmed, though the older deer made the same sharp turn when she came to the spot.

Traffic slows on the highway. Occasionally, a vehicle pulls over if the deer is visible through the roadside brush. A couple daybreak walkers and bicyclists along County F-16, east of Lake Macbride State Park, have noticed her, too.

Wildlife biologists stake the odds of an albino deer at 1 in 100,000 or more. Every few years, sightings of one are reported in Iowa. Each parent must carry the recessive gene and pass it along to the fawn. There is evidence that albinism in an animal carries with it a higher prospect of developing skin or eye ailments; which could shorten its life span.

Though prospects in the wild are diminished by that biological background, such deer warrant a ‘pass,’ come hunting season. The Iowa Legislature in the 1980s ruled it illegal to hunt ‘a predominantly white, white-tailed deer.’

For now, though, the small crowd is curious but quiet, holding back a couple hundred yards, settling for photos with telephoto lenses or smart phones. Occasionally, an observer from the highway catches a closer shot, across the fence.

As the adjacent Coralville Reservoir recedes to normal summer pool levels, more dry ground returns. That could well reduce the near-nightly appearances. Early this week, the doe was a ‘no show’ for couple evenings in a row.