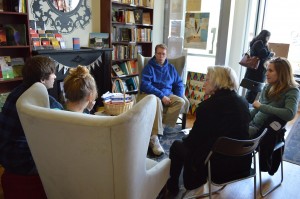 State Sen. Rob Hogg, center, listens to constituents during a discussion of his book during Eco-Fest 2013 at New Bo Books in Cedar Rapids. Hogg will sign copies during a book reading Saturday, May 4, at the same location. (photo/Cindy Hadish)

I’ve heard our own state Senator, Rob Hogg, describe the challenge of climate change as he speaks to groups about his new book.

Hogg, a Democrat from Cedar Rapids, compares it to the challenges his parents’ generation faced in winning World War II and fighting the Cold War. “In the climate century, we will not ask our young people to lay down their lives by the thousands in foreign countries,” Hogg writes in “America’s Climate Century.”

Those suggestions, and many more sprinkled throughout the book, make “America’s Climate Century” a viable call to action. Yes, the threats wrought by climate change are noted in the book along with past disasters: hurricanes Katrina, Isaac and Sandy and one that hits closest to Hogg’s home: the Floods of 2008. But those consequences, with their billions of dollars in economic tolls and human suffering, are tempered with actions individuals can take to make the overwhelming forces of climate change more within our control.

Topping Hogg’s list is our role of citizenship. “We must demand comprehensive climate action from Congress and the President, now, and sustain that action for decades to come,” he writes. Hogg encourages Americans to write and call their U.S. Congressional representatives and U.S. Senators regularly and to even run for public office (though I’ve heard him joke that the latter is advocated, as long as it’s not against him.)

The book’s title refers to “every aspect of our lives (being) affected by human-caused global warming and its resulting climate changes” in this century.

“America’s Climate Century” is Hogg’s wake-up call to America, backed by scientific data and the most up-to-date statistics stated in easily comprehensible terms. If you’re already on board, he offers responses to the “Doubting Thomas” in the book’s appendix; for example, why global warming isn’t “just natural.” If you happen to be one of those Doubting Thomases, reading this just might shed new light on these critical issues.

Rob Hogg will read and sign copies of his book, “America’s Climate Century,” at 7 p.m. Saturday, May 4, 2013, at New Bo Books, 1105 Third St. SE, Cedar Rapids. The book,  just published this spring, can also be ordered at Amazon.com or Createspace.com.