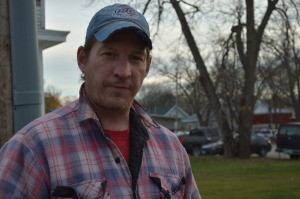 Ed Thornton pauses as he clears out the last of his garden in November, to comply with an order by the city of Cedar Rapids. (photo/Cindy Hadish)

CEDAR RAPIDS —Even when Iowa’s harsh wintry weather ended the growing season for most gardens, the plot tended by Ed Thornton in southwest Cedar Rapids was thriving.

Tender green lettuce, stocky carrots and deep magenta beets were among the vegetables Thornton was able to grow, even into November, giving away much of the produce to neighbors and anyone who happened by the site. But no longer.

Cedar Rapids officials ordered Thornton to remove the garden, which he had planted on a city-owned vacant lot the past four years, and won’t allow him to return.

“I think this is going to sit here and grow weeds,” Thornton said, after removing the last of the vegetables earlier this month. 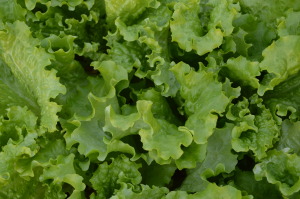 Even after a hard freeze in November 2014, lettuce was thriving in the garden tended by Ed Thornton in Cedar Rapids, Iowa. (photo/Cindy Hadish)

Thornton, who lives next to the site at Sixth Street and First Avenue SW, drew national attention this summer when the city threatened him with legal action for gardening on the vacant lot.

He was able to work out an agreement that allowed him to finish the gardening season, but city staff members have since determined that Thornton will not be able to return.

“It’s our land,” said ​Kevin Ciabatti, Building Services Director, who ensured that Thornton removed fencing and other items used to support the garden. “It’s been decided it’s an eligible lot for construction.”

The city purchased the property and removed two duplexes at the site after the 2008 flood, leaving a lot that became overgrown with weeds until Thornton decided the land could be put to better use to grow vegetables.

“The City Council’s first priority after the flood is to repopulate our neighborhoods to keep our neighborhoods vibrant,” said Jennifer Pratt, the city’s Community Development director. The council approved the demolition of more than 1,200 homes and other buildings after the flood and had shown no interest in the vacant lot until one person complained about Thornton’s garden. He still doesn’t know who made the complaint. 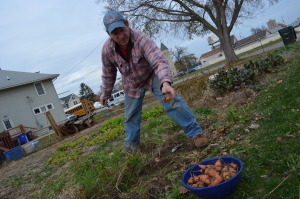 Thornton has asked to use the land under an agreement similar to Matthew 25, a non-profit that gained permission to use large swaths of land in northwest Cedar Rapids for its urban farm.

The organization sells the produce grown there. Thornton used the vegetables he grew and gave much of it away for free, even offering advice on how to use okra, rosemary and more. He wondered if the reason the city took action was because he was in a sense “competing” with people who sell produce.

Pratt said the land Thornton was using has been identified for housing and that it will go to a developer in the near future.

She said the city offers 300 plots that residents can lease to use for gardens. Those plots are far removed from where most people live, including Thornton.

In light of the Blue Zones Project in Cedar Rapids, which promotes healthy living, Cedar Rapids recently updated its Urban Agriculture ordinance to allow for community gardens on private property with the property owner’s permission.

Still, the city doesn’t appear to practice what it preaches. Pratt said the odds that Thornton would be allowed to garden again on the lot are slim.

“At this point, the preferred use (of the lot) is a new home,” she said.

Thornton hasn’t abandoned his cause. A petition he started Sunday, Nov. 16, at Change.org, called “Let Ed garden in 2015,” has already drawn a number of supporters.

“This is something that isn’t costing the city anything,” commented one person on the petition. “It’s helping the people in need as well.”

“If a religious organization can grow food to sell, Ed should be able to garden as well,” another person wrote. “Selling lots only to developers of a certain size is unfair and unlikely at this location.”

“I understand how the city works, our leaders think THEY are the city, and will do as they please,” another comment said.

“He is growing fresh produce that he shares,” wrote another supporter. “This is how neighborhoods should be.”

Gardening could lead to trespassing charge

Paula Mitchell, Housing and Redevelopment Manager for the city of Cedar Rapids, explained the process through which Matthew 25 obtained land for its urban farm, and more about the developer interested in the land on which Ed Thornton gardens.

The letter of interest was received from Robinson Construction, but Mitchell noted, that does not mean the company will be the builder ultimately allocated the lots. The city will be undertaking additional allocations/reallocations in the spring, ahead of the 2015 construction season, as the city’s funding source for this program is currently available only through 2015. Builders receive the lot in exchange for their minimum investment and covenant to sell the home to an eligible buyer through the program.

“The Matthew 25 project is somewhat different in that it came to the City as a master-planned development concept that included both housing and urban agriculture,” Mitchell wrote in an email. “The City Council was open to the concept because of the housing component as well as the desire to promote master development concepts that address the needs of an entire block or multi-block area.

“Urban agriculture was proposed on lots that were unable to be redeveloped for housing, either because they are encroached upon by the 100-year flood plain, or because the lot size or adjacent uses – railroad, industrial, etc. – make them unsuitable for single family housing redevelopment. From a land use perspective, the urban farm area helps to buffer the residential areas from those less than compatible adjacent uses. In addition, the Matthew 25 proposal went through a public vetting process and City Council approval.”

Mitchell wrote that the housing component of Matthew 25’s master plan utilized city housing programs, such as ROOTs, so the City also executed agreements that are specific to those programs.

“Again, it was the master plan concept with housing that allowed this proposal to advance,” she wrote. “I’m not aware of any instances in which the City has undertaken property disposition for urban ag as a standalone activity.”

The original development agreement with Matthew 25 called for a $1 per month lease for 13 lots in northwest Cedar Rapids. Since then, seven more lots have been added with the same lease terms. As the end of a 36-month term ends this December, Matthew 25 has the option to buy the property for $1.

In return, Matthew 25 needed to invest $80,000, which includes items such as site preparation, construction of playground and hardscape features, installation of water lines, and landscaping and plantings. The rental rate is $1 per month for the entire development property, plus the developer’s minimum investment. In addition, Matthew 25 is required to meet a Community Development Block Grant (CDBG) National Objective with the operation of the Urban Farm and maintain records that demonstrate compliance.

“We’ve built one new home and other developers have built two new homes,” he said in an email. “Additionally, our plan called for the rehabilitation of an adjacent, historic warehouse into apartments. Neighborhood Development Corporation, a non-profit under the direction of Marty (Hoeger)  is carrying out this work and will have completed it in early 2015.”

Twedt-Ball added that the group does sell produce, but more than half of it is sold at 1/2 price to income-qualified families and more than 25 percent of their produce this year was given away to Green Square Meals.

“So, the idea that Matthew 25 is out selling produce to make money and doesn’t want competitors is a little off,” he wrote. “Our top two priorities for the city-leased land are food education and food access for people facing economic and food insecurity challenges.”

He noted that Matthew 25 did not make the complaint against Thornton.

“Matthew 25 is really excited to see all the current interest in urban agriculture. We love seeing folks trying to take vacant or underused properties and turning them into something positive for the community,” he wrote. “As with anything, we understand the need for the city to have guidelines and processes for people to follow. At Matthew 25, we’ve always found the city to be very easy to work with on urban agriculture and the guidelines to be reasonable. We can also understand the need to prioritize bringing the population and tax base back in flood-impacted neighborhoods.”