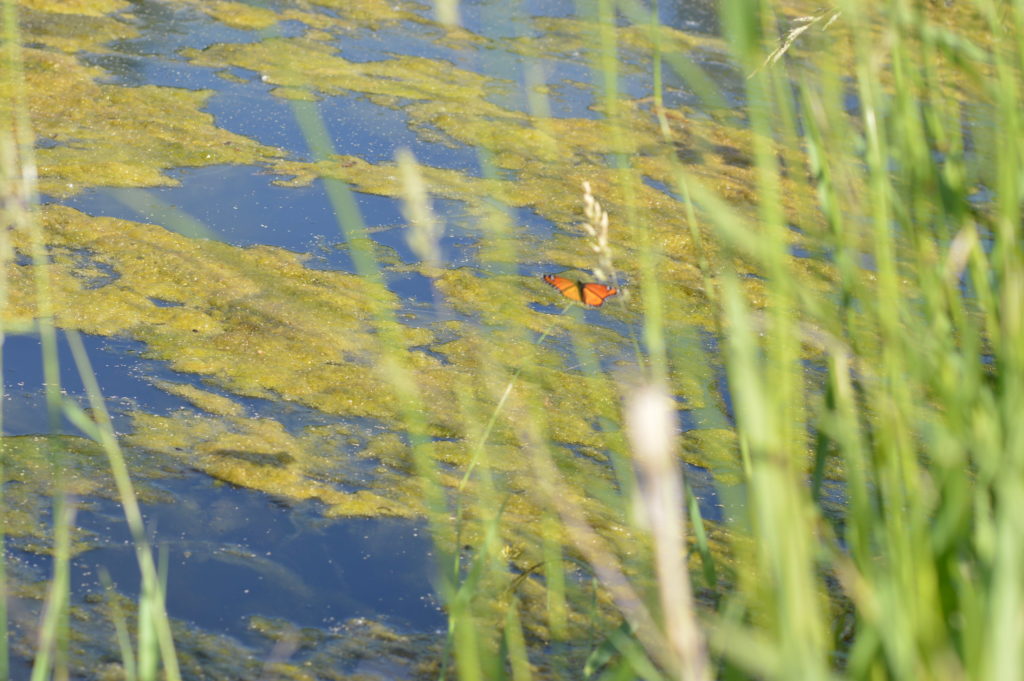 Butterflies were among the wildlife that thrived at this urban wetland in southwest Cedar Rapids. The city is draining the pond and removing numerous trees to create a detention basin. (photo/Cindy Hadish)

(UPDATE June 5, 2017) Crews this morning began draining the pond in southwest Cedar Rapids. The process could take a full day. 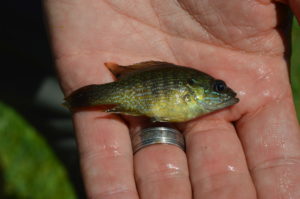 Fish like this one that swam in the pond will be buried once the water has drained. (photo/Cindy Hadish)

One person was hoping to catch some of the bluegills and other fish that would otherwise be buried to stock his pond in Amana.

City officials directed questions about the detention basin – with a price tag of  $287,775 – to Project Administrator Patrick Wieneke, who is out of the office for the week.

Neighbor Frank Kubovec said he was surprised that the Iowa Department of Natural Resources or other agencies did not appear to have more oversight of the project, given the bats, eagles and other wildlife in the area.

“They could have done a lot of different things,” he said of the city’s plans for the nearly 1-acre pond and surrounding land that was previously forested. “It’s a shame to see this.”

“We’ve received citizen concerns regarding a regional detention basin project located west of 18th Street SW, directly east of Hughes Drive SW. This property was acquired by the City in 1999 for stormwater management and is needed to collect stormwater runoff from 94 acres upstream.  The project will reduce stormwater runoff impacts to downstream properties along Rockford Road SW and 3rd Avenue SW.

Throughout the planning and design process, City staff worked with neighbors and met with residents several times; the most recent public meeting was held in March of 2016 to share design plans with residents closest to the project area. An invitation was sent to 21 addresses and 9 individuals attended that  meeting. These design plans were developed with strict oversight from the Army Corps of Engineers and Iowa Department of Natural Resources (IDNR). Because wetland north of the pond will be disrupted by this project, an area in Seminole Valley Park will be used as a wetland to minimize the environmental impact. In regards to the fish in the pond, the IDNR will not allow the fish to be moved due to disease risk and required on-site burial. Native grasses and wildflowers will be planted within the basin and 30 trees will be planted around the basin.

The public hearing for the project was held on January 24, 2017 and bids were received on February 1, 2017. No public objections were filed.”

CEDAR RAPIDS – Fish, frogs and other aquatic life will be buried alive under plans to remove a tree-lined pond that residents have enjoyed for decades in southwest Cedar Rapids.

“We’ve already shed some tears over this,” said Nick Maybanks, who taught his daughters how to fish in the pond, between Balsam Drive and 18th Street SW.

The land is owned by the city, which is removing the pond and numerous trees to create a detention basin.

Neighbors who live near the area, which they describe as a nature “oasis,” said the pond has been there for more than two decades, with the surrounding land serving as a haven for monarch butterflies, turkeys, hawks, owls, deer and other wildlife. 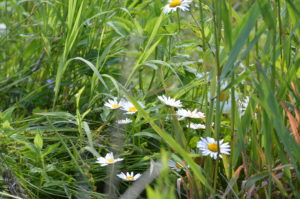 Daisies, milkweed and other plants grow near the pond that the city of Cedar Rapids is removing for a detention basin. (photo/Cindy Hadish)

Already, 100 or so trees have been removed in recent days alone, Maybanks estimated.

He pointed to an empty spot where a mature tree once stood, where he and his daughters used to swing from a vine. The tree is gone, as is an entire swath of trees that extended from near the pond to 18th Street.

Neighbors said teenage boys would spend afternoons fishing at the pond, away from their electronics, to simply enjoy the outdoors.

Laurie Church said she enjoyed bringing her two grandsons to the pond since moving to the neighborhood in 2015.

“I was hoping we could do that again this summer,” Church said. “It just makes me really sad.”

Maybanks said an excavating company representative told him the pond would be drained and fish buried there this Monday, June 5. 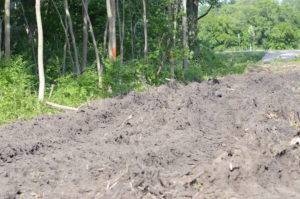 Heavy machinery created deep trenches in the land surrounding the pond, where numerous trees have been removed. (photo/Cindy Hadish)

He added that it appears the detention basin is needed because of development on Shady Grove Road SW, where homes are being constructed. Neighbors say natural springs abound in the area.

Maybanks and others in the neighborhood questioned why the pond and mature trees, which both retain water, would be removed to create a detention basin.

City officials could not be reached this weekend for comment.

Dragonflies hovered over the pond, birds swooped nearby and frogs could be heard calling this weekend as neighbors visited one last time.

“It just seems short-sighted,” Maybanks said, wondering where the nesting birds and other wildlife would go. “When you take away a place like this, it’s gone forever.”

A red-headed woodpecker, a species listed as near-threatened, alights in a tree next to the pond in southwest Cedar Rapids. (photo/Cindy Hadish) 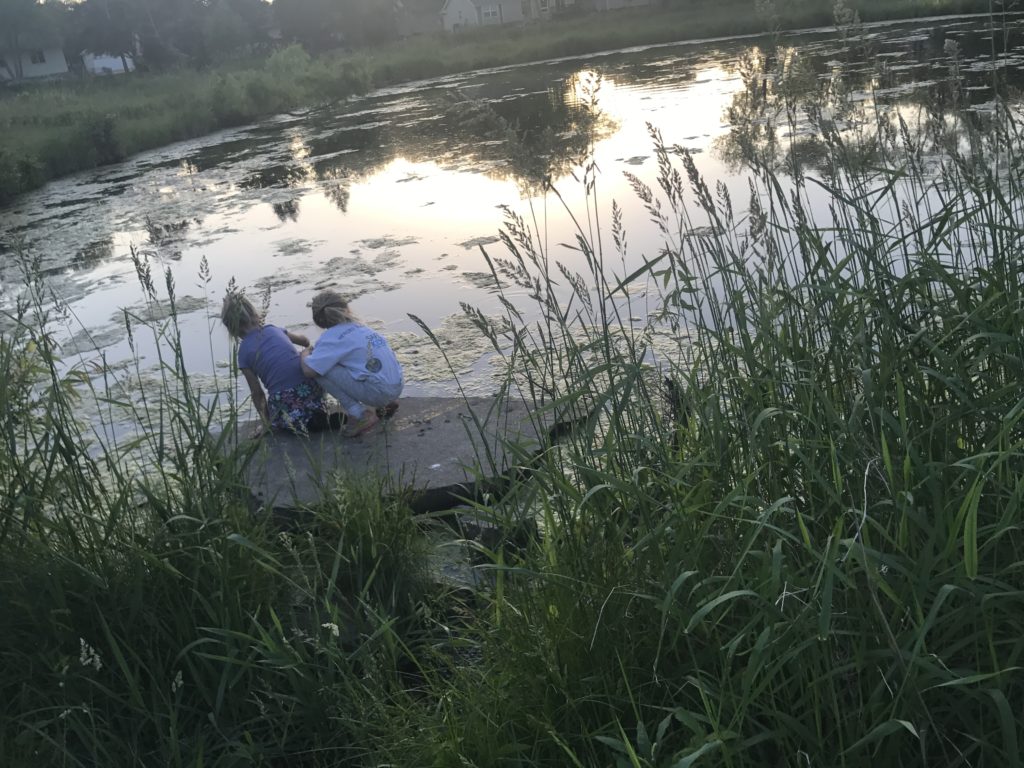 This pond in southwest Cedar Rapids is scheduled to be drained, and fish living there buried, on Monday, June 5, 2017. (photo/Nick Maybanks)