Cedar Rapids runner finds acceptance on and off the course 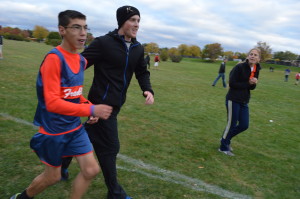 Sports events are not usually the subject matter I cover, but this homegrown young man offers an inspirational story through his efforts on the Franklin Middle School cross-country team. You can also read this article, along with many other inspiring stories, at: www.metrosportsreport.com

CEDAR RAPIDS – Adam Todd has made a name for himself in the world of running; no small feat given the obstacles he faces in everyday living.

The 14-year-old has Lennox-Gastaut Syndrome, a rare form of epilepsy that causes multiple types of seizures resulting in developmental delays and cognitive impairment.

Finding the right course of treatment has been a struggle for his parents, Dale and Sara Todd of Cedar Rapids, but one almost miraculous form of therapy has been found on the running trail.

“His epilepsy doctor in Chicago told us, ‘I can’t give you any medication that’s better than running,'” Sara Todd said. “He almost went a year without a seizure – April to April. It’s good for him physically, mentally and emotionally.”

An eighth-grader at Franklin Middle School in Cedar Rapids, Adam joined the running club in sixth grade and has participated in track and cross-country since then, competing Tuesday in his last cross-country meet of the season.

The crowd dwindled somewhat by the time Adam finished the two-mile course another 12 minutes later, but was no less enthusiastic.

Race volunteers, parents, and even coaches and runners from opposing teams, joined in to cheer for Adam, by name.

“He might not be the best runner, but he’s dedicated,” said Alex Johnson, 13, a Wilson Middle School seventh-grader, who stood alongside the course with a group of friends, encouraging Adam near the one-mile mark. “He’s got heart and real dedication.”

Adam’s first seizure came at age 3. He spent much of his young life wearing a helmet to protect his head from seizure-related falls, but has been able to forgo that protection in recent years. 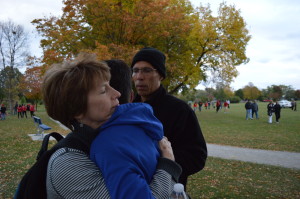 Adam Todd hugs his mother, Sara, as his father, Dale, looks on after the eighth-grader’s last cross-country meet of the season.  (photo/Cindy Hadish for Metro Sports Report)

His mother, who is a nurse, and father, a project manager at Hatch Development Group and former Cedar Rapids parks commissioner, have been active in raising awareness about epilepsy on Capitol Hill and elsewhere.

The two are marathon runners, which seems to have played a role in Adam’s love of the sport.

Franklin Principal Shannon Bucknell said he has seen Adam’s mobility increase, along with his academic progress and communication and social skills, since he started running.

Bucknell noted that having special education students participate in extra-curricular activities is not uncommon at Franklin, which strives to include all students in sports, music and other programs.

“Everyone is pretty much accepted and we’ve been fortunate that our district special education department has supported this for our after-school activities,” he said.

To that end, just as in class, Adam has a one-on-one assistant at practices and meets.

“He always has a good cheering squad. That’s what really keeps him going,” said Iosbaker, noting that Adam’s best meet this year was in Iowa City, where he ran the entire two miles without stopping.

Cross-country coach Jennifer Schnell said she didn’t hesitate to include Adam on the team.

In fact, Schnell, who also is a physical education teacher at Franklin, was the person who invited Adam to join the winter running club, after noticing how much he enjoyed running in PE class.

“He’s definitely a part of the team,” she said, adding that Adam is the first special education student who has run cross-country during her years as Franklin’s coach. “He’s treated as equally as anyone else.”

His teammates also have benefited from Adam’s participation, Schnell said.

Fellow eighth-grader Desmond Martin, 13, said he often trains with Adam and has run alongside him at meets.

Adam’s smile can put anyone in a good mood, he said.

“He gives the team its energy and spirit,” Desmond added. “I don’t know what this team would be like without him.”

That attitude led to a special honor for the Franklin track and cross-country teams.

The groups were presented with the 2013 Community Inclusion Award this fall at The Arc of East Central Iowa annual awards ceremony.

“Seeing the joy on Adam’s face when he is running with his Franklin team is truly uplifting and inspiring,” Sara Todd wrote, in nominating the teams for the award.

She went on to describe an incident at track practice last year, during which Adam had a seizure.

“When my husband got to the track and was helping Adam to his feet, his teammates rose and started clapping for Adam,” she wrote. “That type of support and understanding meant so much to us. Simply put, Adam loves being a part of this Franklin team.”