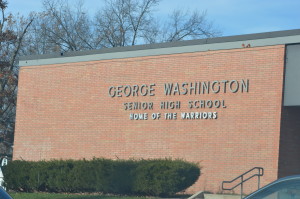 A state commission will decide whether or not to refer a case involving the Cedar Rapids Community School District to the Attorney General’s Office for further enforcement.

The Environmental Protection Commission will take up the question regarding asbestos removal at Cedar Rapids Washington High School at its meeting Feb. 16, 2016.

The meeting begins at 10 a.m. at the Iowa Department of Natural Resources Air Quality Bureau, 7900 Hickman Road, in Windsor Heights.

Kelli Book, attorney for the DNR, said the DNR will request that the commission refer the school district, along with Abatement Specialties – the company the district hired to conduct asbestos removal at Washington – to the Attorney General’s Office.

Book said the Attorney General’s Office first would likely work towards a settlement in the case, but if further action is warranted, could file a civil lawsuit in Linn County. The maximum penalty for each violation is $10,000 per violation per day.

When the district was made aware that uncontained asbestos was found in the school, appropriate measures were immediately taken to address the situation consistent with commonly accepted asbestos abatement procedures, school district officials have said.

Learn more about the report: Asbestos removal “looked like a powder bomb”

Official cited teachers and students in school when asbestos in air

Members of the public can make comments before the presentations beginning at 12:30 p.m. The DNR presentation begins at 1 p.m.

Anyone wishing to speak at the meeting should make the request to Jerah
Sheets at Jerah.Sheets@dnr.iowa.gov,  or by mail at: 502 East 9th, Des Moines, IA 50319, or by calling: 515-313-8909, or in-person by the start of the meeting at 10 a.m. Indicate who you will be representing (yourself, an association, etc.,) the agenda item of interest and your stance: For, Opposed, or Neutral.

Anyone unable to attend the meeting can submit comments by mail and email for the public record. The commission encourages data, reports, photos and additional information be provided by noon the day before the meeting to allow ample time for review and consideration. Written comments can be submitted to Angie Clark at Angie.Clark@dnr.iowa.gov.