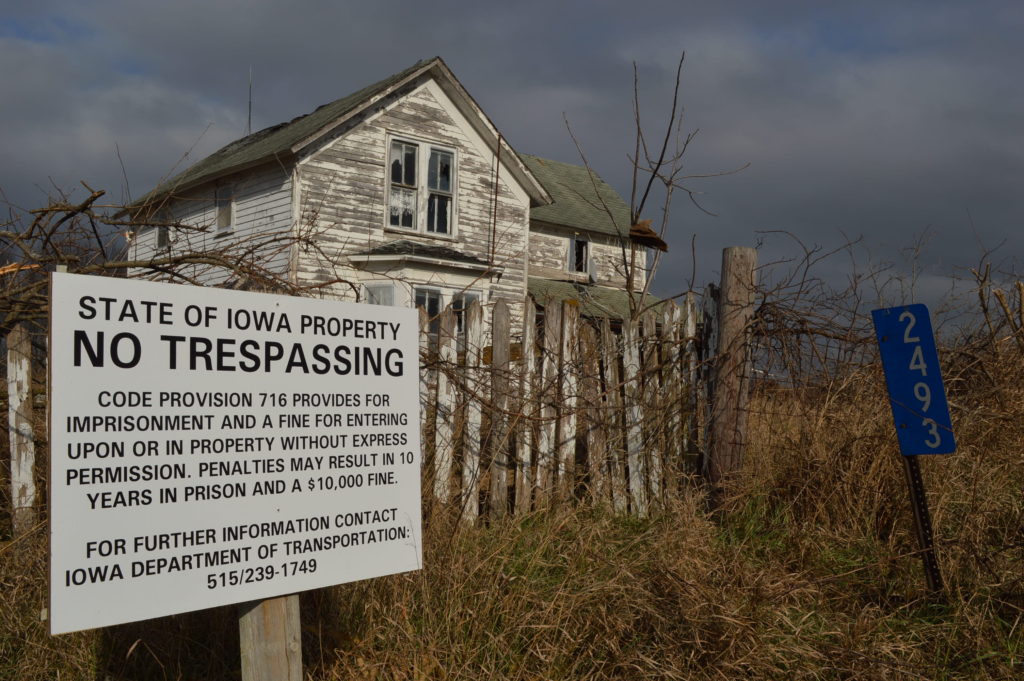 Three homes and several outbuildings have been acquired for construction of the four-lane U.S. Highway 30 in east-central Iowa. (photo/Cindy Hadish)

History abounds in the Tama area of east-central Iowa, situated along the original Lincoln Highway.

U.S. Highway 30, part of which follows that historic route, is being widened to four lanes for about 12 miles from Tama through Benton County. 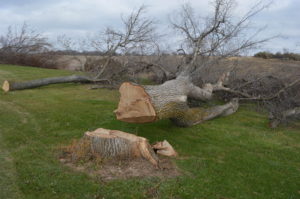 Trees are being removed to make way for widening of U.S. 30 along a 12-mile stretch of the highway in Iowa. (photo/Cindy Hadish)

Trees have been cut on the north side of the highway since October, said Tony Gustafson, assistant District 1 engineer for the Iowa Department of Transportation, with tree removals timed to minimize impact on two protected bat species: the Indiana bat and Northern long-eared bat.

Gustafson said grading, bridge and culvert projects will be let in December and will take two years (2018 and 2019) to complete, with paving of the new four-lane highway in 2020.

The scenic portion of the route, coined “Bohemian Alps” by locals with a nod to the multitude of Czech immigrants who settled the area, will be graded to improve safety along the highway.

Gustafson noted that all of the new four-lane U.S. 30 will be constructed on the north side of old U.S. 30, but side road construction will also take place on the south side of U.S. 30.

Mark Holm, an acquisition supervisor for the Iowa DOT, said three houses and several outbuildings were acquired for the project. Any historical or cultural sensitivities were evaluated by the DOT’s Office of Location and Environment, assisted by the State Historic Preservation Office, he said.

In addition to being home to the last remaining original Lincoln Highway bridge, built in 1915 and added to the National Register of Historic Places in 1978, Tama includes the historic Cherry Mansion, built in 1903, among its landmarks.

See more photos of the changes along Highway 30, with bonus shots from Tama: 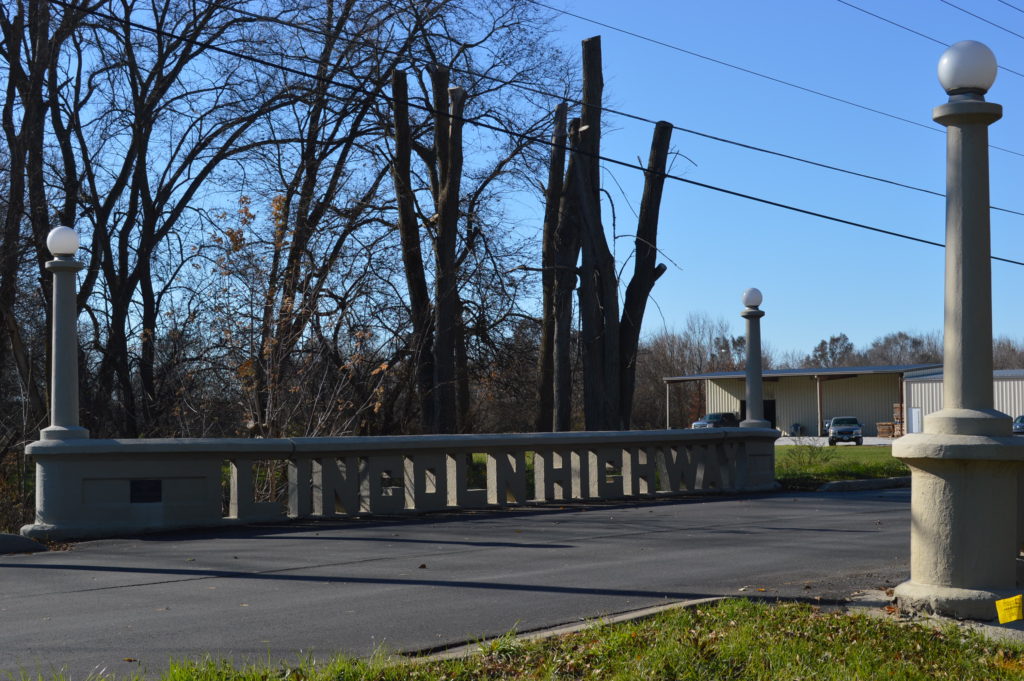 Built in 1915 in Tama, Iowa, the Lincoln Highway bridge is the last original bridge remaining along the historic transcontinental highway. (photo/Cindy Hadish) 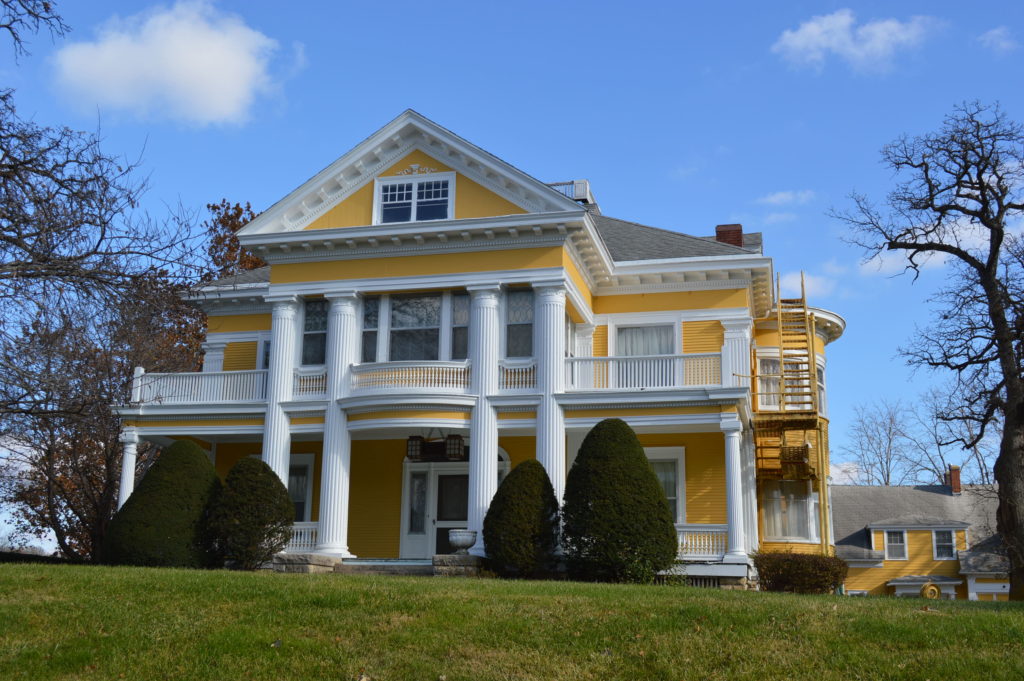 The Cherry Mansion was built in 1903 in Tama, Iowa. (photo/Cindy Hadish) 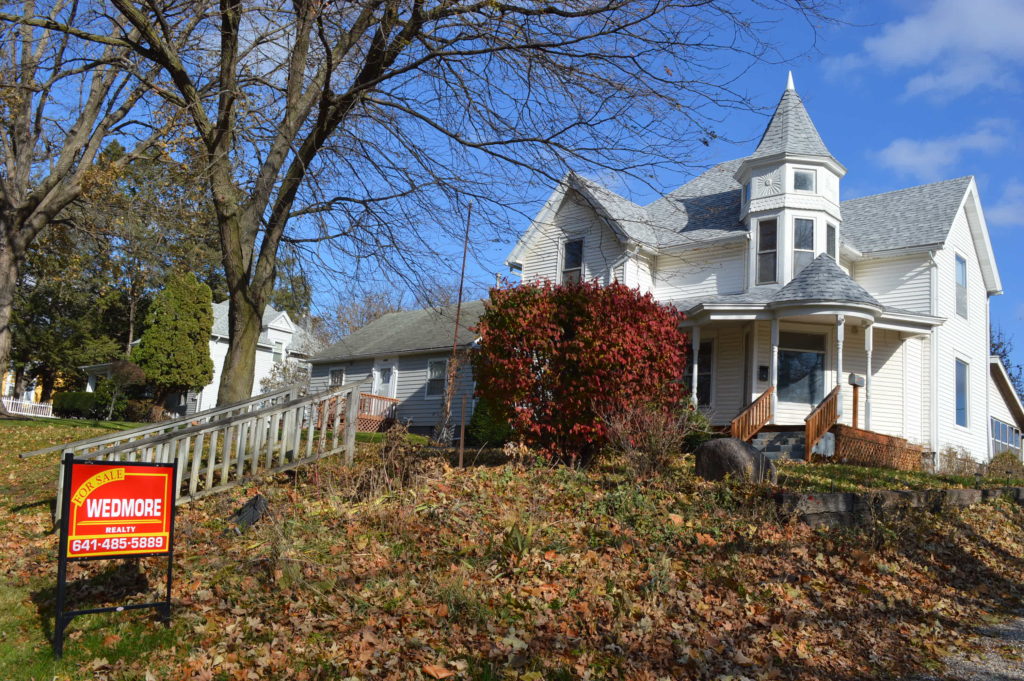 Other grand homes remain standing in Tama, Iowa, including this one shown for sale on Nov. 15, 2017, just a few doors down from the Cherry Mansion on State Street. (photo/Cindy Hadish) 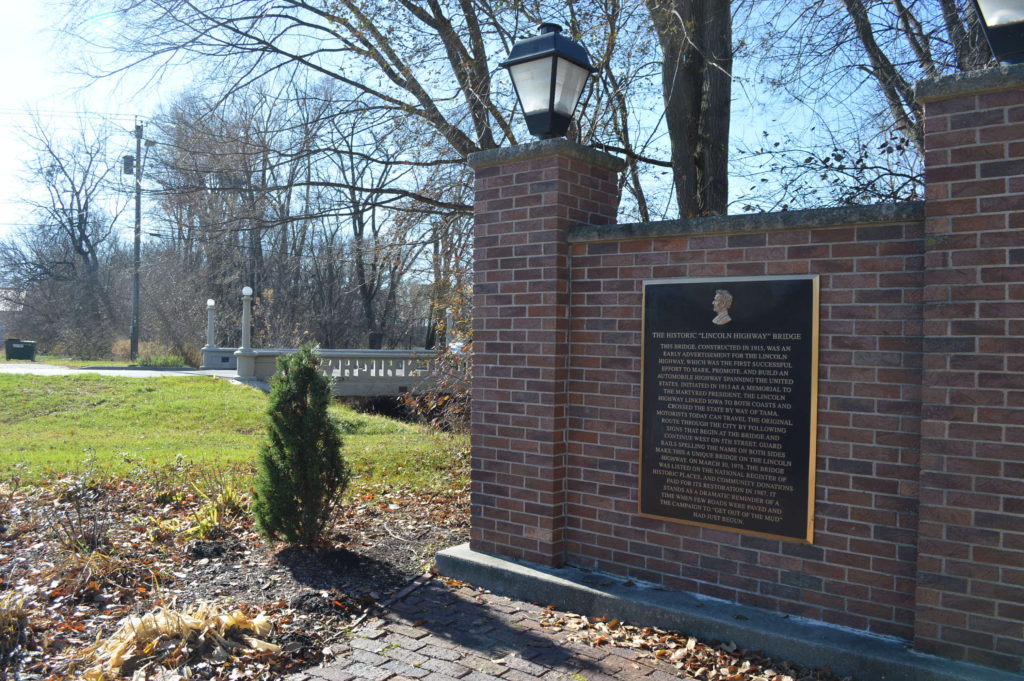 A marker notes the history of the Lincoln Highway bridge in Tama, Iowa. (photo/Cindy Hadish) 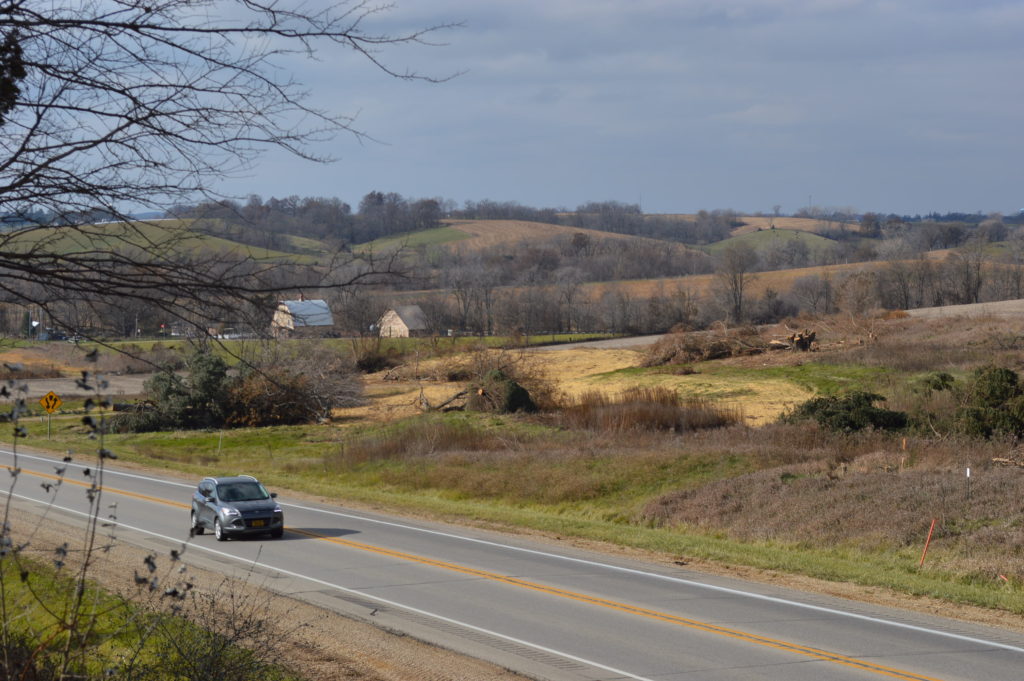 Trees are being cleared along the north side of U.S. 30 in Tama County. (photo/Cindy Hadish) 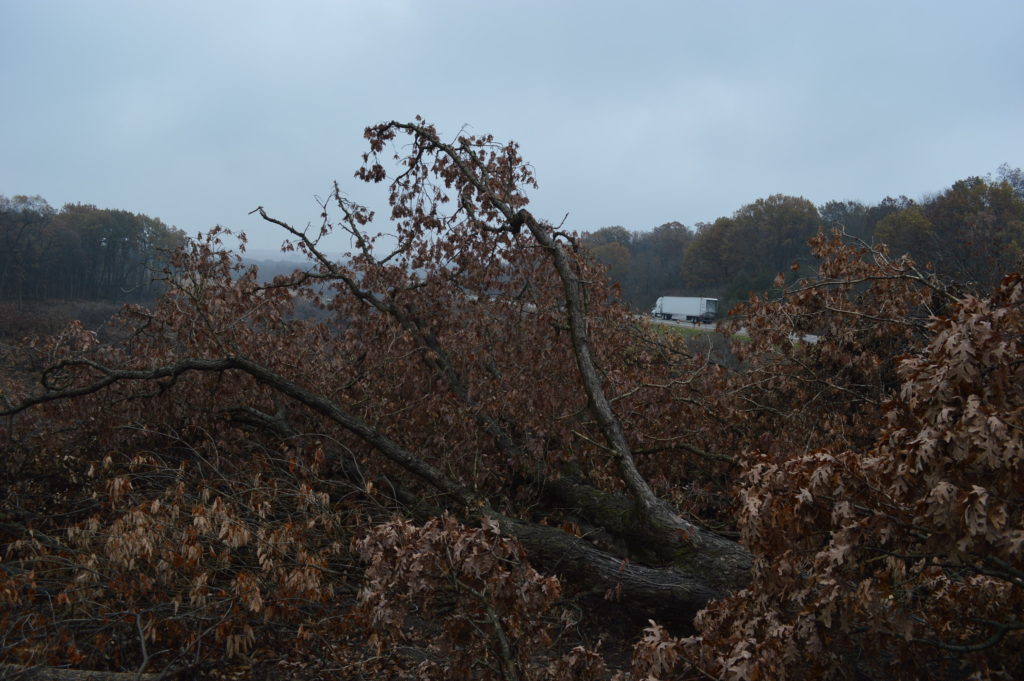 Oaks are among the trees being removed for the widening of U.S. 30 in east-central Iowa. (photo/Cindy Hadish) 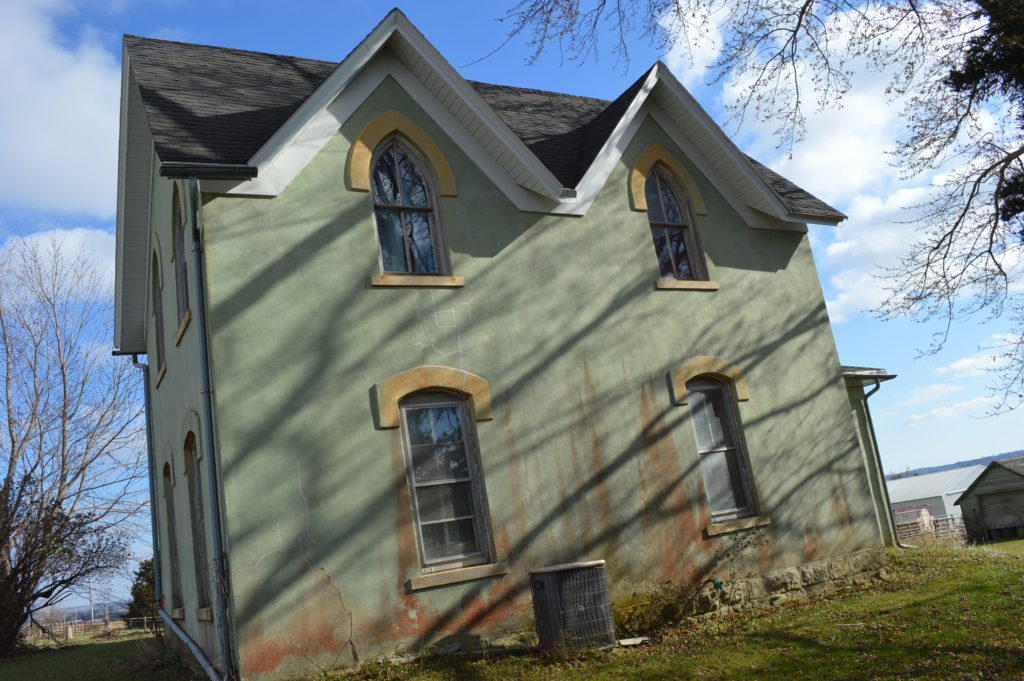 Homes on the south side of U.S. Highway 30, such as this farmhouse with Gothic windows near Tama, have not been acquired for the highway widening project. (photo/Cindy Hadish)