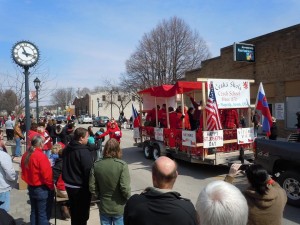 The Czech School float makes its way down 16th Avenue in Czech Village during the St. Joseph’s Day parade in March. Czech Village will host Houby Days from Friday, May 17, through Sunday, May 19, 2013. (photo/Cindy Hadish)

Sometimes, the season has long passed before the annual mid-May celebration takes place, or few of the mushrooms are found before the festival has ended.

That timing is significant, as Houby Days celebrates morels. “Houby” is the Czech word for mushrooms and anyone who lives in this part of Iowa knows how much people here love their morels.

This year’s event runs Friday, May 17, through Sunday, May 19, in Czech Village, next to the Cedar River on 16th Avenue SW. A parade that was a longstanding Houby Days tradition will not take place, but other events are planned, including Bob Dorr and the Blue Band on Friday night; a carnival; performances by the Czech Plus Band and of course, the egg and houby breakfast, set this year at Smuggler’s Wharf, 87 16th Ave. SW.

Al Zindrick, co-owner of Smuggler’s Wharf, said real morel mushrooms are scrambled with eggs for the breakfast. The mushrooms are shipped in from a Minnesota company and are certified, he said.

If breakfast doesn’t fit your schedule, a tasty pork and dumpling dinner is scheduled for 5 p.m. Saturday at St. Wenceslaus Church, just across the river at 1224 5th St. SE. The 16th Avenue Bridge has been closed due to construction, so the 12th Avenue Bridge would be the better choice for vehicles.

A Houby Contest that takes place on Saturday provides awards for the biggest, smallest, best display and most unusual morel mushrooms. Mine has already been eaten, but anyone who wants to enter can find the contest registration, along with the full Houby Days schedule, at: www.czechvillagecedarrapids.com.