Diatomaceous earth vs. the ants 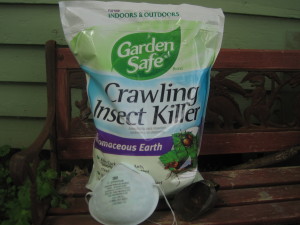 Although it’s a natural product, don’t mess around with diatomaceous earth. Instructions call for use of a mask and rubber gloves when applying it, and avoiding contact with skin or clothes. (photo/Dave DeWitte)

A long time ago when I bought my first house, I was in for a surprise.

The place was already occupied by a young couple, who planned to stay on as renters for two months after I took ownership. When I stopped by to have them sign a lease, a big cockroach scurried under a rug and I pointed it out.

They shrugged, “yes, the place has cockroaches,” and offered me a glass of wine. They were both former Peace Corps volunteers and they had worked in third world countries. They argued that it was preferable to have cockroaches than to spray toxic chemicals all over the house – at least while they were living in it – so the cockroaches would be safe until they moved out.

I might be less understanding today, but at the time I just didn’t know what to say, and so I let it slide. When I moved into the house, I called an exterminator and happily paid over $100  to be roach-free without giving the toxic chemicals a second thought.

I thought about that couple this spring  when tiny ants began to overrun my living room, bathroom and even my mailbox. I’d seen a few ants in my kitchen before, although never in such numbers. They were harmless black ants, but they were getting on my food and the food in the cat food bowl I kept in the bathroom.

My previous efforts at controlling ants had been decidedly mixed. They had consisted of setting out little squares of cardboard and applying a small drop of Terramax ant poison. The poison apparently had a sweetness that drew the ants, but it didn’t draw them all because they never completely went away.

Determined to rid my house of ants  I went to the pest products aisle of the home improvement store where I was working. There were sprays, powders, granules – you name it. They all sounded scary and I certainly didn’t want to spray or spread any of them in my kitchen or bathroom.

When I told the store clerk about my concerns, he pointed me to “Crawling Insect Killer Containing Diatomaceous Earth” from Garden Safe.

Diatomaceous earth is made from  fossilized remains of microscopic shells created by single-celled celled plants called diatoms. From a molecular standpoint, it consists mainly of silicon dioxide.  Visually, the stuff looks like a fine white powder. It seems nearly odorless.

According to the National Pesticide Information Center, “diatomaceous earth causes insects to dry out and die by absorbing the oils and fats from the cuticle of the insect’s exoskeleton. Its sharp edges are abrasive, speeding up the process. It remains effective as long as it is kept dry and undisturbed.”

At less than $12 for a four-pound bag, it seemed to be worth a try.

As with many other things, it was more complicated than that. The directions on the package were skimpy, so I started reading up on how to use it. All of the articles included dire warnings about not breathing it in or getting it in contact with your eyes or skin. Although I wasn’t sure I’d need them, I got out some rubber gloves and a mask to cover my mouth. Then I began to study how ants were getting into my house. 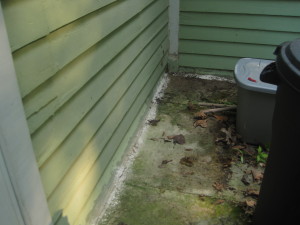 A strip of diatomaceous earth along the back wall of the house seems to be helping with the ant problem, although rain has washed it away once. (photo/Dave DeWitte)

I narrowed my search to the large limestone slabs that make up my back porch. I’d seen ants crawl down into the cracks between them, and determined they were crawling from under the slabs into my foundation and up into the kitchen through pipe penetrations or cracks in the floor.

Following the instructions, I spread a narrow two-inch band of the white powdery diatomaceous earth along the back wall of my house. I also dusted a little around the pipe penetrations under the sink and at the top of the basement wall.

Then it rained – a lot. The powder I’d spread outside, even though it was under the overhang of the eves, washed away.

I retreated the same area. Within about one week, the ants in the bathroom were gone. The ants in the kitchen persisted in smaller numbers, so I re-treated a third time. Within three weeks, they were also gone.

Diatomaceous earth seems to be one of those substances like baking soda that has a million and one uses. It’s supposed to be a good deodorizer, and is even mentioned in numerous articles as a way of treating parasites and as a nutritional supplement in pets.

I’ve seen enough to believe it’s effective against insects, so I spread some around in my basement in an effort to thwart powder post beetles and other creepy-crawlies. It’s even supposed to be useful against fleas, although product information cautions that it should be thoroughly vacuumed out of carpets after a short treatment period of a few hours.

So what I’ve found is that diatomaceous earth seems to work for me. I’m interested in exploring garden applications for it, but want to know more about safety before I go spreading it around my plants. I’m planning to make it a mainstay of my pest arsenal, because it is non-toxic, inexpensive and easy to use.