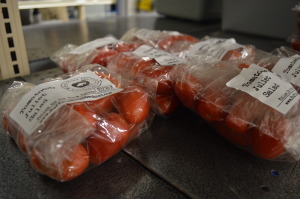 Tomatoes from Buffalo Ridge, near Central City, Iowa, are ready for distribution at the Iowa Valley Food Co-op in Cedar Rapids. (photo/Cindy Hadish)

Just this week, Overstock introduced a nationwide, online means of ordering fresh farmers market produce that can be delivered to your door.

While the Salt Lake City-based business touts its national scope, it hasn’t yet made its way to Iowa. Still, just last night, ProduceRun officially launched in Cedar Rapids and the web-based Iowa Valley Food Co-op continues to grow in Iowa.

Read more about these options, along with a list of area indoor farmers markets, below. The press release from Overstock is included at the end.

Mr. Grimm, 29, a founder of the Iowa Valley Food Co-op, has worked to extend sales options for local growers, including the online co-op, which serves as a “virtual” farmers market. 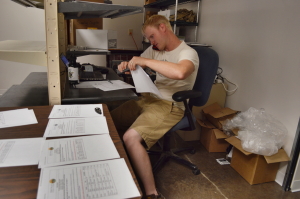 “I think the reason why some producers haven’t sold their products through the co-op is because they were not aware of the co-op or they just didn’t need any more sales outlets,” said Mr. Grimm, who also serves as Food System Planner and Interim Director for the Iowa Valley Resource Conservation & Development.

That perception will undergo a test as the winter farmers market season gets underway, at the same time Iowa Valley Food Co-op extends its reach and ProduceRun officially launches. 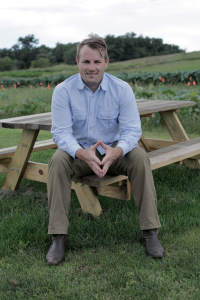 Mr. Pattison, 26, moved from Australia to Iowa for the express purpose of his online startup, which he wanted to begin as close as possible to the farmers who would market their products on the ProduceRun website.

He and his partner, Khristine McIntosh, 22, previously experimented with online sales of pomegranates, other produce and milk through a Facebook page.

“I wanted to see if there was any interest,” Mr. Pattison said. “We had 3,900 ‘likes’ in nine days. That was pretty impressive.”

Mr. Pattison’s family operates a sheep ranch and farm with cereal crops and a small amount of produce near Melbourne, Australia, while Ms. McIntosh’s family grows coconuts and vegetables in the Philippines. 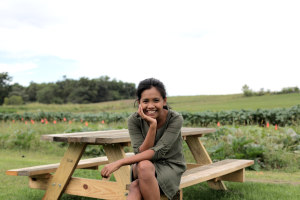 The two needed capital and mentoring to take their venture to the next level, which they found at the Iowa Startup Accelerator in Cedar Rapids. The accelerator provided $20,000 in investment funding in exchange for a 6 percent stake in the company, along with help from mentors such as Steve Shriver, president of Eco Lips.

ProduceRun began almost immediately when the two moved to Iowa in August, but formally launched Nov. 6, after which they plan to expand to Des Moines, and eventually, worldwide. In the meantime, they attended a Hawkeye football game and are otherwise trying to immerse themselves in Iowa culture.

Some of the products are crowd-funded, and need a certain number of sales before the farmer will make a trip to deliver the items. For example, Mr. Pattison pointed to a successful “chicken run,” in which 18 free-range chickens were delivered at the NewBo City Market in Cedar Rapids.

Others are one-on-one sales between the customers and farmers. ProduceRun receives 10 percent of sales from the producers and is not involved in delivery.

That format differs from the Iowa Valley Food Co-op, which collects a 10 percent fee on orders from both producers and members, while handling merchandise pick up during once- or twice-monthly distribution days.

The Cedar Rapids-based co-op, which has grown to more than 450 members since its inception in 2011, is adding an Iowa City distribution site in November and December.

Mr. Grimm noted that members have asked for additional sites to pick up the eggs, dairy products, meat, fruit, vegetables and more that customers order via the co-op’s website, but additional sites require more volunteers. The Hillel Center offers a venue for the holiday orders, when the co-op has its best sales, he said.

The co-op also is increasing outreach by opening orders to non-members during November and December. Typically, members pay an annual fee, used for operating expenses. 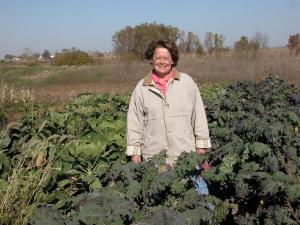 Laura Krouse stands in her kale field at her farm near Mount Vernon. (photo courtesy of Laura Krouse)

“I really like what they’re doing, so I wanted to support them,” she said.

Ms. Krouse, who is in her late 50s, said she wasn’t uncomfortable with the technology involved with the co-op, but has typically focused on the Community Supported Agriculture (CSA) side of her business, in which members receive weekly boxes of produce during the growing season.

She sees the younger generation readily embracing technology, while she and some farmers her age use it — Abbe Hills Farm has its own Facebook page, for example — but tend to not be as enthusiastic.

Ms. Krouse has been approached by another online farmers market outlet that is working from the coasts into Iowa, but said demand for her vegetables already exceeds her supply.

Still, she enjoys selling eggs and more at the winter Mount Vernon Farmers Market, especially to interact with customers.

“I really appreciate the transparency that comes from doing business face-to-face,” Ms. Krouse said. “I think it’s important that people know about their food and can talk to the farmer and I like the sense of community in getting the food and the people all in one place. You’re never doing to get that with your computer.”

Most of Eastern Iowa’s indoor markets begin in November and run through spring. 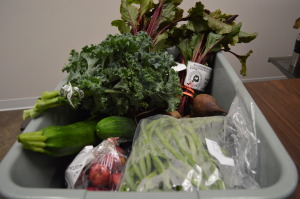 Fresh produce is ready for a customer at the Iowa Valley Food Co-op in Cedar Rapids, Iowa. (photo/Cindy Hadish)

Brenda Christner, business manager for the Johnson County Agricultural Association, said the new indoor market that began last year at the Johnson County Fairgrounds is expected to grow after an experiment this fall with dates in September and October. The market will likely add vendors coming from Iowa City’s indoor farmers market, Ms. Christner noted.

Iowa City decided to end its indoor markets because of the new Lucky’s Market that will open in 2015 at the Iowa City Marketplace (former Sycamore Mall) where the winter market had been held, said Cassidy Bell, Iowa City’s market supervisor.

Iowa City’s two holiday markets will still be held at the former mall.

See a list of other Eastern Iowa winter farmers markets here and find updates throughout the season on the Homegrown Farmers Market list.

Additionally, fresh produce and other local foods can be ordered online through the Iowa Valley Food Co-op: www.iowavalleyfood.com and Produce Run: www.producerun.com

Following is the press release from Overstock:

SALT LAKE CITY — Nov. 5, 2014 – Overstock.com, Inc. (NASDAQ: OSTK) announces the launch of a new Farmers Market section within the Overstock website. This market of hand-picked products offer customers throughout the U.S. access to home delivery of seasonal, healthy food, grown and produced in their area.

“We’re integrating small farms, community-supported agriculture (CSA), and co-ops into our technology so as to allow consumers in their area to buy and arrange delivery through Overstock,” said Overstock CEO Patrick M. Byrne. “We want to streamline the farm-to-table process to provide everyone access to healthy food, delivered to their doorstep.”

Each product featured in the Farmers Market is accompanied by a biography of the farmer or specialty food purveyor who grew it, along with a look into their production processes, in order to give customers a better idea of the food they are purchasing.

Byrne said shoppers will also find a sense of social community by providing health-focused recipes and seasonal produce guidance alongside the selection of fresh and local food products.

The Farmers Market program requires no up-front costs for suppliers to join, instead using a revenue-sharing model that allows them to get their products on Overstock with minimal changes to their existing procedures.  Farmers, CSAs, and co-ops interested in joining the program are encouraged to contact the Farmers Market team at farmersmarket@overstock.com for more information.

The Farmers Market is the latest initiative in Overstock’s collection of sustainable businesses that provides a way to give back to communities worldwide. Other community-focused initiatives include Worldstock.com, Overstock’s fair trade division selling products handmade by artisans all over the world, Main Street Revolution, which features products made in America by individuals and small businesses, and the company’s on-site Pet Adoption feature, which allows animal shelters across the country the chance to use Overstock’s shopping site as a free service to connect consumers to adoptable pets.

Overstock.com, Inc. (NASDAQ: OSTK) is a discount online shopping retailer based in Salt Lake City, Utah that sells a broad range of products including furniture, rugs, bedding, electronics, clothing, and jewelry.  Worldstock.com, a fair trade department dedicated to selling artisan-crafted products from around the world offers additional unique items.  Main Street Revolution supports small businesses across the United States by providing them a national customer base.  Forbes ranked Overstock in its list of the Top 100 Most Trustworthy Companies in 2014.  The NRF Foundation/American Express 2011 Customer Choice Awards ranked Overstock #4 in customer service among all U.S. retailers.  Overstock sells internationally under the name O.co.  Overstock Shopping (http://www.overstock.com and http://www.o.co) regularly posts information about the company and other related matters under Investor Relations on its website.