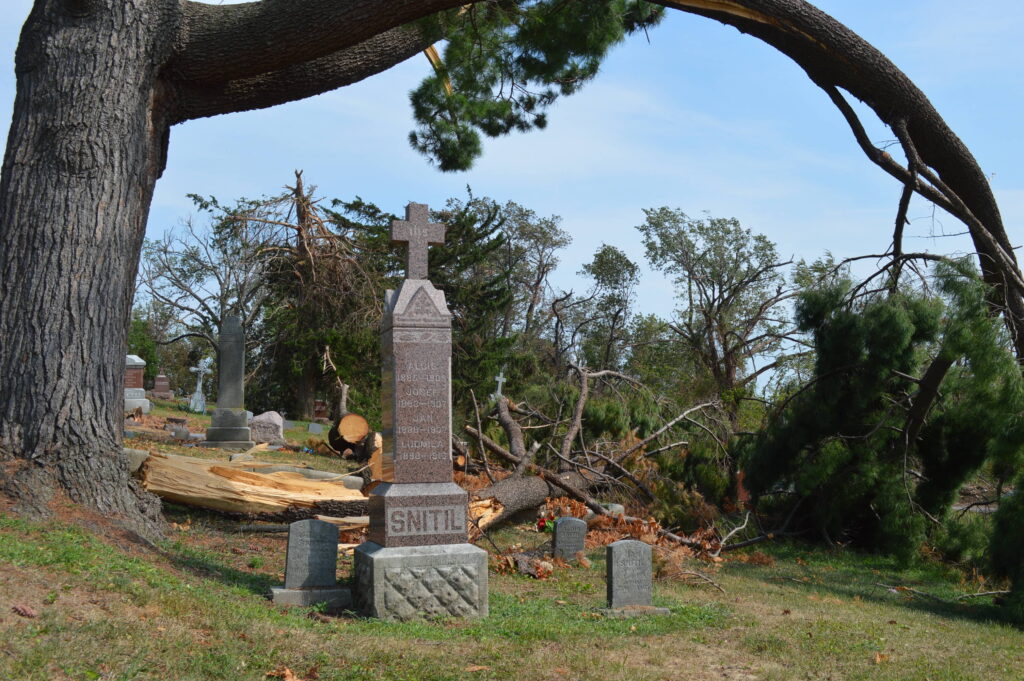 The limb of a tree remains arched over gravestones, while others remain on the ground at St. John’s Cemetery on Sept. 6, 2020, nearly one month after the Aug. 10 derecho windstorm in Cedar Rapids, Iowa. (photo/Cindy Hadish)

The derecho windstorm that packed up to 140 mph winds Aug. 10 in Iowa — equivalent to a category 4 hurricane — not only destroyed homes, businesses and trees, but wreaked havoc on some of the state’s final resting places.

Cemeteries in the Cedar Rapids area were particularly hit hard when the straightline windstorm, which killed three Iowans, mangled century-old trees and toppled headstones, some dating back to the 1800s. 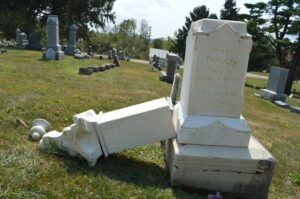 A gravestone dating back to the 1800s was toppled in the Aug. 10 derecho at the Fairfax Cemetery in Iowa. (photo/Cindy Hadish)

Even before the unprecedented storm, many cemeteries had difficulties with maintenance; particularly ones with older gravesites where no living relatives remained in the family to provide that care.

Related: See more photos from the initial days after the derecho windstorm

“The cemetery use to be like an art exhibit in the past. Folks would come and picnic and reminisce about their ancestors,” said Kevin Lee, president of the Decorah Genealogy Association, which has funded workshops in northeastern Iowa and garnered donations for gravestone improvements. “Now they are abused by large machinery and details are eliminated, such as foot stones.”

Lee, who serves on the boards of two cemetery associations, attributed some of the destruction to riding lawn mowers with big blades, heavy weed-whacker lines and sprays that are hard on marble and limestone, which can cause erosion and shifting of the headstones. 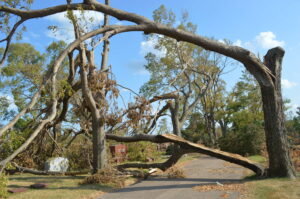 Numerous trees were broken in half by the Aug. 10 derecho at the Czech National Cemetery in Cedar Rapids. (photo/Cindy Hadish)

Cemeteries hoping to recover after the derecho can look to places such as the Depot Outlet in Decorah, which has funded gravestone workshops and cemetery associations to perform the work. Other sources are through well-off cemeteries that offer residual funds for improvements, Pioneer Cemetery Associations and township trustees, which can levy taxes for graveyard care.

Otherwise, it is up to individuals, such as Lee, who volunteers at the two cemeteries where he is a board member.

He warned against repair attempts by people who aren’t familiar with proper preservation techniques. “Everything from tire cleaner to asphalt has been used to ‘repair’ stones,” he said, advising against those methods.

Some of the long-term answers could come in the form of mowing lanes or only parts of the cemetery where people can walk to the headstones, Lee said, or planting prairie pollinators that are dense enough to keep out undesirable plants and lessen maintenance needs.

At least one cemetery association has started an online fundraiser to help with the costs of the derecho damage. 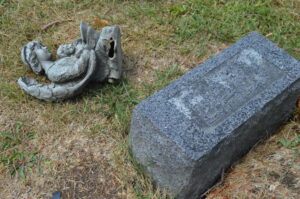 An infant’s headstone was among those damaged during the derecho at the Fairfax Cemetery. (photo/Cindy Hadish)

Patty Soukup said the Fairfax Cemetery needs help repairing more than 35 gravestones that need to be pieced back together and placed on new foundations, with some of the stones dating back to the 1860s.

“We need the proper supplies, equipment and some technical advice,” the Fairfax Cemetery’s GoFundMe page notes.

Fairfax Cemetery officially started in 1863, but the first burial was in 1857.

Some of the other cemeteries in need of help include the following: 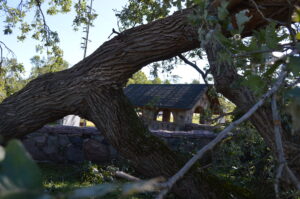 The entrance of Oak Hill Cemetery in Cedar Rapids is shown after the derecho. (photo/Cindy Hadish)

Located along Mount Vernon Road and 15th Street SE in Cedar Rapids, the cemetery was established in 1854 and is the final resting place for Cedar Rapids pioneers such as Judge George Greene and Sampson Bever, and more than 280 Civil War veterans.

Known for its century-old giant oaks, numerous trees were cracked, broken in half, completely uprooted or otherwise damaged in the storm.

Find more information about Oak Hill Cemetery, including how to donate, at: www.oakhillcemeterycr.com 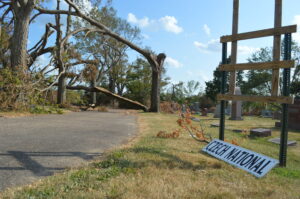 Professor Bohumil Shimek, a botanist at what is now the University of Iowa, designed and platted the area, with a dedication May 24, 1896. 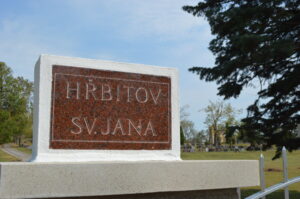 Older sections of the cemetery date back to the 1800s, with notations such as “otec,” for father, and “dcera” for daughter, engraved on the older headstones of Czech families.

St. Wenceslaus, which also sustained damage in the derecho, was founded in 1874.

More: See photos of some of the historical buildings damaged in the derecho. 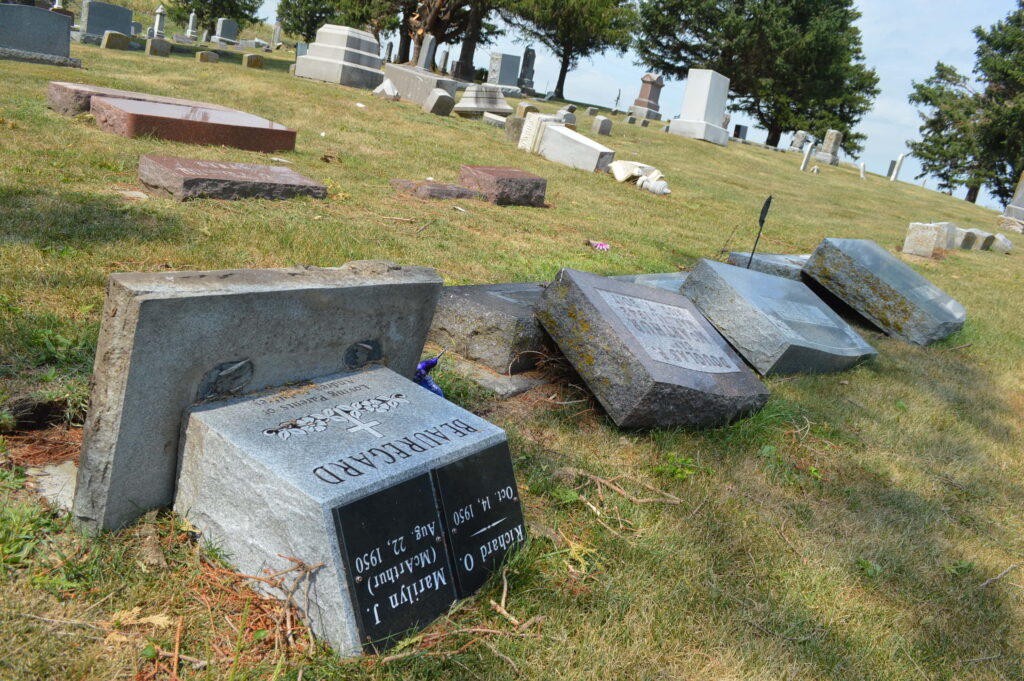 Multiple headstones were damaged during the derecho at the Fairfax Cemetery in Iowa. (photo/Cindy Hadish) 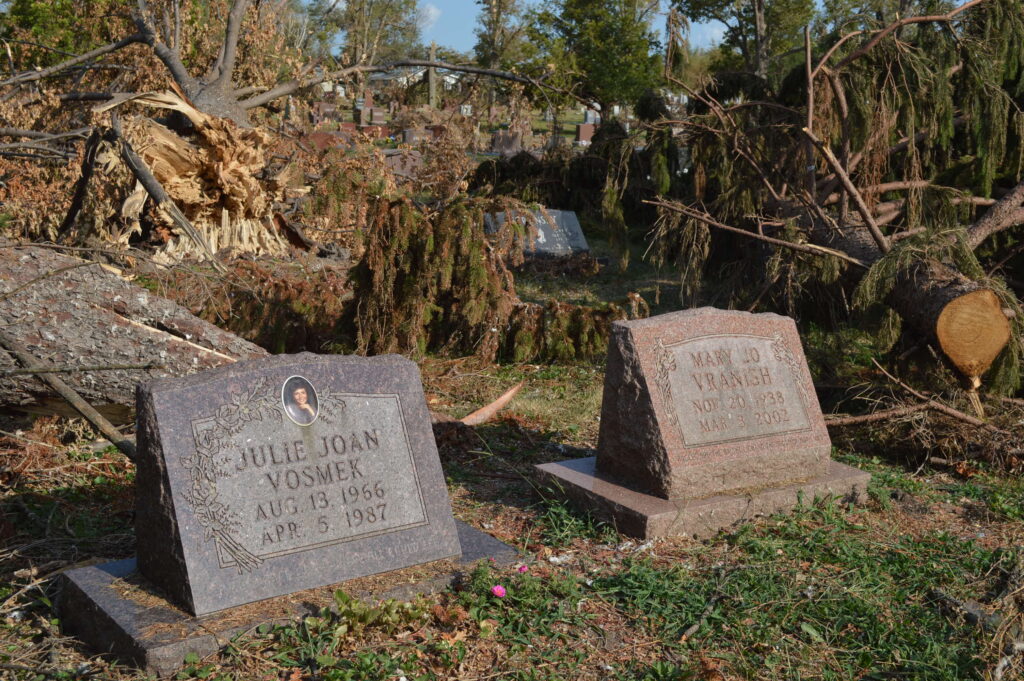 Fallen trees spared some of the headstones at the Czech National Cemetery in Cedar Rapids, Iowa. (photo/Cindy Hadish) 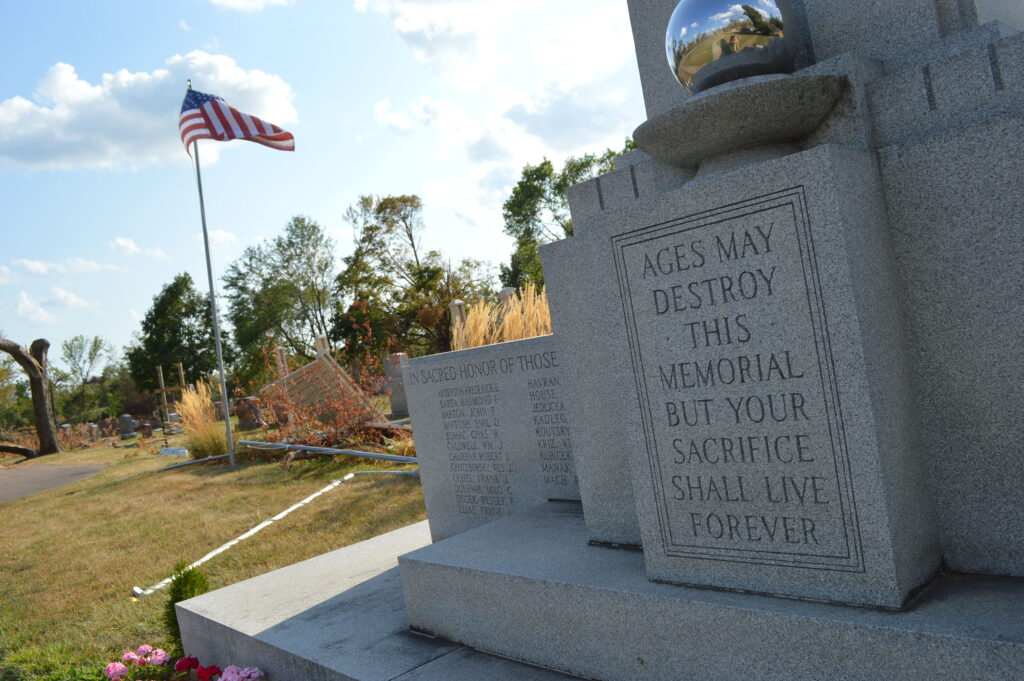 The World War II memorial was damaged at the Czech National Cemetery during the derecho. (photo/Cindy Hadish) 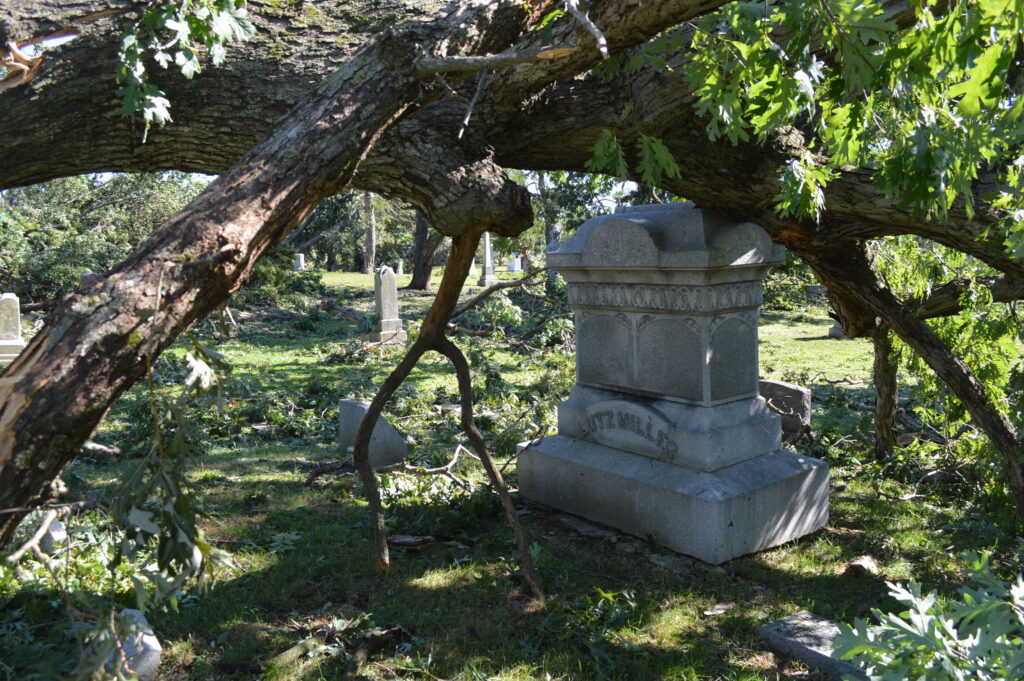 Headstones were damaged during the derecho at Oak Hill Cemetery in Cedar Rapids. (photo/Cindy Hadish) 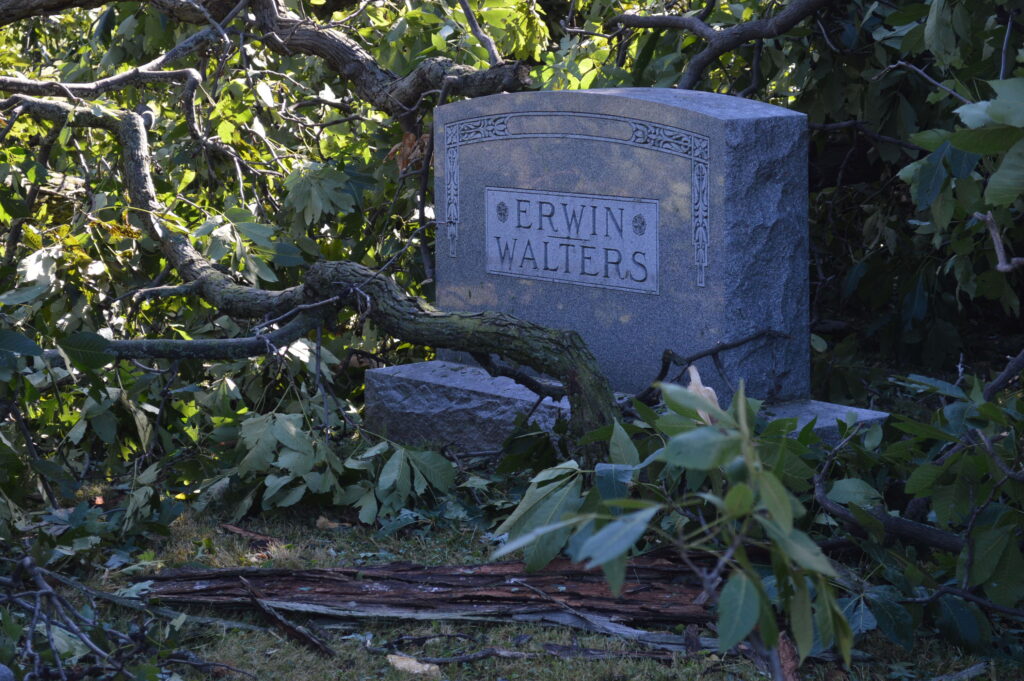 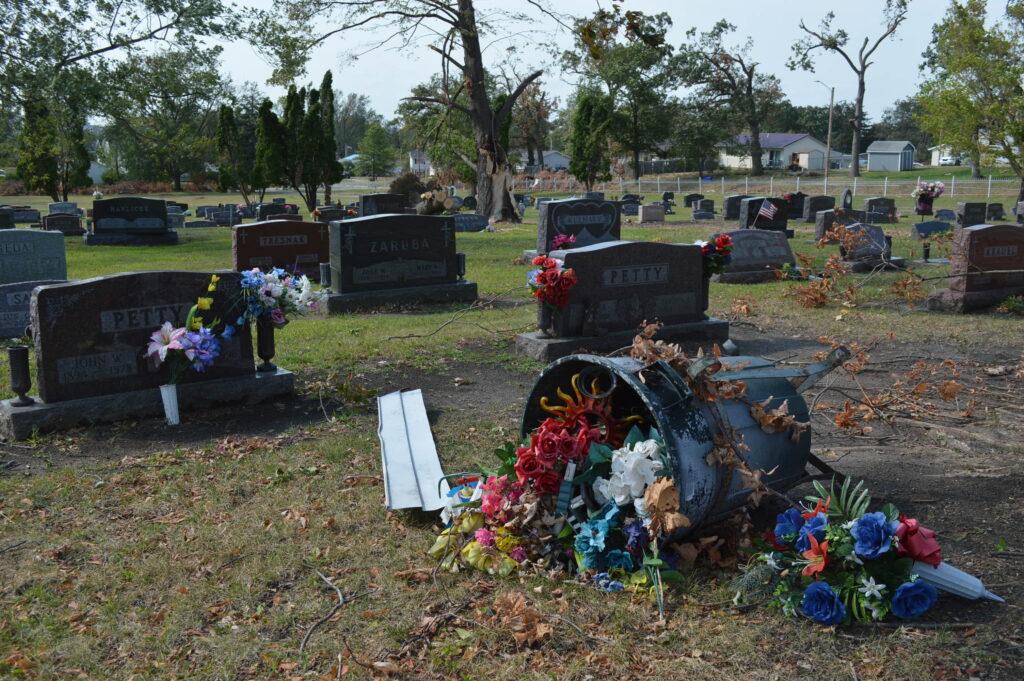 Flowers spill from a garbage can at St. John’s Cemetery. (photo/Cindy Hadish) 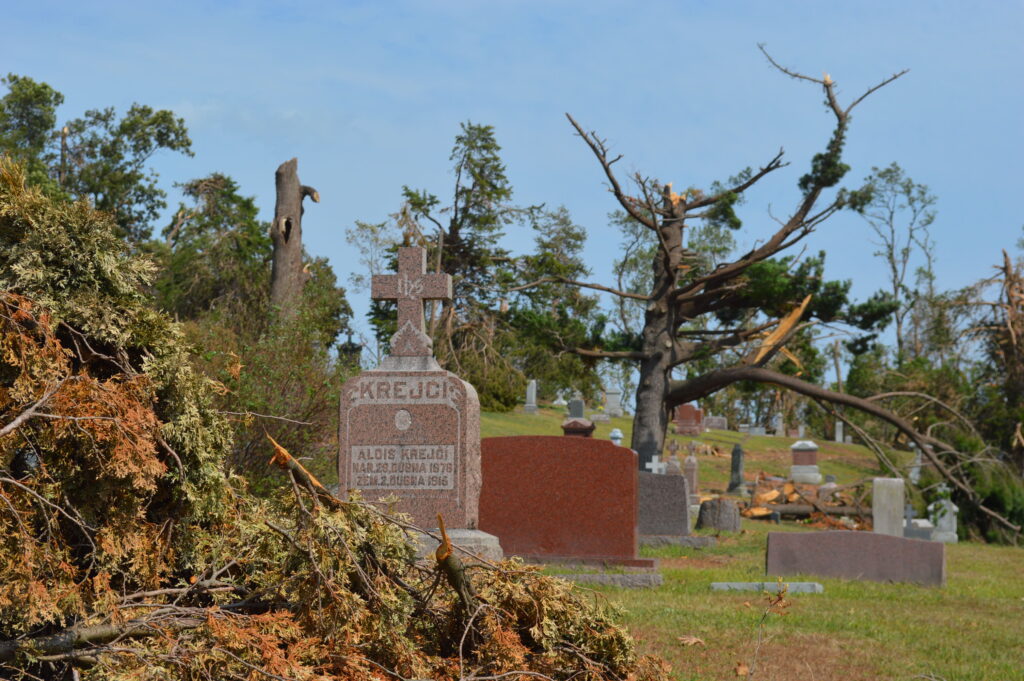 Trees and headstones were damaged during the derecho at St. John’s Cemetery in Cedar Rapids. (photo/Cindy Hadish) 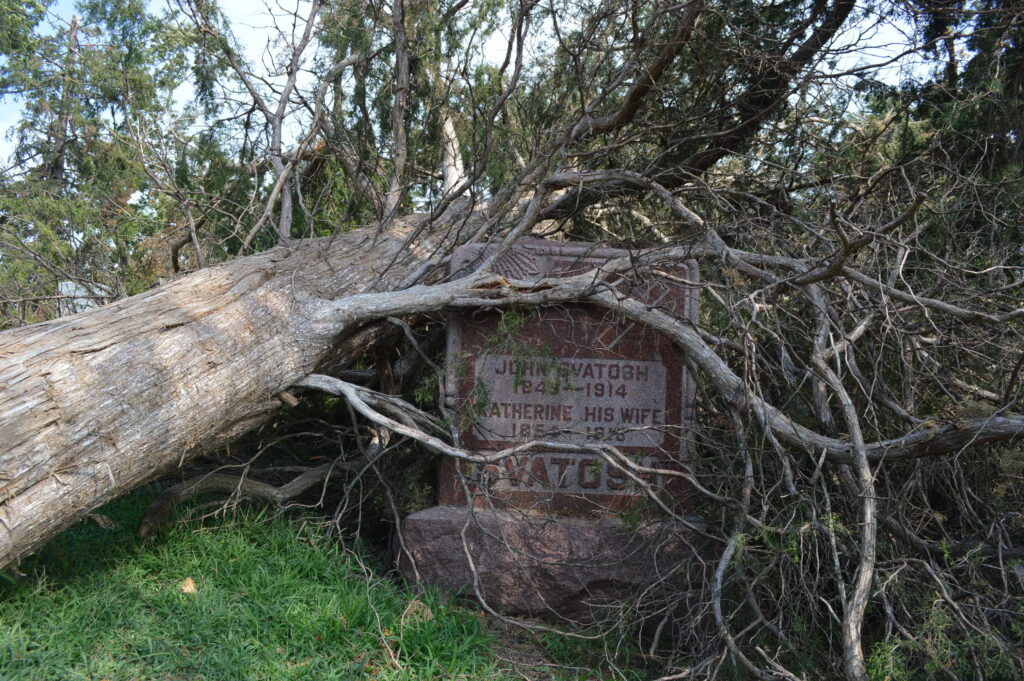 A fallen tree obscures a headstone at St. John’s Cemetery in Cedar Rapids on Sept. 6, 2020, nearly one month after the derecho. (photo/Cindy Hadish)