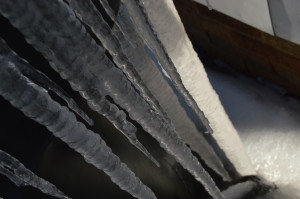 A new report shows frost in the upper 48 inches of topsoil across Iowa has prevented groundwater recharge since November. (photo/Cindy Hadish)

With all of the snow this winter, it would seem that Iowa’s drought worries should be long-gone.

That’s not necessarily true, as a new report from the Iowa Department of Natural Resources shows.

But despite all of the snow, frost in the upper 48 inches of topsoil across the state has prevented any measurable groundwater recharge from occurring since late Nov. 2013. The report notes that adequate rainfall this spring will be critical across most of Iowa to recharge the alluvial and shallow bedrock aquifers and prevent drought conditions from reoccurring prior to the peak summer water usage.

According to the report, precipitation for 2013 ended about normal; the first half of the year received about 7.4 inches of precipitation over normal and the second half of the year 7.7 inches under normal. Drought conditions improved dramatically during the course of the year, yet the middle portion of central Iowa remained in moderate drought by December’s end.

Shallow groundwater improved, but that was probably due to cooler temperatures rather than recharge, given the dry summer. While frost in the upper 48 inches of topsoil across the state has prevented groundwater recharge since November, soil moisture reserves are better than a year ago.

For a more thorough review of Iowa’s water resources in 2013, go to http://www.iowadnr.gov/watersummaryupdate.