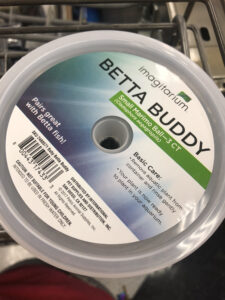 Authorities are asking Iowans to properly dispose of an aquarium product, which could contain an invasive species that can harm Iowa’s waterways.

The Iowa Department of Natural Resources (DNR) has confirmed that the popular product — sold at some aquarium supply stores and pet stores in Iowa — may contain zebra mussels, a highly invasive species that can cause severe damage to the food chain and infrastructure if released in lakes and rivers.

See more from the DNR:

The affected products are moss (Marimo) balls, which are commonly sold in pet stores to help absorb harmful nutrients in the water and limit the growth of undesirable algae in home aquariums. Moss balls recently distributed nationwide were contaminated with zebra mussels. A container of Marimo balls sold as “Betta Buddy” was first found to be contaminated with an adult zebra mussel at a Petco store in Washington state on March 3. Since then, contaminated Marimo balls have been found in pet and aquarium stores in several states.  Pet stores across the nation, including Iowa, have removed the product from their shelves. 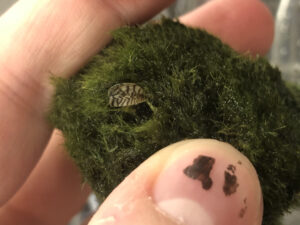 A moss ball is shown with a zebra mussel. (photo/U.S. Geological Survey)

“State and federal law enforcement have been checking pet stores across Iowa and removing the moss balls if they hadn’t been removed already,”said Kim Bogenschutz, aquatic invasive species coordinator for the Iowa DNR.

Aquarium owners are urged not to purchase this product from stores or online. If you have bought this item in the last month, dispose of it properly and sanitize your tank(s) using the following guidelines to prevent the spread of zebra mussels from aquariums.

Aquarium owners who may have infected aquariums should remove the fish from their aquarium and soak the tank, substrate, rocks, décor, and filter in household bleach (1/3 cup  of bleach per gallon of water) for 15 minutes before disposing the water down a household sink. Rinse off all items before setting up the aquarium. Use a dechlorinating product to neutralize any residual chlorine before reintroducing aquatic life.

“We need the public’s help to prevent the spread of zebra mussels from aquariums and fish tanks into our water bodies,” said Bogenschutz. “Please make sure you dispose of any Marimo balls and aquarium water properly so the waters we all enjoy remain invasive-free.”

Zebra mussels look like small, D-shaped clams that have alternating light and dark bands. Most are less than one inch long. They are filter feeders that can form dense clusters as they attach to hard underwater surfaces. Large infestations may interfere with aquatic food chains, kill native mussels, clog water intakes, increase algae blooms, and cover beaches with dead shells. Currently there is no effective treatment to control zebra mussels once they have infested a lake.

It is illegal to possess or transport prohibited aquatic invasive species, such as zebra mussels, in Iowa.

Find more information about aquatic invasive species and how you can help prevent their spread in Iowa’s waters on the DNR’s website at www.iowadnr.gov/ais.

More from the DNR: Four Iowans convicted in poaching case