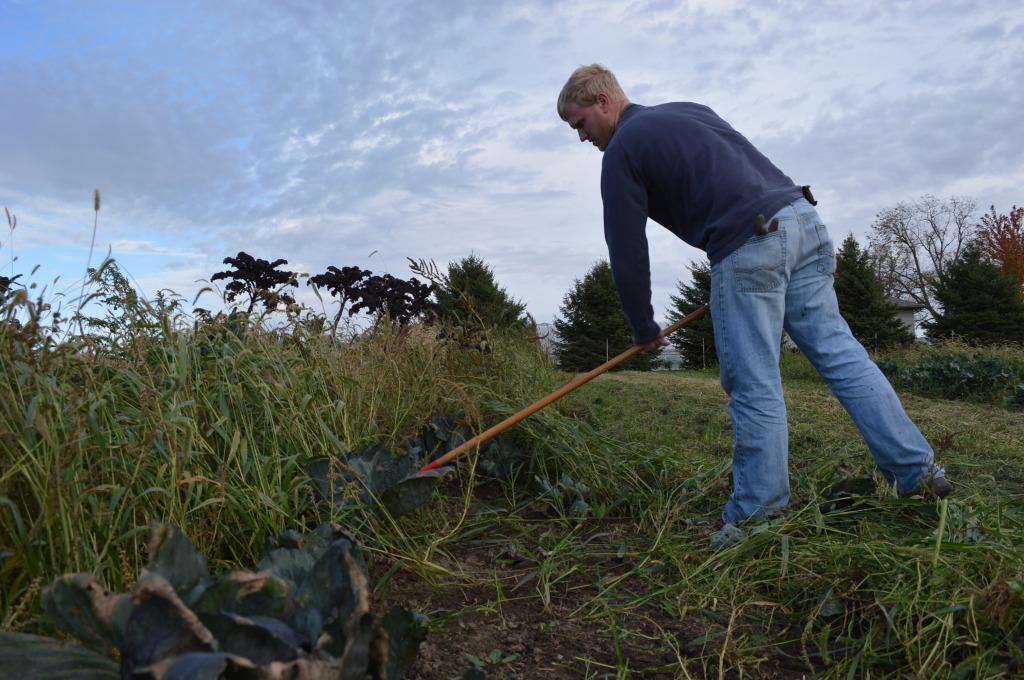 Jason Grimm hoes around cabbage and kale earlier this fall at the family farm near Williamsburg. (photo/Cindy Hadish)

“He knows everyone,” said Les Beck, Linn County Planning & Development Director, who has served on several conference panels with Grimm. “Whenever I introduce him, I say he is one of the most connected people in Iowa, as far as local foods go.”

Grimm, 29, is a Food System Planner for the Iowa Valley Resource Conservation & Development and has been serving as the RC&D’s interim director, working with residents in Benton, Iowa, Johnson, Linn, Poweshiek and Tama counties to improve the area’s economy, environment and quality of life. 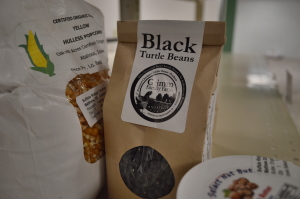 In addition to his roles in the RC&D and with other organizations, Grimm is a food producer.

One of those outlets is especially close to Grimm. He is a founder of the Iowa Valley Food Co-op, a web-based cooperative that connects consumers to farmers. The online co-op serves as a “virtual farmers market,” where members select from in-season produce, local meats, honey, home-baked goods, herbs and more.

Grimm has worked to increase the distribution days, when the products are brought for pick up at a central location in Cedar Rapids, and added an Iowa City distribution site for the busy holiday season.

The co-op, which processes orders and payments and facilitates deliveries, has grown to more than 450 members since it began in 2011.

During the course of working with the co-op’s farmers and in other endeavors, Grimm began returning to his roots. 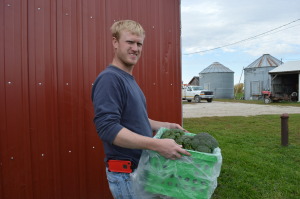 His family – parents Lyle and Peggy Grimm and grandparents Norman and Lorraine Grimm – farm in rural North English, just south of Williamsburg. The 125-acre farm, which sits above the English River Valley, has primarily been used to grow corn, but Grimm has gradually been using small parcels for his Grimm Family Farm enterprise.

This past year, he grew three-quarters of an acre in potatoes and 5 1/2 acres in edible beans, his biggest crop, along with a large garden where he nurtured 400 broccoli plants; lacinato, or “dinosaur” kale; as well as more varieties of kale and other vegetables. He also processed 400 chickens to sell.

“I didn’t think I’d be doing this type of scale,” Grimm said. “I thought I’d be helping dad and grandpa on the farm and that’s it.”

Grimm earned his degrees in Landscape Architecture and Environmental Studies from Iowa State University, with an emphasis in regional and urban food system design and planning.

“I went to school and didn’t think there would be any reason for me to farm,” Grimm said, but as he helped facilitate opportunities for other farmers, and in helping his parents and grandparents on their farm, took a new look at becoming a producer.

“I see opportunities of things I can grow and try to fill those niches,” he said. For example, restaurants interested in local and seasonal foods were asking for grains and legumes. Because grains need an additional milling process, Grimm chose to grow beans.

His black turtle beans can now be found in the cheese, rice and bean burrito at Local Burrito in Iowa City and accompanying chickpeas, avocado and ancho pepper aioli on brioche in the Black Bean Falafel Burger at Atlas, a popular restaurant in downtown Iowa City. 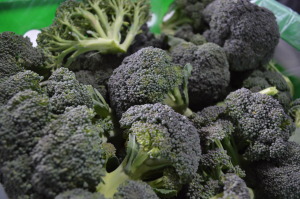 He views the wholesale enterprise he developed with Hy-Vee for himself and several other co-op producers among his successes. Grimm sold “a lot” of cucumbers, along with kale, leeks and broccoli through the Hy-Vee Homegrown pilot program.

“It seemed like we were making an impact,” he said.

Selling to a variety of outlets – restaurants, schools, stores and co-ops – is advice that Grimm recommends. While farmers markets offer a higher return, they can be time-consuming, especially for producers like Grimm, who work full-time.

The family farm is not certified organic, but he uses organic practices, with vintage methods of farming, including a 1950s tractor for his planter. Weeds in his enterprise are controlled with hoes or mechanical cultivation.

Grimm is being mentored through a Practical Farmers of Iowa initiative that also serves as a savings incentive program.

He and his wife, Hannah, and their 1-year-old son, Elliot, recently moved from Coralville to Williamsburg to be closer to the farm. Hannah works in North Liberty, while Jason squeezes in farming between his RC&D obligations.

Since he started in his post, Grimm has been a tireless advocate for local foods, serving as president of the Iowa Food Systems Council Board of Directors among other duties.

“I don’t know when he sleeps,” Linn County’s Beck said, noting that Grimm is involved in numerous organizations at the local and state levels. “He’s a very accomplished guy, but really down to earth and very humble.”

Beck described Grimm as one of the “bright young people we want to keep in the state.”

That wasn’t necessarily Grimm’s original intent. He worked internships in Oregon and downtown Chicago before returning to Iowa.

“The people looked like robots walking off the train,” Grimm said of the daily commutes in Chicago, which, he realized, wasn’t the life he wanted to lead.

Instead of designing parks and parking lots, as he might have done with his degree, Grimm preferred to focus on urban agriculture to help make a difference in the sustainability of cities, he said, noting the connection between a local food system and a community’s resilience.

Five years ago, when he started in the urban agriculture movement in Iowa, progress seemed slow. “Now it seems like every organization wants to be involved,” he said.

The number of food councils, coalitions and task forces on which Grimm serves is impressive.

He is a founder and adviser to both the Linn County Food Systems Council and Johnson County Food Policy Council. 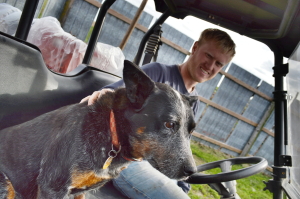 Jason Grimm and Ginger, one of the family’s dogs, are shown at the farm near Williamsburg in October 2014. (photo/Cindy Hadish)

As the Iowa Valley RC&D’s Food System Planner, Grimm leads the RC&D’s Regional Food Initiative. He also coordinates the Field to Family Regional Food Coalition, a broad group of partners in the region that Grimm gathers together a few times annually.

True to his farming roots, however, the answer is easy, if given a choice between his desk job and working the land.

Even as he battles the last of the season’s weeds by hand at the family farm, Grimm said, “I’d rather be out here than in the office.”