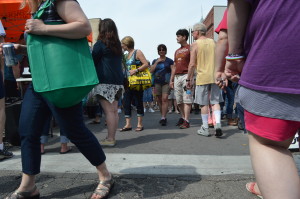 Customers packed the streets of downtown Cedar Rapids during the first Downtown Farmers Market of the 2015 season. Even larger crowds are expected downtown for the Fourth of July. (photo/Cindy Hadish)

CEDAR RAPIDS – Watch for even more people than usual rocketing to downtown Cedar Rapids over the Fourth of July.

In addition to the Downtown Farmers Market, from 7:30 a.m. to noon this Saturday, the Fifth Season Race is set to begin at 8 a.m. at the Cedar Rapids Museum of Art, 410 Third Ave. SE.

The 8k race draws runners from all over the country, with 32 states represented last year. A 5k event and Kid’s Races are also featured in the Fourth of July tradition in Cedar Rapids.

The Freedom Festival’s pancake breakfast will be served from 8-11 a.m. inside the Veterans Memorial Building (Armory) at 50 Second Avenue Bridge. Parking is available in the Mays Island Parkade, but vehicles must be removed by noon.

Also that morning, the Freedom Festival Car & Bike Show is scheduled from 8 a.m. to noon on the Third Avenue Bridge.

Gates to the Freedom Festival Concert open at 2 p.m. at the  McGrath Amphitheatre. The concert features Eric Paslay with special guests Chuck Wicks, A Thousand Horses, Logan Mize and Natalie Stovall and the Drive. The night concludes with the celebration of Freedom Festival Fireworks.

A record crowd of nearly 22,000 people packed the streets of downtown during opening day of the Downtown Farmers Market in June. More than 200 vendors will sell vegetables, baked goods, handcrafted items and more during the July Fourth market on Third Street SE and surrounding avenues, from First to Fifth Avenue SE.

The theme of the market is Baseball Day, and market-goers can find related activities in the parking lot on the corner of Third St. SE and Fourth Ave. SE. Baseball players and mascots from the Cedar Rapids Kernels and Waterloo Bucks will be signing autographs and taking photos. There will also be mitts and baseballs for anyone wanting to play catch.