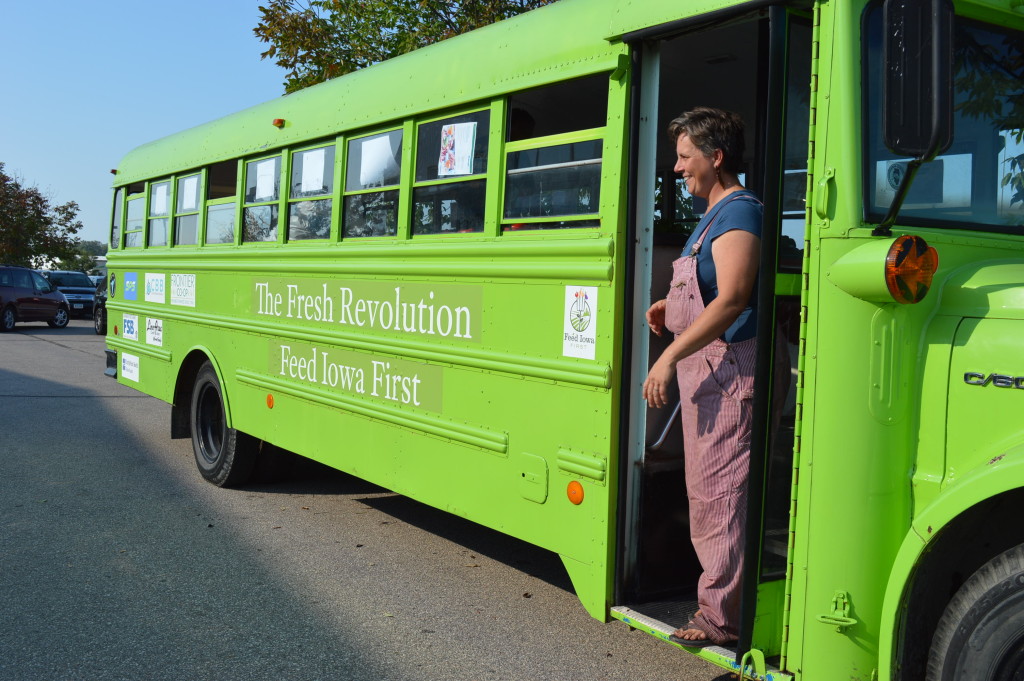 “Fresh vegetables,” she calls out to small groups of people as they walk past her converted green bus. “They’re organic! They’re free!”

The last part is the most difficult point in convincing passersby; those fresh, organic vegetables on the Feed Iowa First bus are there for the taking, for anyone in need. 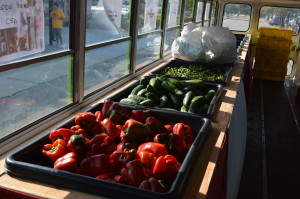 Vegetables are ready for the taking inside the Feed Iowa First bus on Friday, Sept. 4, 2015, in Cedar Rapids. (photo/Cindy Hadish)

“This helps so much for people who have nothing,” said Dawn Leiser of Anamosa, one of dozens of people who stopped by to chat with Ms. Kendrick after seeing the bus earlier this month at the Five Seasons Stand Down at Veterans Memorial Stadium.

“This is something that’s needed,” said Ms. Leiser, who gardens with her husband, but gratefully accepted some of the fresh green beans from the Feed Iowa First bus. “People don’t realize how much better food is when you grow it.”

Since 2011, she has made it her mission to address the needs of people who go hungry in her home state. Ms. Kendrick, 38, founded the nonprofit Feed Iowa First as a way to grow healthy fruits and vegetables in Iowa, where much of the state’s cropland isn’t used for growing food for people.

Feed Iowa First started at one church in Cedar Rapids, where Ms. Kendrick, who has a master’s degree in sustainable food systems from Iowa State University, demonstrated that green space outside the church could be put to use as a large garden.

Now at 24 churches, community agencies and businesses in the Cedar Rapids area, Feed Iowa First works with volunteers to grow and harvest the food and donate it to food pantries and Meals on Wheels. Ms. Kendrick does much of the work herself as a volunteer. 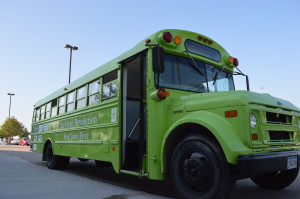 The Feed Iowa First bus has been making the rounds in Cedar Rapids, Iowa, delivering fresh produce for free to people in need. (photo/Cindy Hadish)

Only in the past few weeks has she taken her efforts on the road. The organization raised money to purchase and convert a bus to deliver the fresh produce directly to people in need.

“This is an easier way to move it,” Ms. Kendrick said of the tubs of deep green broccoli, curly-leafed kale, mounds of cucumbers and bright red tomatoes.

Millhiser Smith, ADM and other sites where the produce grows are listed alongside the food inside the bus.

Several veterans spent time discussing favorite uses for garlic and other recipes and many offered their thanks to Ms. Kendrick as they exited, while she offered suggestions in preparing the celery that looked much greener than store-bought varieties and uses for kale.

In addition to the veterans’ event, the Feed Iowa First bus, dubbed “The Fresh Revolution,” has traveled to and distributed free fruits and vegetables at places such as Green Square Meals, Mission of Hope and Westdale Court Apartments.

“Many of the people in apartment complexes are in a lot of need,” Ms. Kendrick said.

The effort is patterned, in part, on similar ventures in places such as Chicago, Detroit, New Orleans and New York, where “mobile markets” bring fresh produce to under-served neighborhoods to help combat obesity, diabetes and other health problems in inner-cities.

One difference, however, is that Ms. Kendrick gives away the produce, while the others are sales ventures. Even that can be challenging sometimes.

Ms. Kendrick had a tough time convincing some of the veterans at the Stand Down to board the bus.

“I’m a vegetable pusher,” she said with a laugh, after convincing an older veteran to take a bag of fresh carrots. 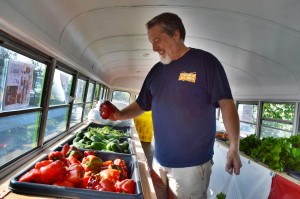 She found it easy to relate to the veterans and driving the bus wasn’t too much of a stretch for her after driving a tanker in the Army.

Ms. Kendrick is a veteran of the war in Afghanistan, where she observed people firsthand suffering from hunger. She decided to tackle the problem locally after earning a degree in agronomy.

“Our food system is in trouble,” she repeats to the veterans and others who stop by the bus.

Feed Iowa First is Ms. Kendrick’s way to address those issues, as well as her own way to cope.

Suffering from post-traumatic stress disorder, she finds healing through farming and would like to see other veterans do the same.

Ms. Kendrick was one of three women veteran farmers featured in the documentary film, “Terra Firma,” and last year was honored in Washington, D.C., as one of 10 Women Veteran Leader “Champions of Change.”

“This is what I do to reintegrate into society,” she said. 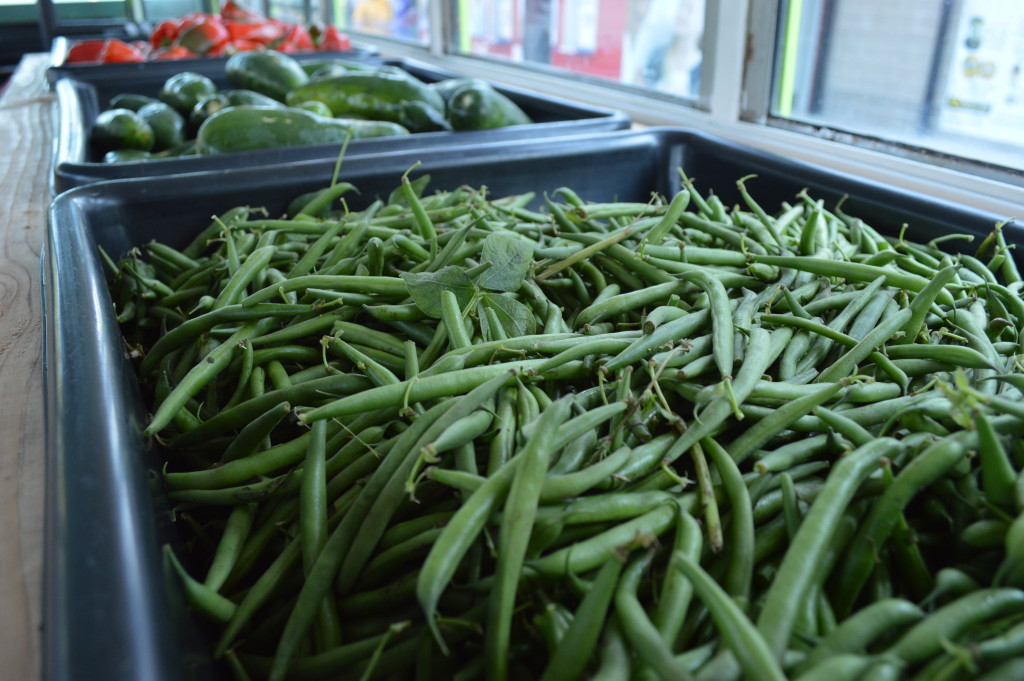 Green beans were among the produce offered for free inside the Feed Iowa First bus during the Five Seasons Stand Down on Friday, Sept. 4, 2015. (photo/Cindy Hadish)