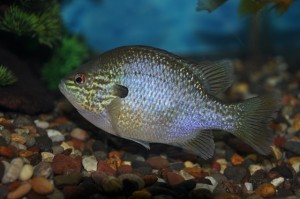 The Iowa Department of Natural Resources has found a fish thought to be long-gone in the state.

State and national scientists are working to positively identify the fish, believed to be a longear sunfish, the DNR reported. If proven to be the species, this would be the first time in more than 80 years that the fish has been confirmed in Iowa.

The fish is being held alive by the DNR until it can be positively identified.

Iowa DNR fisheries staff collecting fish for a fishing clinic in early July captured the fish in the Mississippi River.

“If this proves to be a longear sunfish it will be the first time since 1932 the species has been positively identified in Iowa,” DNR fisheries technician Adam Thiese, who collected the fish, said in a press release. “How it got here and where it came from remains to be determined. For those that work in the fisheries field, both state and nationally, anytime an uncommon species can be documented, it’s an exciting discovery.”

The DNR reports that leading national ichthyologists believe it is a longear sunfish. A fin clip has been collected to verify. Once listed as common in bayous around Muscatine, they have been extirpated from the state for more than eight decades.