“Flood cats” still in need of help in Cedar Rapids 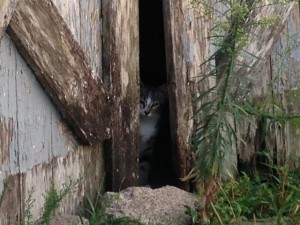 A stray cat peers out from a building in the New Bohemia neighborhood of Cedar Rapids, Iowa. Five years after the city’s epic floods, volunteers are still caring for the cats that live in abandoned buildings. (photo/Beth DeBoom)

CEDAR RAPIDS – In 2008, epic flooding left more than 1,000 homes and businesses vacant in Cedar Rapids, leading to an explosion in the city’s stray cat population.

“Our goal is to stop the population growth while continuing to care for the cats,” said Patterson, who fed a half-dozen kittens and adult cats in the New Bohemia area of southeast Cedar Rapids on a recent morning.

The caregivers pay for the cat food out of their own pockets, with some food and money occasionally donated “by caring people who sympathize with what we are doing,” she said.

Volunteers have trapped more than 60 cats since the flood to have them vaccinated and spayed or neutered in order to better control the population breeding in the vacant buildings.

Some, however, cannot be helped.

One special cat, named Tuffy by the volunteers, was living in an abandoned home in the Time Check neighborhood of northwest Cedar Rapids when he was found.

The black and white tomcat was timid at first, but enjoyed basking in the sun and eating canned food after his rescue.

Unfortunately, Tuffy suffered from a serious respiratory disease and was beyond treatment due to his compromised immune system. He died peacefully in the arms of one of his caregivers at Frey Pet Hospital.

“He was a true survivor and an inspiration to us all,” read a notice in the newspaper, placed after the cat’s death. 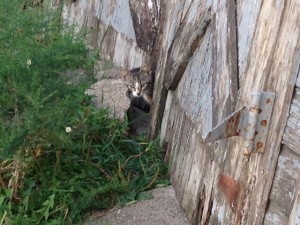 Stray cats that are trapped by volunteers are vaccinated and spayed and neutered. The volunteers pay for cat food themselves and rely on donations for the spay/neuter program. (photo/Beth DeBoom)

Patterson said donations made in Tuffy’s name were used to fund the spay/neuter program for cats in the Time Check and New Bohemia/Czech Village areas.

Since that time, the realization that the cats are in need of help has diminished, along with donations. An account at F&M Bank in Cedar Rapids remains open, with donations going to the vaccination and spay/neuter efforts.

“We have become very close to all of these cats,” Patterson said. “We hope, with our help, they will all continue to live long, peaceful lives.”

Donations may be made to the Flood Cats account at F&M Bank, 4000 First Ave. NE, Cedar Rapids, Iowa 52402. All donations are used for the care of stray cats in vacant buildings in Cedar Rapids.