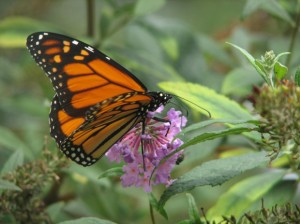 While this monarch finds nectar on a butterfly bush, the monarch life cycle is dependent on milkweed.

UPDATE: Prairiewoods in Hiawatha will offer a similar event, with a focus on the decline of monarchs. Here is that info:

The Plight of the Monarch at Prairiewoods, Monday, May 5, 7–9 p.m. Have you noticed that the population of monarch butterflies is dwindling? Spring is the time to plant milkweed and native flowers, crucial to the survival of monarchs, so it’s a great time to learn more about them. Join professional photographers and filmmakers Cindy and Kirby Pringle at Prairiewoods (120 East Boyson Road in Hiawatha) for a documentary that focuses on the rapid decline in population of the monarch butterfly, largely because of the loss of habitat. This evening will feature a social at 7 p.m., followed by the presentation at 7:30 p.m. Registration is appreciated. A free-will offering will be accepted. For more information or to register, contact Prairiewoods at www.Prairiewoods.org or 319-395-6700.

Original post: Milk”weed” is a bit of a misnomer that would do well by a new name: maybe monarch esprit?

Whatever its name, this plant is essential for the delicate monarch butterflies that migrate thousands of miles each year. As more milkweed is wiped out, the monarchs lose their lifeblood and populations are declining.

This is one issue in which home gardeners can make a difference, simply by allowing milkweed to grow. A free film screening by Iowa City-based Backyard Abundance sheds more light on this topic. The documentary will be shown at 5 p.m. this Sunday, May 4, 2014. Read on for more from Backyard Abundance:

IOWA CITY — The population decline of monarch butterflies has been steep and sudden throughout much of North America. People with landscapes of any size can help revive their numbers.

To raise awareness of the rapidly declining monarch butterfly population and help people understand how to help, Backyard Abundance is hosting a screening of “Plight of the Monarch.” The film will be screened at 5 pm, Sunday, May 4 at the Eastside Recycling Center, 2401 Scott Boulevard SE, Iowa City. After the screening, the filmmakers, Kirby and Cindy Pringle, will lead a discussion about the monarch and will tour the prairie plants surrounding the Eastside Recycling Center. The event is free and open to the public.

“We really noticed a decline in their numbers starting four years ago,” says fine art photographer Kirby Pringle of Tuscola, Ill., located 25 miles south of Champaign-Urbana. “We have friends in Canada and other parts of the United States and they were all saying the same thing — no one was seeing monarchs, certainly not in the numbers they’ve been seen in the past. It’s really alarming.”

The documentary looks at the causes behind the declining population of the monarch, the lifecycle of the butterfly and what people can do to help reverse the trend. The husband-and-wife team will also talk about how they became interested in monarch butterflies and why they decided to make the film, which has been shown on the local PBS affiliate in Charleston, Ill.

The loss of milkweed throughout the Midwest is the major reason behind the population decline of the monarch, according to Kirby.

“We did the filming in 2012, with all the camerawork taking place in Central Illinois. We put the finishing touches on it in early 2013” Kirby says. “The documentary is timelier than ever. The overwintering population of monarch butterflies in Mexico last winter was the smallest on record. In 2012, we saw our first monarch butterflies in Central Illinois on May 2. In 2013, we did not see our first monarch until June 26.”

They will also have copies of their newest book available for purchase, “The Butterfly That Would Not Fly.” In the book, Pearl Barker finds a monarch butterfly that’s afraid of heights. Pearl and her husband, Earl, try to help the butterfly overcome its fear so that it can migrate to Mexico and join millions of other overwintering monarchs. The documentary film was an outgrowth of the work on the book.

“Hopefully things like our documentary film and book will help people realize what’s going on and the steps that we all have to take in order to save monarch butterflies for future generations,” Cindy Pringle says.

Visit www.dogtownartworks.com for more information about the Pringles.