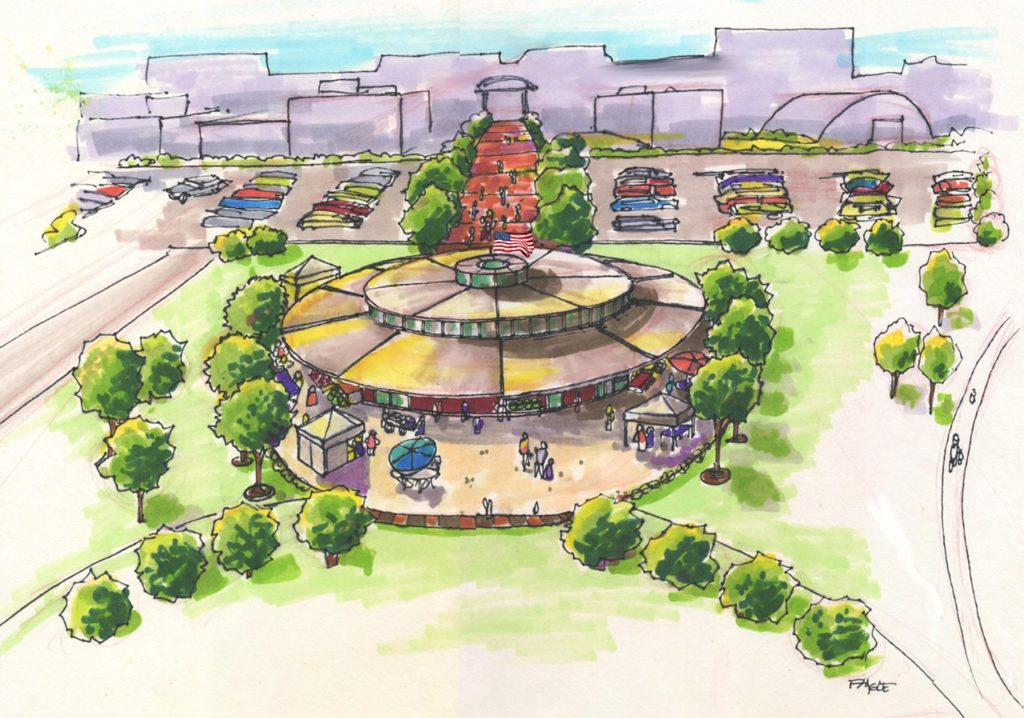 CEDAR RAPIDS – Rebuilding the Riverside Roundhouse won’t happen as soon as supporters might like, but enthusiasm remained high during the first public forum to discuss the project.

More than 30 people gathered Wednesday, March 22, 2017, at Lion Bridge Brewing Company to hear details about the project, which would resurrect the roundhouse in Czech Village. 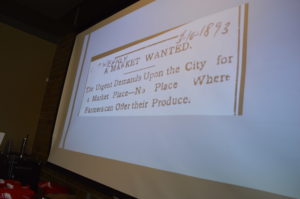 A newspaper ad from 1893 demonstrated the need for a farmers market venue in Cedar Rapids, Iowa. The ad was among a number of slides shown at Wednesday’s public forum. (photo/Cindy Hadish)

Friends of Czech Village, a nonprofit started to support the rebuilding efforts, is working on a capital campaign to raise an estimated $1.5 million.

The roundhouse, which would be enclosed with heating and air conditioning for a year-round venue, opened in 1963 as a site for farmers markets and other events. The building was deconstructed after the 2008 flood and has since been in storage, while the National Czech & Slovak Museum & Library was moved to higher ground where the roundhouse once stood.

Plans call for the circular building to be located in a new site behind 17th Avenue SW, along what had been B Street SW.

Michelle Bell, president of Friends of Czech Village and the owner of White Lion Treasures, 87 16th Ave. SW, said she would have liked to have the roundhouse rebuilt by June 2018, to coincide with the 10th anniversary of the 2008 flood. The city, which owns the land where the structure will be rebuilt, however, isn’t ready for the construction, she said.

Plans now call for a ceremonial groundbreaking in June 2018, with construction to begin in 2019 and a grand opening tentatively scheduled for June 2019.

Supporters said they are excited to see the roundhouse return, particularly for farmers markets and multi-cultural events. The venue, which will be owned by the city, also could be rented for weddings, graduations and other occasions.

Nostalgia is another factor in wanting to see the roundhouse rebuilt, said Elizabeth Grier, who spent her youth alongside her mother, Kim Grier, as a farmers market vendor.

Elizabeth, now 25, was just 6 years old when the family started selling their Golden Rule Apiary honey at the market in 1997. She and her sister, Lauren, 22, learned how to give change and interact with customers.

They also were given the freedom to pick up goodies at Polehna’s Meat Market and Sykora Bakery, nearby in Czech Village, said Kim Grier, of Swisher.

“It was the first time they were allowed on their own,” she said.

After the 2008 flood, the family tried various markets in Cedar Rapids, but settled on the Iowa City Farmers Market as the best place to sell their honey.

Kim Grier knows the enclosed roundhouse would be different, as trucks would not be able to back up to the stalls as they had previously, but both she and her daughter would like to see it return.

“I grew up there,” Elizabeth said. “I’d like to see it come back. I think it will be great.”

Scott Kruger, executive director of the NewBo City Market, just across the Cedar River in New Bohemia, said he is supportive of the rebuilding efforts and doesn’t see the roundhouse as competition.

“Having the roundhouse back only enhances the appeal of this entire district,” he said. “The district as a whole should be thought of as a destination.”

Donations to rebuild the roundhouse are being accepted on the Friends of Czech Village website at: Czechvillagefriends.org 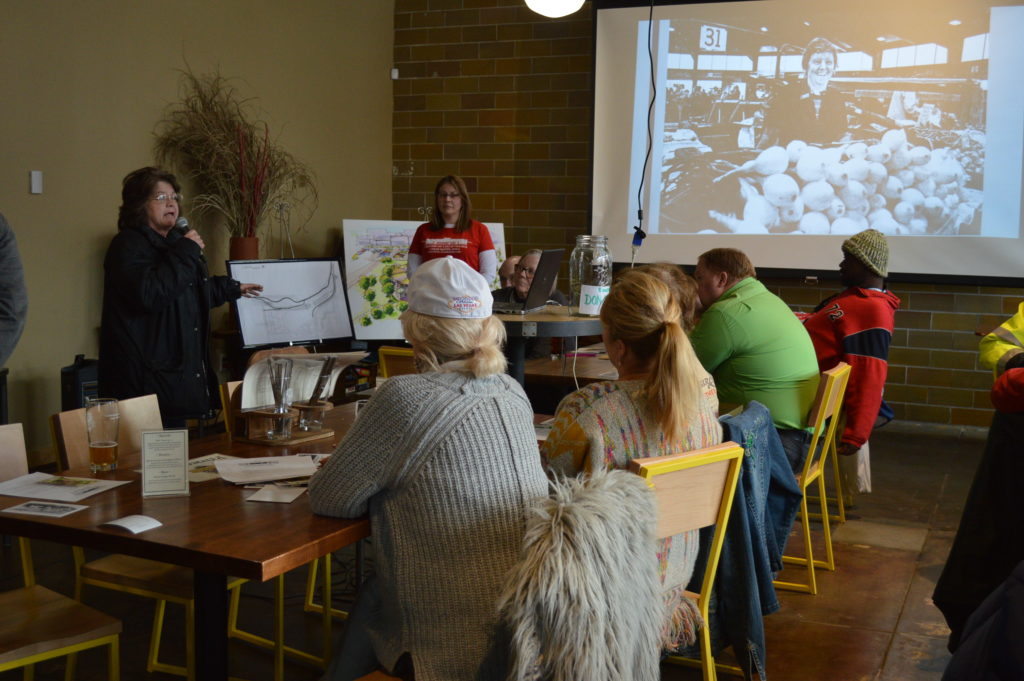 Lou Thompson, owner of the Village Meat Market and Cafe and a board member of Friends of Czech Village, speaks about plans for the Riverside Roundhouse at the public forum on Wednesday, March 22, 2017. (photo/Cindy Hadish)