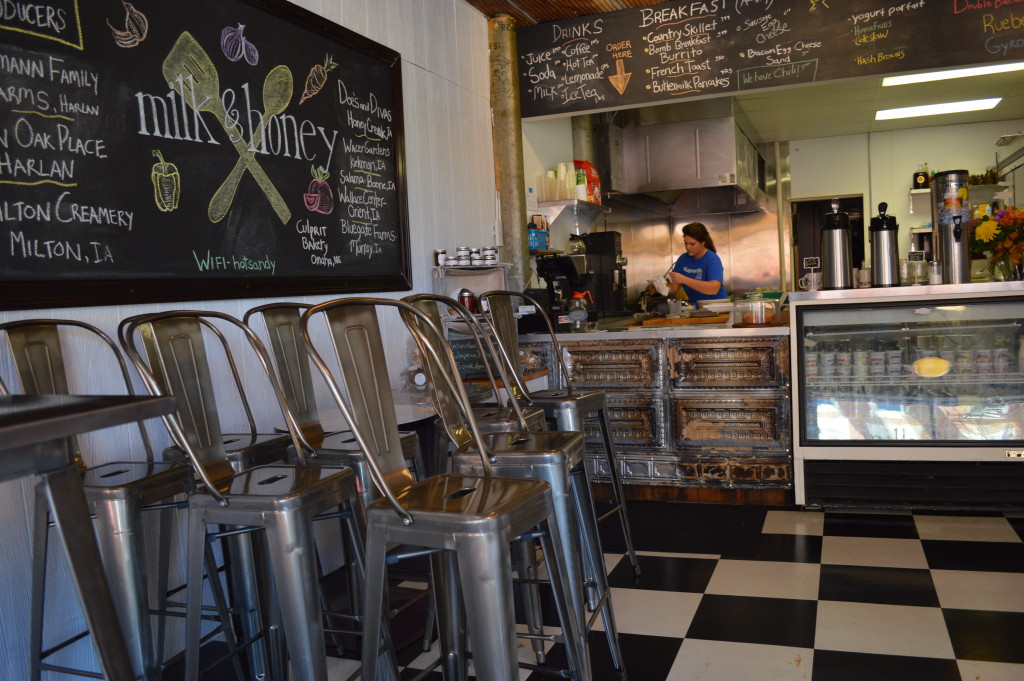 Milk & Honey, a cafe in Harlan, Iowa, has used online ordering and curbside pickup during the coronavirus pandemic. (photo/Cindy Hadish)

Amidst the backdrop of another high death toll reported Tuesday, May 12, 2020, Governor Kim Reynolds announced she had delayed her decision on “reopening” businesses in Iowa.

Reynolds had said Monday that her decision would be announced today, as many of the state’s mitigation measures expire this Friday, May 15, but said during today’s press conference that she and her staff are continuing to look at data and would announce the decision Wednesday.

With an additional 18 deaths reported May 12, so far, 289 Iowans have died of COVID-19, the respiratory illness caused by the coronavirus, and with 539 new cases, Iowa has had 12,912 confirmed cases reported in total. Of the positive cases, 319 were Iowans tested about two weeks ago in Nebraska with ties to a meat processing plant, which were only recently reported to Iowa.

The single-day COVID-19 death toll marks one of the deadliest days in Iowa, second only to the 19 deaths reported on May 5.

Many of those deaths have been connected to long-term care centers, with 32 outbreaks reported statewide. Reynolds has encouraged older Iowans and those with underlying health conditions to stay at home as she “reopens” the state, but has not acknowledged the connection between those nursing home outbreaks to community spread of the highly transmissible virus.

“This is our most vulnerable population,” she said Tuesday, citing testing for nursing home residents and staff among the state’s proactive measures, in response to a reporter’s question.

Ellen Walsh-Rosmann, a farmer and co-owner of Milk & Honey restaurant in Harlan, spoke during the governor’s press conference today about receiving a small business relief grant. She noted that her western Iowa farm-to-table restaurant has not completely reopened, but has used online ordering, curbside pickup and other measures to keep customers and staff safe.

Reynolds noted at the press conference that 627 farmers nationwide had filed for bankruptcy in the past 12 months, including 37 in Iowa.

On Monday, Reynolds announced she would be in a “modified quarantine” with daily testing for COVID-19, doing some work from home and having her temperature taken frequently, after a staff member of Vice President Mike Pence tested positive for COVID-19. 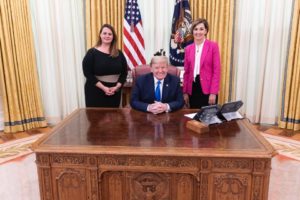 Dr. Caitlin Pedati and Iowa Gov. Kim Reynolds pose May 6, 2020, for a photo next to Donald Trump in this image posted on the governor’s Facebook page. (Official White House photo by Shealah Craighead and D. Myles Culle)

Reynolds said she did not have direct contact with that staff member during a trip to the White House last week with state medical director Dr. Caitlin Pedati, and the aide did not accompany Pence to Iowa on Friday for a meeting with religious leaders and others.

The governor said she had a face mask with her and practiced social distancing during the trip to Washington D.C., although photographs showed otherwise.

Reynolds had already allowed campgrounds and farmers markets to open statewide and lifted restrictions on gatherings for religious services throughout Iowa.

In addition, the governor already partially lifted restrictions on many businesses throughout the state, including in 22 counties where some restrictions remained in place.