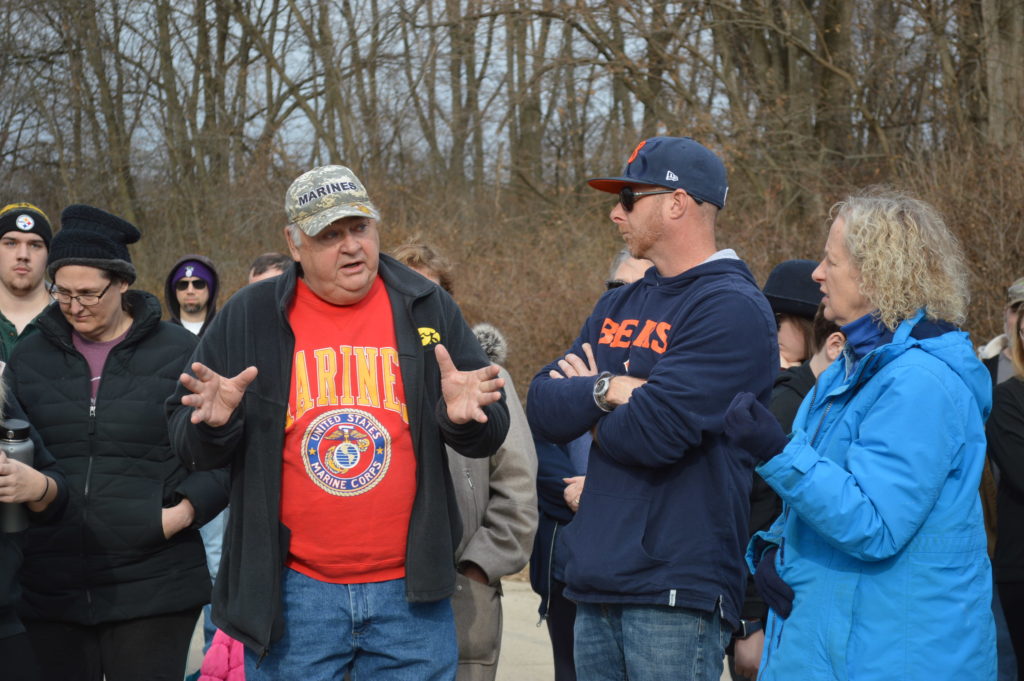 John Schriner (in Marines hat) discusses Cargill’s plan for a railyard near his home on Helen Court SE, in Cedar Rapids, Iowa, during a tour of the site Sunday, Nov. 24, 2019. (photo/Cindy Hadish)

Led by State Sen. Rob Hogg, (D-Cedar Rapids) more than 50 people toured the site south of Otis Avenue, west of Cole Street SE, approved last week by the City Council to be rezoned from suburban residential large lot to general industrial. Two more readings are needed for the rezoning, scheduled for Dec. 3, and possibly Dec. 17, if the final two readings are not combined. 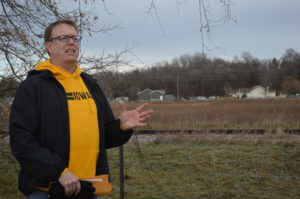 Rob Hogg points out the proximity of Cargill’s proposed railyard next to homes on Helen Court SE, as he stands alongside the trail at Prairie Park Fishery. (photo/Cindy Hadish)

No City Council members attended the walk, which was designed by Hogg primarily for Cedar Rapids residents unfamiliar with the area.

If all goes according to Cargill’s plans, the 12-track, 200-car industrial railyard will be up and running by this time next year in land currently designated a Prairie Pollinator Zone, next to Prairie Park Fishery.

Runners, cyclists and walkers will breathe in pollutants emitted just feet away from the trail that surrounds the popular fishery once the proposed railyard is in place. No buffers are planned between the park and railyard, which will operate 7 a.m. to 7 p.m., 365 days of the year.

Cargill officials have said they may have to rethink the future of their Cedar Rapids corn milling plant on Otis Road SE if the City Council did not approve the railyard.

In addition to approving the first reading of the rezoning, council members on Nov. 19 voted unanimously to amend the city’s future land use map from urban low intensity to urban high intensity.

A cyclist passes the group in Prairie Park Fishery who gathered to learn about Cargill’s plans for a railyard next to the park. (photo/Cindy Hadish)

“They’re selling us down the river,” said John Schriner, whose home on Helen Court SE is just yards from the 28-acre city-owned site where the railyard is proposed to go. “They don’t care about us.”

Hogg, who lives on Otis Road SE, noted that residents in the area, including the Rompot neighborhood — hard-hit by the 2008 flood — don’t have the financial resources to fight Cargill, which has been working with the city on the proposal for about two years.

He cited several reasons why the proposal should not move forward, including the location of the site in a flood plain. Hogg added that Cargill will use chemical herbicides to control weeds, which will drain into the lake at Prairie Park Fishery.

City Staff noted at the last council meeting that homes in the neighborhood will not be protected from flooding by the berm that Cargill promises to build as a buffer.

Hogg has scheduled two more opportunities for people to tour and learn about the site,  at noon Wednesday, Nov. 27, and 1 p.m. Saturday, Nov. 30.

He asked residents to contact the Cedar Rapids City Council before the second reading at noon Tuesday, Dec. 3, and urge them to vote “no” on the rezoning for the Cargill railyard and to explain why.

More: City “held hostage” by Cargill demands. See other photos from the tour, below: 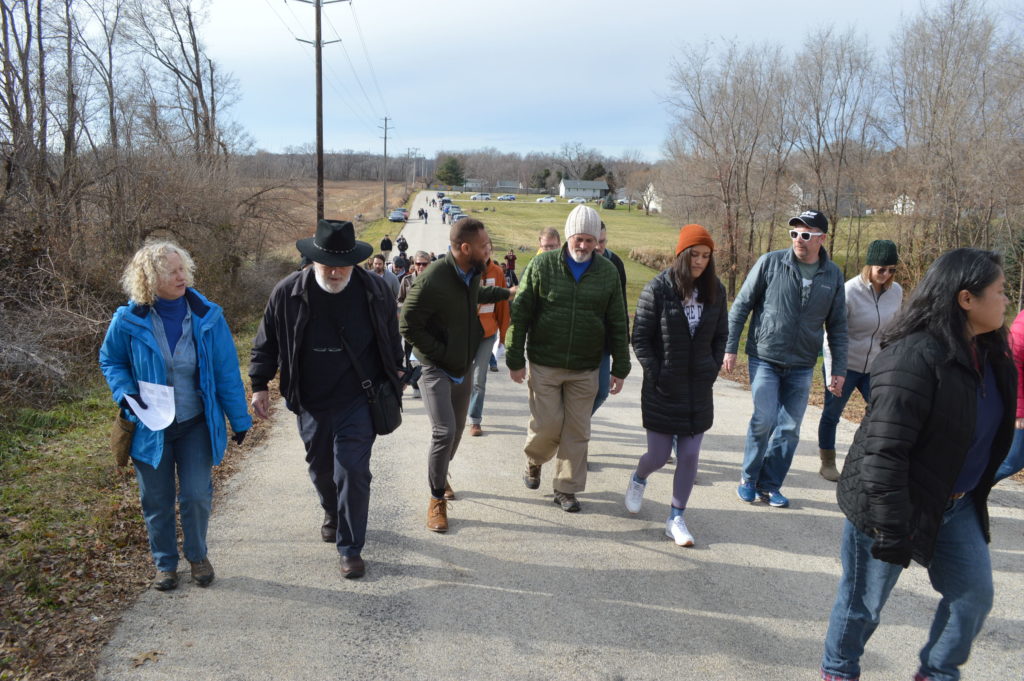 The group walks up Otis Avenue SE at the beginning of the tour. Houses to the right on Helen Court SE will have to face 12 hours of daily noise from the proposed railyard, to the left. (photo/Cindy Hadish) 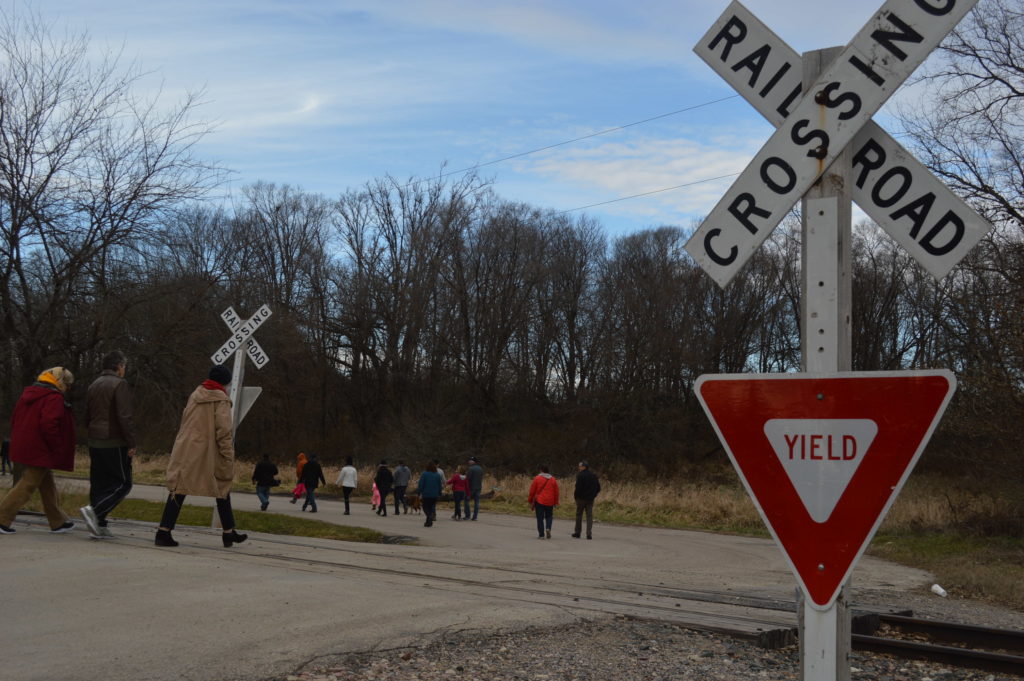 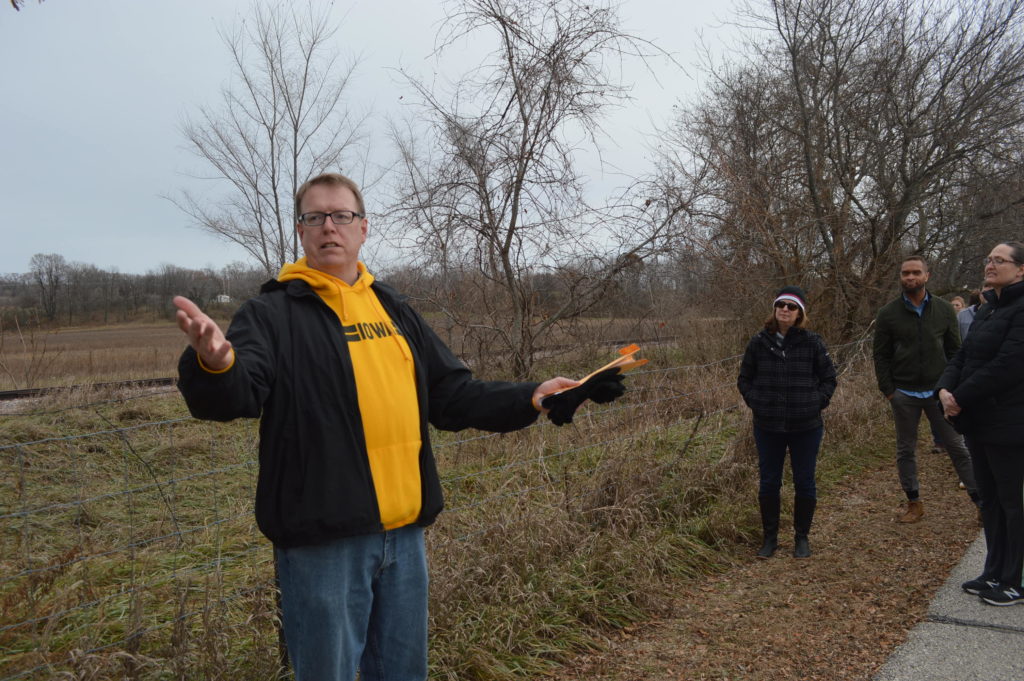 Rob Hogg indicates the close proximity to the trail at Prairie Park Fishery, where people are standing, and Cargill’s planned railyard, just feet away on the other side of the fence. (photo/Cindy Hadish) 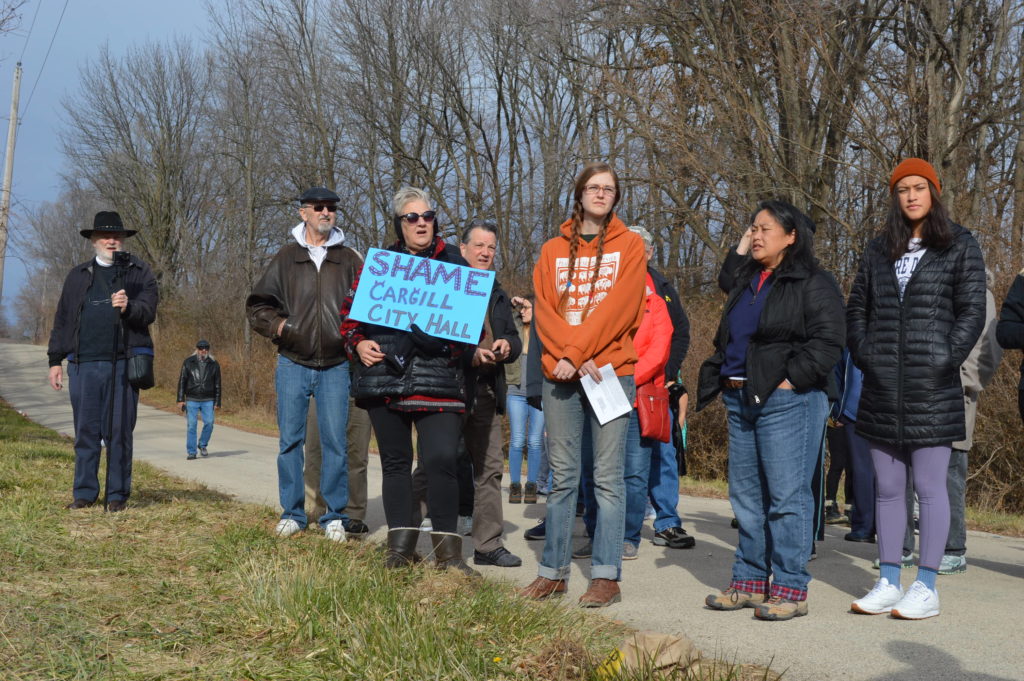 With one resident holding a sign, a group of supporters of the Prairie Park Fishery and Rompot neighborhood gather on Sunday, Nov. 24, 2019, in Cedar Rapids, Iowa. (photo/Cindy Hadish) 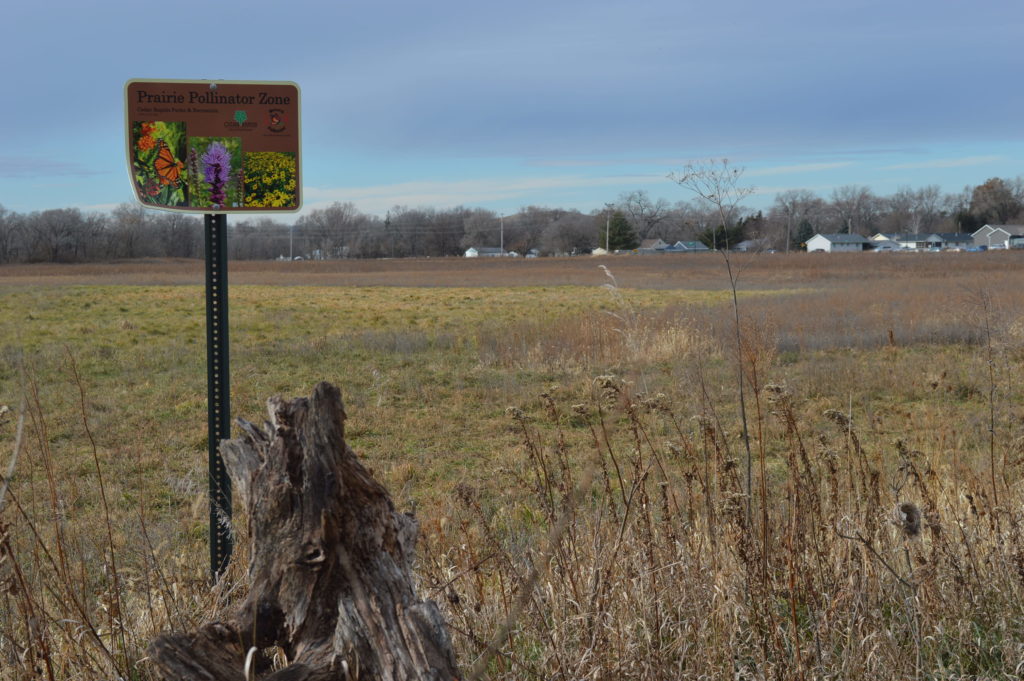 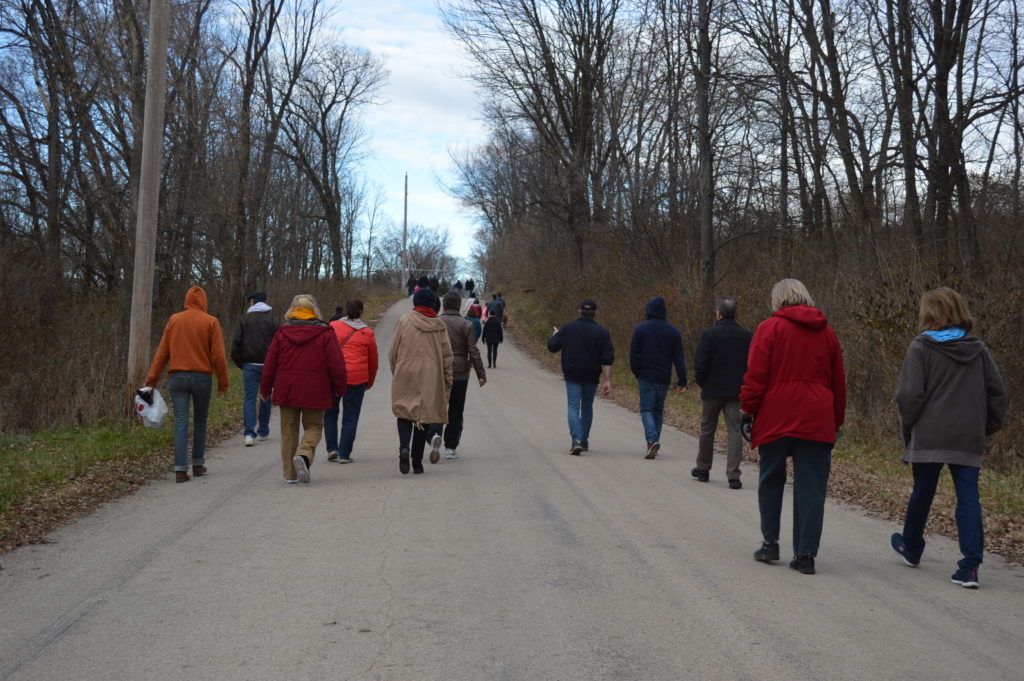