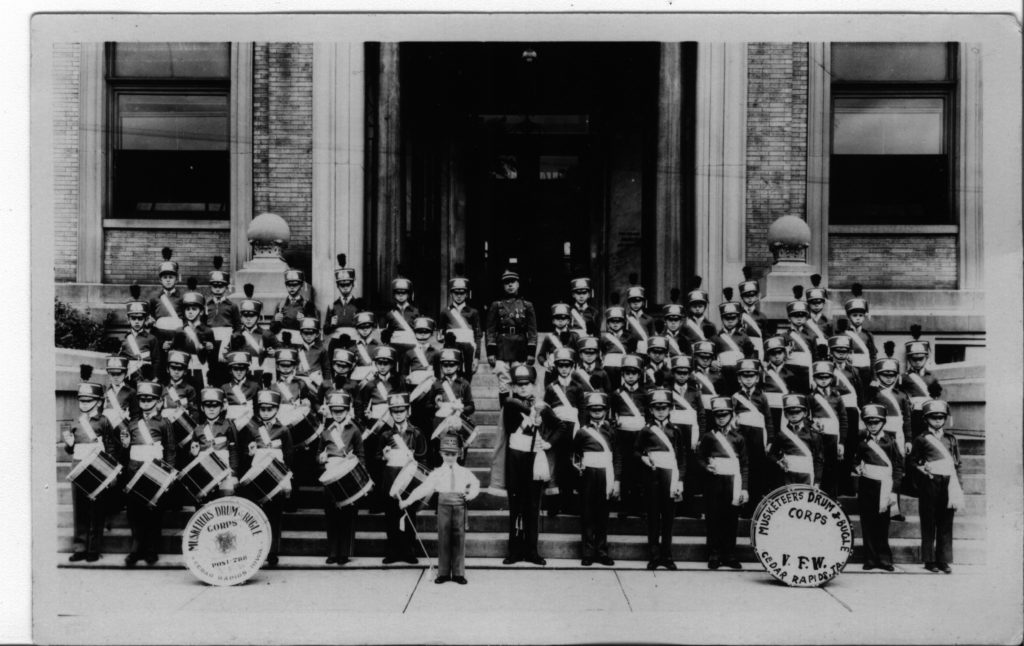 The Musketeers Drum & Bugle Corps, one of several corps that existed in the past in Cedar Rapids, Iowa. (photo/courtesy, Bob Steuber)

In 1934, a bugle was thrust into 10-year-old Bob Steuber’s hands after his mother brought him to try-outs for the Musketeers Drum & Bugle Corps at a second-floor ballroom in downtown Cedar Rapids.

“I couldn’t blow it. I was in tears,” Steuber, now 95, recalled of his first efforts at playing the brass instrument, which had no valves or rotors that would come into use in later years of the activity. “It was just your own lips and wind.”

The Grenadiers were among drum & bugle corps of the past in Cedar Rapids, Iowa. (photo/Cindy Hadish)

Those initial attempts on the bugle didn’t dissuade the determined youngster from sticking with the corps, where he and about 50 other boys, ages 10 to 16, learned music and marching under the tutelage of their director, Jack Fromm.

Steuber is among alumni being interviewed as research ensues on the history of drum & bugle corps in the Cedar Rapids area. Thanks in part to a grant from the Linn County Historic Preservation Commission, memories of people such as Steuber will be preserved in a forthcoming book, along with photos that date back to the early days of the activity.

Organizers are asking former corps members to bring photos and other memorabilia to the upcoming Tournament of Drums, an annual drum & bugle corps competition held this year on Aug. 2 at Linn-Mar Stadium in Marion. The photos, which will be scanned later and returned, should be marked in an envelope with contact information, or high resolution jpegs can be emailed to: CorpsHistory@gmail.com 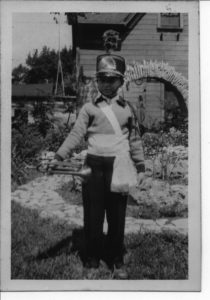 Drum corps activity in Cedar Rapids dates back to 1927, when 12 charter members formed the Cedar Rapids Playground Drum & Bugle Corps, said to be the first of its kind in Iowa. Snare drums and bugles were the primary instruments in the early days, a stark contrast to the wide spectrum of horns and percussion used in modern corps, along with elaborate choreography of color guards.

Steuber still has a black and white photo of himself as a youngster in uniform, his right hand gripping the bugle he went on to master. He remained with the Musketeers about six years, performing at small town celebrations as fundraisers and longer trips for competitions. Steuber remembered traveling to Lisbon, Garrison, Shellsburg and elsewhere to perform.

He also recalled trips to the national VFW convention in Boston, Mass., in 1939, and the Chicago World’s Fair in 1934. Veterans groups, such as the Veterans of Foreign Wars and American Legion, often sponsored color guards and drum & bugle corps during that era, including the Musketeers, sponsored by VFW Post 788.

During the past nine decades, thousands of young men and women from Cedar Rapids, Marion, Mount Vernon and elsewhere have participated in the activity locally. In addition to the Musketeers and Playground Drum & Bugle Corps, Cedar Rapids corps included the Y.M.C.A., the Cadets, Grenadiers and all-girl Cavaliers, later renamed the Moose Girls, with sponsorship by Moose Lodge No. 304. 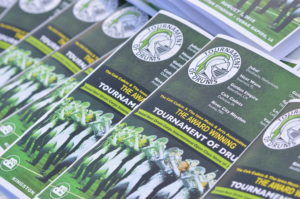 The 2019 Tournament of Drums will be Friday, Aug. 2, at Linn-Mar Stadium in Marion, Iowa. (photo/Cindy Hadish)

In 1965, the Emerald Knights began with 28 charter members. The corps continued in Cedar Rapids until 2002, with a few inactive years and under other names, including Nite Express.

Tournament of Drums, the annual show hosted by the Emerald Knights, also was discontinued, but was revived in 2015 by former members and friends to commemorate the group’s 50th anniversary. With sizable, enthusiastic crowds, the show has subsequently been voted the best Drum Corps International Open Class Tour Event the past three years.

Previously held in Cedar Rapids, the competition, featuring seven drum & bugle corps from across the country, is being moved to Marion this year, due to construction at Kingston Stadium.

The show at Linn-Mar begins at 7 p.m. General admission tickets are available for $13 in advance at West Music, Hills Bank or online at www.TournamentofDrums.com. Admission is $15 at the gate.

Freelance journalist Cindy Hadish is a former member and instructor of the Emerald Knights and author of “Cultural Connections: 150 years of Czech School in Cedar Rapids, Iowa.”

This article was originally published in City Revealed Magazine 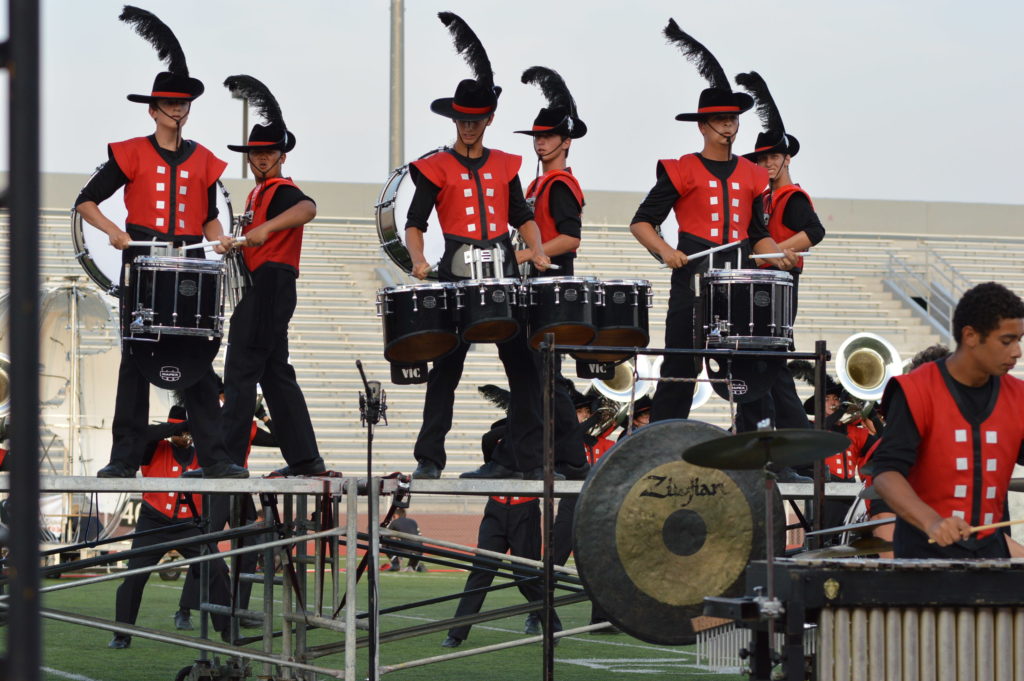 Heat Wave performs during last year’s Tournament of Drums in Cedar Rapids, Iowa. The 2019 show is moving to Linn-Mar Stadium in Marion, due to construction at Kingston. (photo/Cindy Hadish)