Hitchcock in Mount Vernon: “lingering paranoia about all things avian” 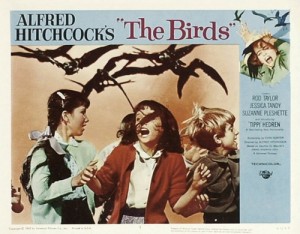 “Farmer Dave” Miller from rural Mount Vernon has been writing some entertaining commentary for the Mount Vernon Farmers Market newsletter. He and his wife, Mickey, are vendors and are among  the many reasons you should check out the Mount Vernon market, if you haven’t already. The markets are 4-6 p.m. Thursdays outside the First Street Community Center, 221 First St. E., Mount Vernon.

Here is Farmer Dave’s take on  “The Birds:”
The penalty for killing a redwing blackbird is $250,000. Yes, those birds that are everywhere in the Iowa countryside are somehow worth a quarter of a million dollars each. And that’s the only thing that keeps me from showing a particular bird on my farm (whom I’ve named Hitchcock) the wrong end of a twelve-gauge Remington Wingmaster.
Before I go any further, and to make this story complete, we must once again travel back in time to the 1970s—when children rode gearless bicycles with banana seats barefoot to the local swimming pool and bought a pack of Lucky Strikes on the way. If you cut your toes off in the bike chain or contracted emphysema before you turned 16, it was your own fault—and parents would just shake their heads on the way to the hospital and say, “I told you so.” But I digress.
My wife, Mickey, who for some reason had naturally blonde hair in the 70s—for real, not just in this flashback—would ride her bicycle from her home in the hamlet of Eldridge to the closest swimming pool, which was seven and a half miles away—one way. (I must point out that she had the luxury of a ten-speed as a child—something everyone in my neighborhood only dreamed about—but then to be fair, we had a city bus that went by every half hour.)
Along Mickey’s route to the pool, there was an area the children referred to as “blackbird alley.” And along blackbird alley, the birds would swoop down at the bicyclists. This phenomenon, along with the Alfred Hitchcock movie, “The Birds,” made my poor wife develop a complex and lingering paranoia about all things avian. The fear is something I’ve never understood. I always found “The Birds” quite silly. I mean, they’re just birds. Put on a football helmet and break out the shotguns. End of problem.
But when Mickey said the blackbirds “swooped down” I didn’t understand. I thought she meant they came within three feet of her head. After meeting Hitchcock (the aforementioned redwing blackbird) this spring, I now realize that particularly aggressive blackbirds will actually graze your scalp. Hitchcock (or Hitch, as he is known to his closest bird friends) believes the strawberry patch to be part of his territory. Enter it, and he skillfully flies down from the electric lines, flies into a blind spot from behind and buzzes your head. And I mean buzzes in the most literal sense—he really beats those wings to create a noisy air disturbance.
Now, even when you see him leave his perch and know what his plan is, and know he is only threatening you, you can’t help find the threat disturbing and you instinctively duck and bob to get out of the way. I have crouched down, waved my arms, spun in circles, cursed loudly, and none if it deters Hitch. I have thrown dirt clods into the air, meant as my own warning shot, and he retreats—but only temporarily.
The kids who work for me have repeatedly suggested a show of deadly force and mounting his dead body on a fence post for his family and friends to see—that’s how tired of Hitch we all are. But Hitch may be trying to protect young fledglings, and I hate the idea of killing a young father who believes he is doing what’s best for his children. Besides, Hitch is protected by the Federal Migratory Bird Treaty Act and can only be killed when he constitutes a threat. A blackbird killed while not being “predacious” or a “health hazard,” as the law states, can result in a fine of up to $250,000 plus jail time. I think that means I have to have a gun in hand when Hitch threatens me—kind of inconvenient. I have no intention of picking strawberries with a sidearm on my hip.
So let this be yet another apology to my lovely wife for every time I made fun of her for being afraid of birds. In the meantime, my plan is to get a red hat of some sort. Red always worked when my male ducks got aggressive. I know Hitch hasn’t got the chutzpah to carry through with an actual attack, so I don’t feel justified in blowing his bird brains out—but I sure would like to.
See you at the market.
Farmer Dave
Farmers MarketsAlfred Hitchcock, birds, David Miller, Farmer Dave, farmers market, Mickey Miller, Mount Vernon, penalty, redwinged blackbird, shoot