How do you squirrel-proof a bird feeder? 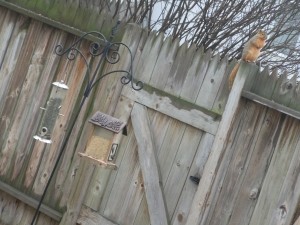 It was only a matter of time before this seemingly innocent squirrel in northeast Cedar Rapids took a leap onto the goods: bird feeders full of seeds. (photo/Cindy Hadish)

My late grandmother – an avid birdwatcher – had a somewhat elaborate system rigged up to deter squirrels from her bird feeders. She could pull a wire strung through her kitchen window that attached a line to the feeder. The pulled wire would shake the bird feeder and scare off the little critters, at least temporarily.

Master gardeners have told me that the only sure squirrel-deterrent is the use of squirrel guards on bird feeders. I’ve seen plastic domes, pipes and other barriers, but wonder what works best.

Squirrels at least provide great entertainment, though they do tend to devour more than their fair share of seeds. My grandmother mainly used black oil sunflower seeds, which attracted red cardinals and other colorful birds to her backyard.