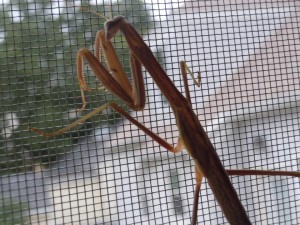 While some insects won’t be affected by Iowa’s recent cold streak, others, like the praying mantis, could see population declines. (photo/Cindy Hadish)

As Midwesterners and people elsewhere search for the silver lining to our recent frigid temperatures, some have pointed to a decline in the pest population, specifically insects.

This report from Minnesota Public Radio notes that the extreme cold is beneficial to the state’s ash trees, as it could kill off a large percentage of emerald ash borer larvae.

The post reads in part: “Winter mortality for emerald ash borer is definitely temperature dependent. The larvae can supercool to a certain point, but they die if they freeze, and there is variability in tolerance among individual insects. A recent study from the Forest Service in Minnesota showed that 5% of the insects die at 0F, 34% at -10F, 79% at -20F and 98% at -30F.”

It goes on to say that there remains the question of what temperatures the insects actually experience, since they spend winter under the bark of trees, and some of them close to the ground, where they may be insulated by the bark itself and possibly by the snow.

So how does that translate in Iowa?

I posed the question to Entomologist Laura Jesse of Iowa State University Extension.

Laura said the general consensus seems to be that it was probably not cold enough long enough to have an appreciable long-term impact on overwintering emerald ash borer populations.

“Insect populations are pretty good at bouncing back from increased mortality events,” she said.

Laura noted that the cold snap won’t eliminate emerald ash borer “and that we will probably never know if it had any effect.”

“Overall one of the most important things to consider with overwintering insects is that wind chill will have no effect on insects and even air temperature may not reflect the temperature where the insects actually are,” she said. “Insects that overwinter in stages that are very exposed tend to be the most noticeably reduced by cold temperatures. Praying mantids and bagworms are a couple that come to mind, both overwinter as eggs out exposed on branches.” 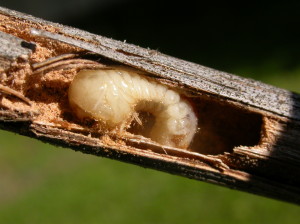 Many insects, such as this beetle larva, can avoid or tolerate extreme cold temperatures by living inside plant tissues or below ground. Here a twig borer grub spends the winter inside grape shoots.
(photo/D. Haviland)

Weather is relative, so what Californians deem cold might seem like a heatwave in the Midwest, but I found this reference from the University of California to be  interesting.

It notes that predicting the influence of cold weather on insects is, in most cases, nearly impossible. “Complicated factors related to pest biology, temperature, food availability, and moisture make predictions about as difficult as asking a weatherman for a prediction of the high and low temperatures for a weekend two months in the future,” said UC Integrated Pest Management Farm Advisor, David Haviland.