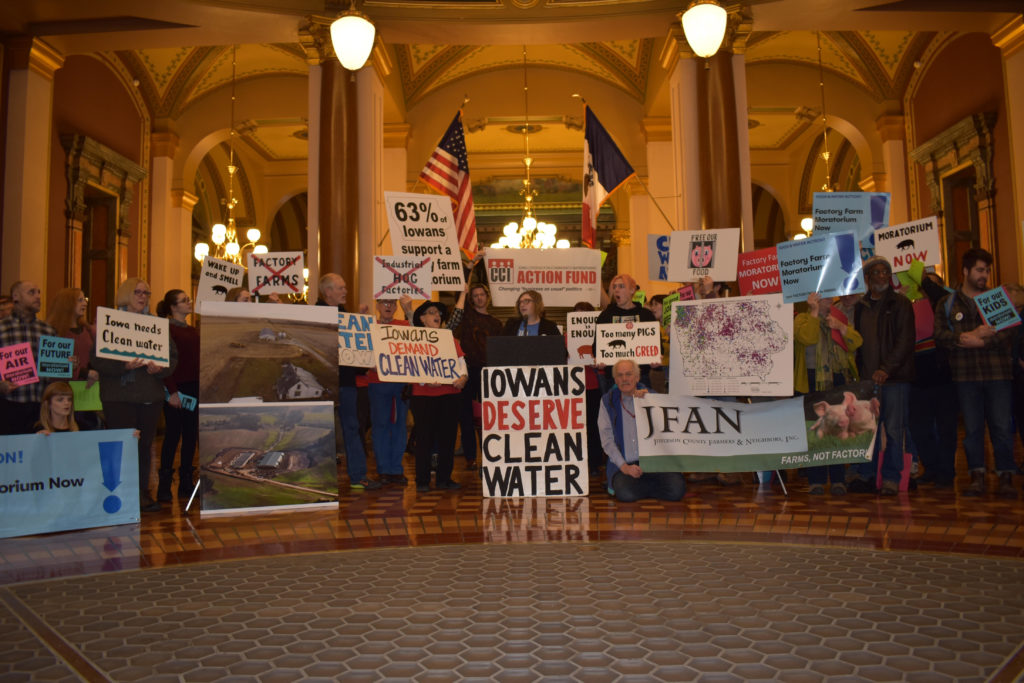 Members of a coalition appeared Thursday, Jan. 23, 2020, at the Iowa State Capitol in Des Moines to advocate for a moratorium on factory farms. (photo/Jackie Filson)

Iowans living in rural communities are virtually helpless when a Concentrated Animal Feeding Operation, also known as a factory farm, sets its sights on nearby properties.

Issues go beyond the stench that neighbors are forced to tolerate, as the sewage produced by these facilities, which pack in animals in small quarters, leads to pollution of Iowa’s waterways, air and environment.

Here is more from that coalition:

Des Moines, IA — A coalition including Food and Water Action (FWA), Iowa Citizens for Community Improvement Action (CCI Action), and Iowa Alliance for Responsible Agriculture (IARA) kicked off a lobby day at the state legislature in support of a moratorium on new and expanding Concentrated Animal Feeding Operations (CAFOs) known as factory farms.

This action comes 11 days before the 2020 Iowa caucuses and places a factory farm moratorium among the top issues voters care about. Seven presidential candidates have acknowledged the negative impacts of factory farming, but all of them must commit to a moratorium or ban. Iowa adds 300 to 600 new factory farms annually.

Diane Rosenberg from IARA quantified what these new additions mean for Iowans. She said, “We are here today because Iowa has a factory farm crisis: 25 million hogs, 55 million chickens and other livestock crammed into 13,000 factory farms. Generating the same amount of sewage as 134 million people that is spread – without treatment – on fields across the state. It’s no wonder we have a water quality crisis with a record number 767 polluted waterways.”

Kim Stephens, impacted resident living next to three 5,000-head factory farms and Iowa CCI Action member said, “I’m a mom to three young boys, and all I want is to protect the air and water around them and their peers so that when they grow up they choose to stay here. I want them to grow up healthy. I want them and their kids to be able to play carefree in the many waterways in this state. Iowa is beautiful, with a variety of landscapes, I want to keep it that way.”

Factory farms are large contributors to antibiotic resistance, which causes 35,000 deaths per year. In communities close to factory farms, children have an increased risk of developing respiratory diseases, like asthma. To protect themselves and shelter against the smell, many families living near factory farms avoid going outside, preventing them from enjoying their neighbors and Iowa’s natural resources.

Tatiana Schaapherder, a youth climate activist, spoke of the urgency of establishing a moratorium. She said, “You, the adults, open your eyes, become the role models that we as the children have had to take on…Show us, your children that you see us, that you care. Give us that future that we deserve, the future that we are fighting for.”

Increasing support for a moratorium has come from everywhere but the state legislature, so it’s time for our elected officials to finally act. On the local level, one in four Iowa counties has passed local resolutions to stop the expansion of factory farms. David Osterberg, from the Iowa Policy Project said, “Iowans on both sides of the aisle clearly care about this uncontrolled degradation of our rural environment. A poll from the Johns Hopkins Center for a Livable Future finds that a majority of registered Iowa voters support a moratorium on factory farming.”

Emma Schmit, an organizer for FWA, said, “Many legislators have already taken bold action against factory farms by calling for a moratorium on new and expanded operations. But we need more of our leaders to step up. This legislation must not stall in committee. We’ve seen that for the past two years and, frankly, I’m damn well tired of it. How much do we have to sacrifice before something is done? How many waterways have to be polluted? How many farmers have to be shoved out by multi-billion dollar corporations? Enough is enough! ”

Chris Petersen, who sits on the Board of Directors of the Iowa Farmer’s Union and is a member of IARA said, “As a rural resident and an independent farmer I see the devastating impacts of a runaway building boom of factory farms not only on independent family farms (94% of independent pig farmers are gone), but also on the environment. We’re talking about water quality, human health, rural neighborhoods, and even rural social structure.”

The independent family farm was once the heart of rural Iowa. Rural communities with more small and medium-sized farms have higher incomes, lower unemployment, and lower income inequality– in short, more shared prosperity– than communities with factory farms. Profits from these independent family-owned farms are put back into the community and pushed back into locally-owned stores that kick-start the local economies.

Iowa Alliance for Responsible Agriculture (IARA) is a diverse coalition of community, state, and national organizations who are concerned about the harmful impacts of factory farms and are each working to promote traditional and ethical agriculture in Iowa. www.cleaniowanow.org

Food & Water Watch champions healthy food and clean water for all. We stand up to corporations that put profits before people, and advocate for a democracy that improves people’s lives and protects our environment at www.foodandwaterwatch.org