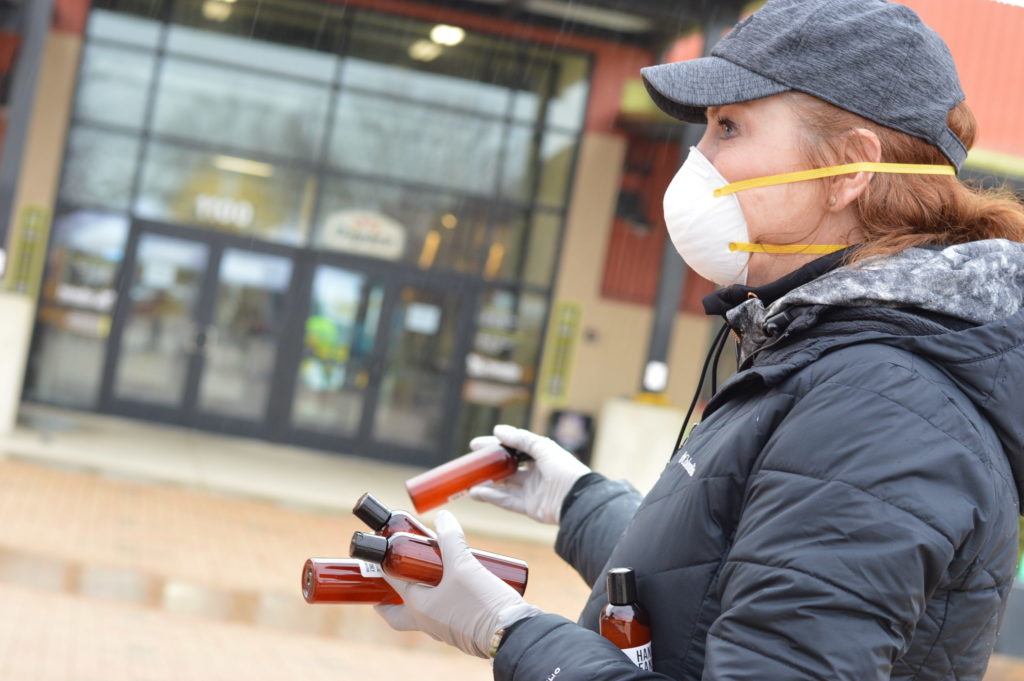 CEDAR RAPIDS — Steve Shriver had mixed feelings as he and other volunteers distributed hundreds of bottles of free hand cleanser March 18, in a steady rain.

Recipients at the drive-through distribution were overwhelmingly grateful, but Shriver, founder of organic lip balm and natural body care products company, Eco Lips, saw the other side, too.

“It’s also sad that this is the demand and the shortage,” he said, in between handing out the 4-ounce bottles through car windows in a long line winding outside NewBo City Market. “It shows you how critical this is to people.” 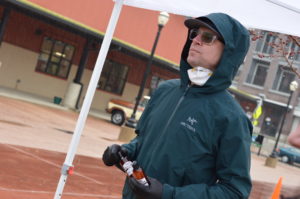 Shriver said he’s been contacted by a number of organizations, and even health care facilities in other states, requesting the product, made with 65 percent alcohol. Hand sanitizer is among the products in short supply in the face of the coronavirus pandemic.

Dr. Ryan Sundermann, UnityPoint Health – St. Luke’s Hospital Emergency Department’s medical director, a partner in Soko Outfitters with Shriver, mentioned the shortage during a business meeting and Shriver quickly took up the cause.

One thousand bottles were produced, with 600 distributed on a first-come, first-served basis Wednesday — one per vehicle — and others promised to organizations. 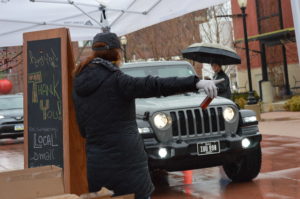 “Steve Shriver can pull a rabbit out of his hat,” said Sundermann, who also handed out the bottles to grateful recipients, some of whom insisted on donating cash in return. “It’s pretty amazing.”

Shriver hopes to offer another giveaway, as he coordinates with health care agencies and tries to ramp up production of the cleanser, also made with water, xanthan gum and lavender oil.

More alcohol from other distilleries could help toward those efforts, he noted, comparing the pandemic to World War II when automotive manufacturers switched production to military tanks to meet demand.

While many would gladly pay for the hand cleanser, Shriver said that didn’t cross his mind.

“I’m probably the biggest capitalist,” he said. “but I’m also socially responsible. It makes no sense to take advantage of the situation to profit off of it.”

That warmed the heart of Kimberly Etter of Marion, who was first in line shortly after 9 a.m. outside the market, 1100 Third St. SE, nearly an hour before the giveaway began.

Etter, who has two teen-agers at home, said she had looked for hand sanitizer at Walmart and Dollar Tree stores, to no avail.

“I think that’s awesome,” she said of the volunteer efforts in the midst of the pandemic. “At least someone’s trying to help.” 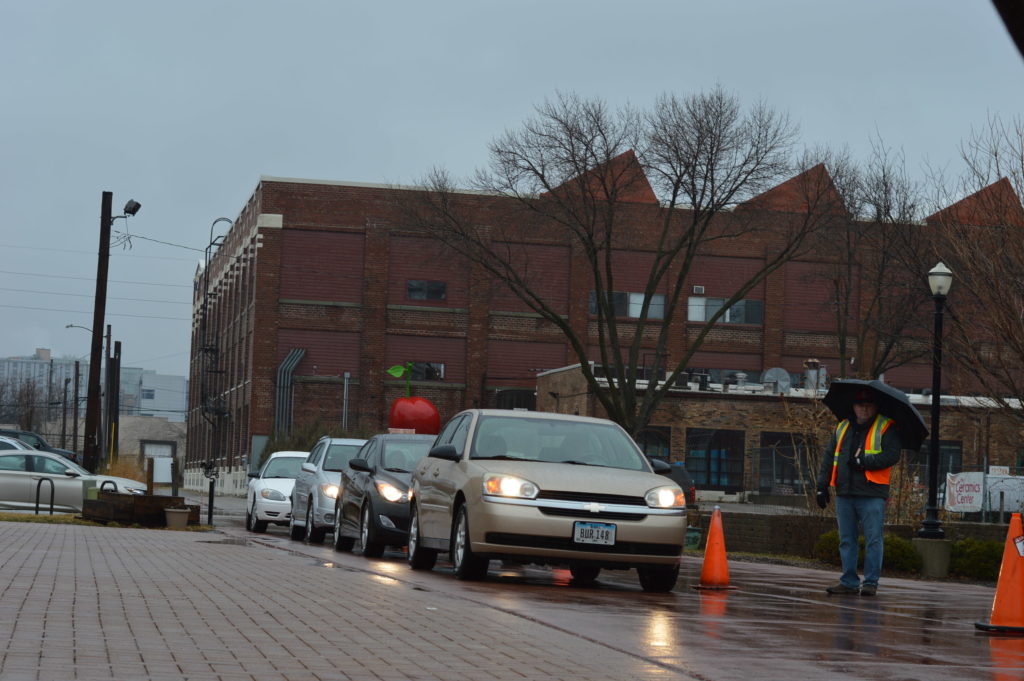 Vehicles line up for the drive-through distribution of free hand cleanser outside of NewBo City Market. (photo/Cindy Hadish) 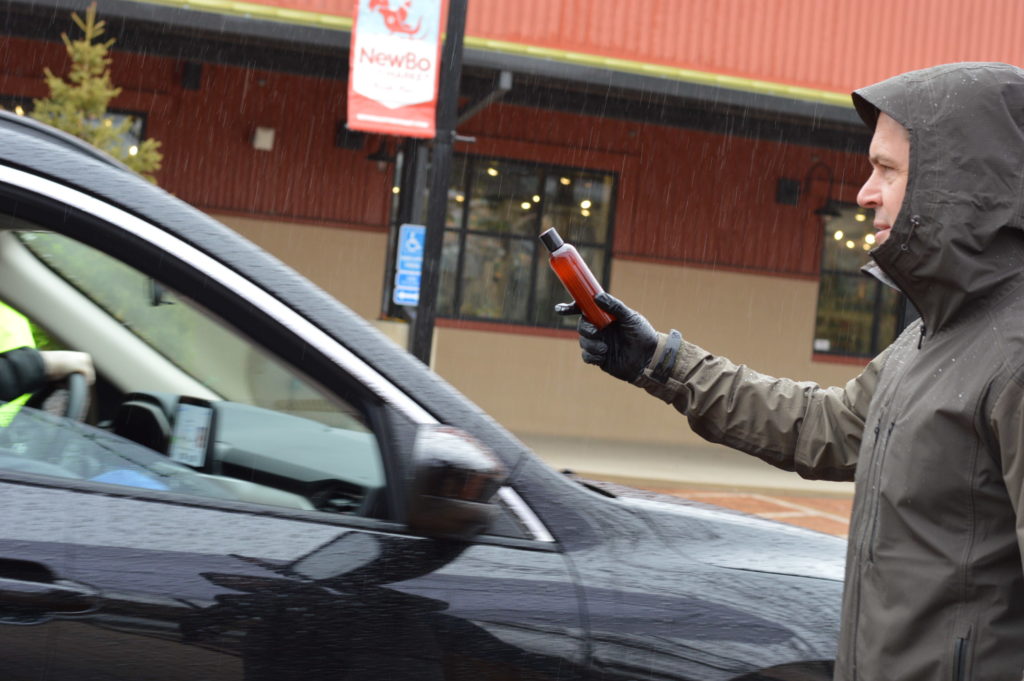 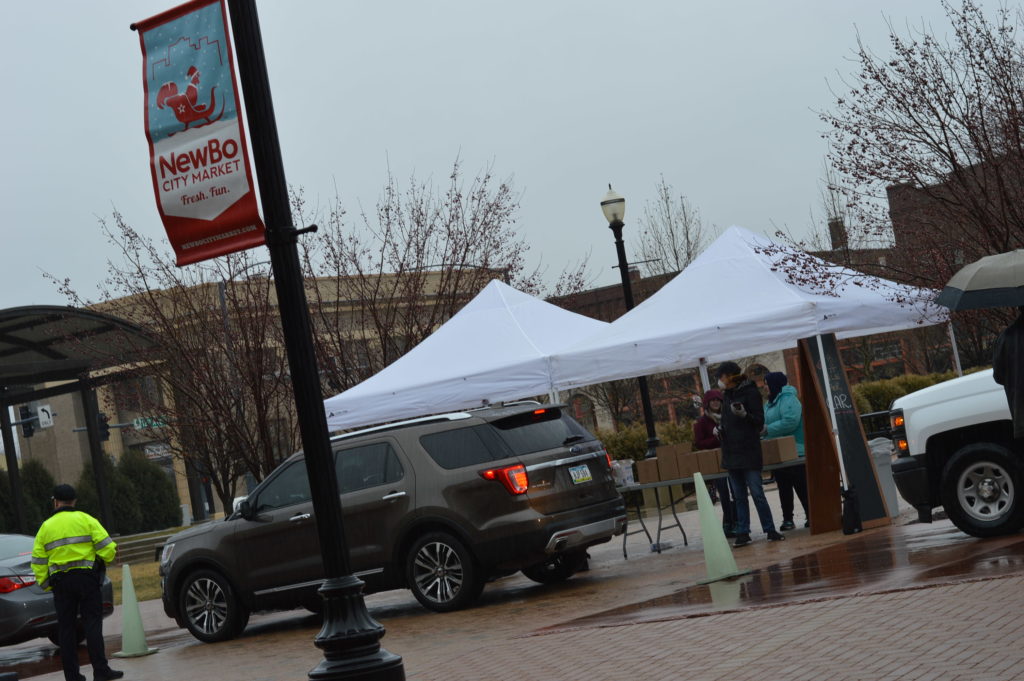 Tents were set up outside NewBo City Market to protect against Wednesday’s rain. (photo/Cindy Hadish) 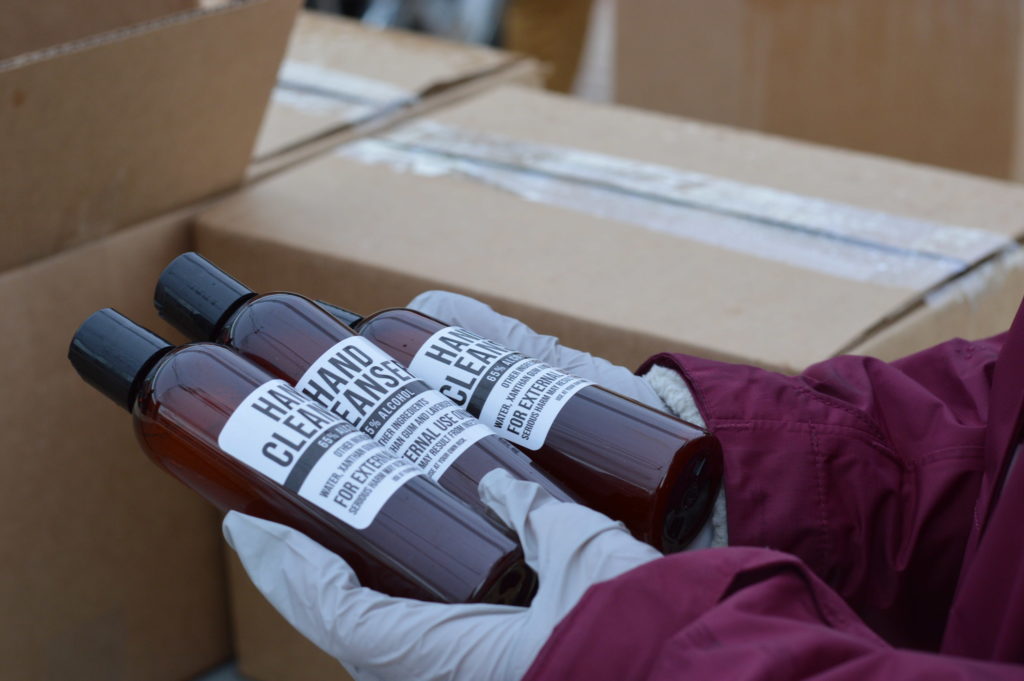 A volunteer holds bottles of the hand cleanser produced in response to the shortage of hand sanitizer. (photo/Cindy Hadish) 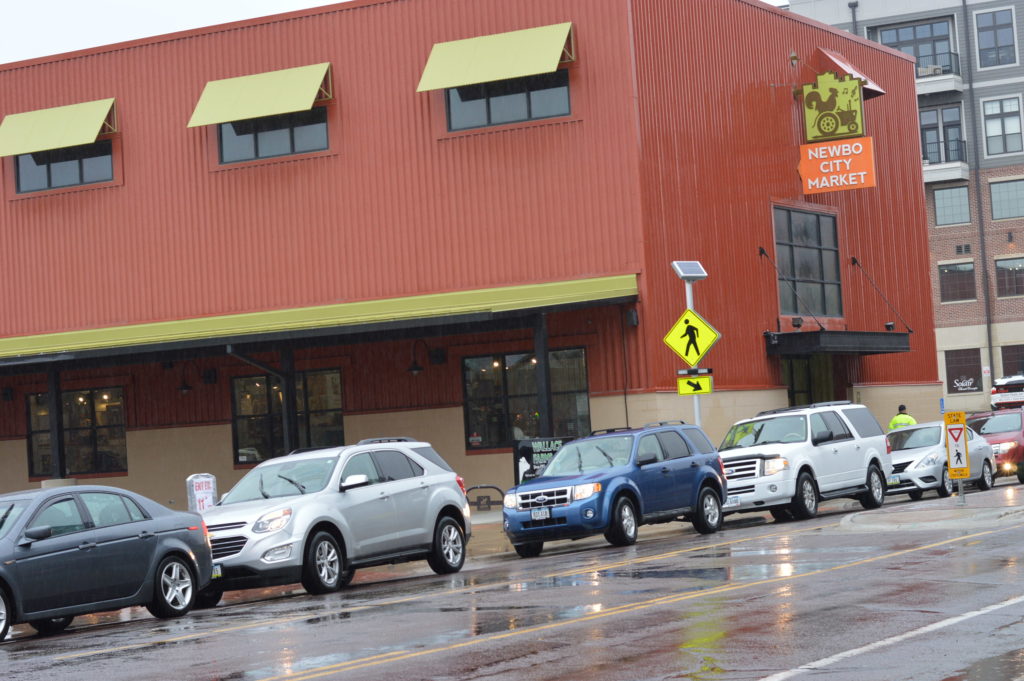 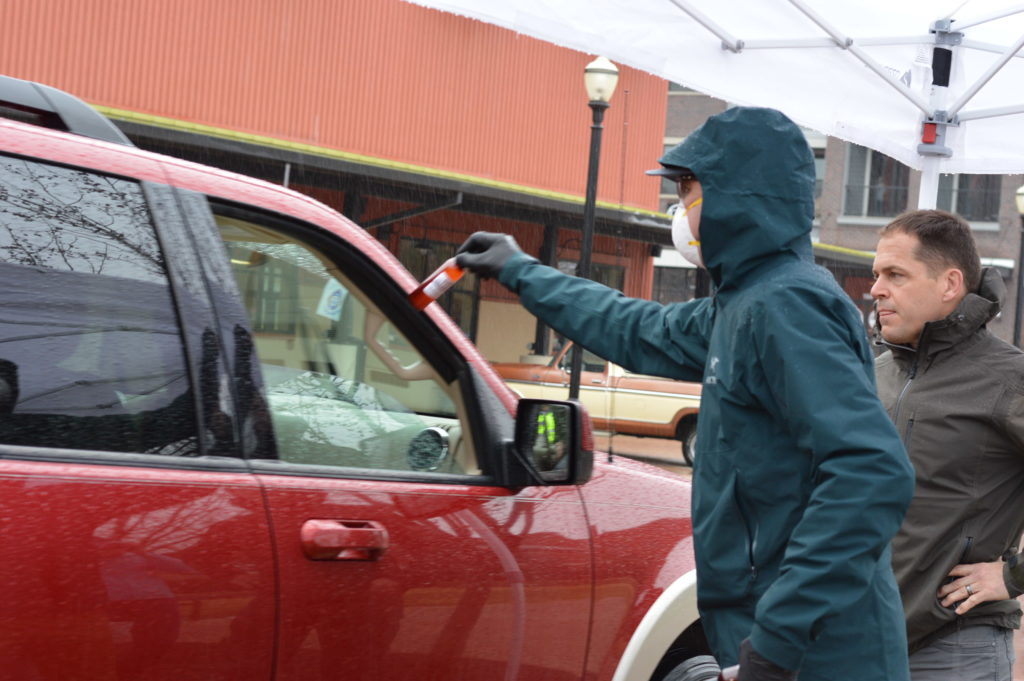 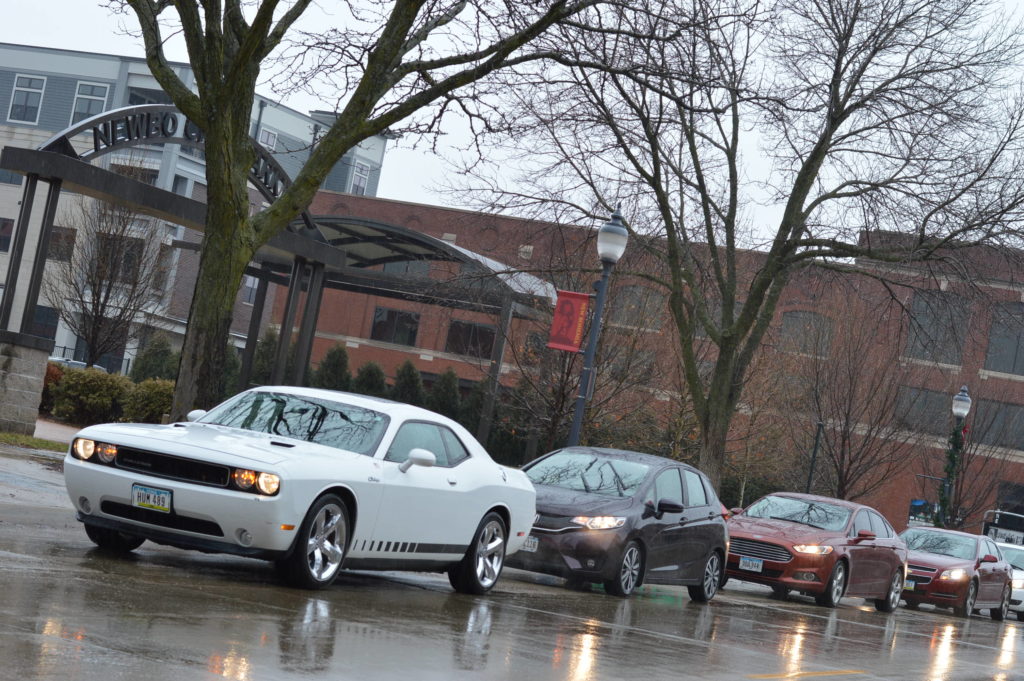 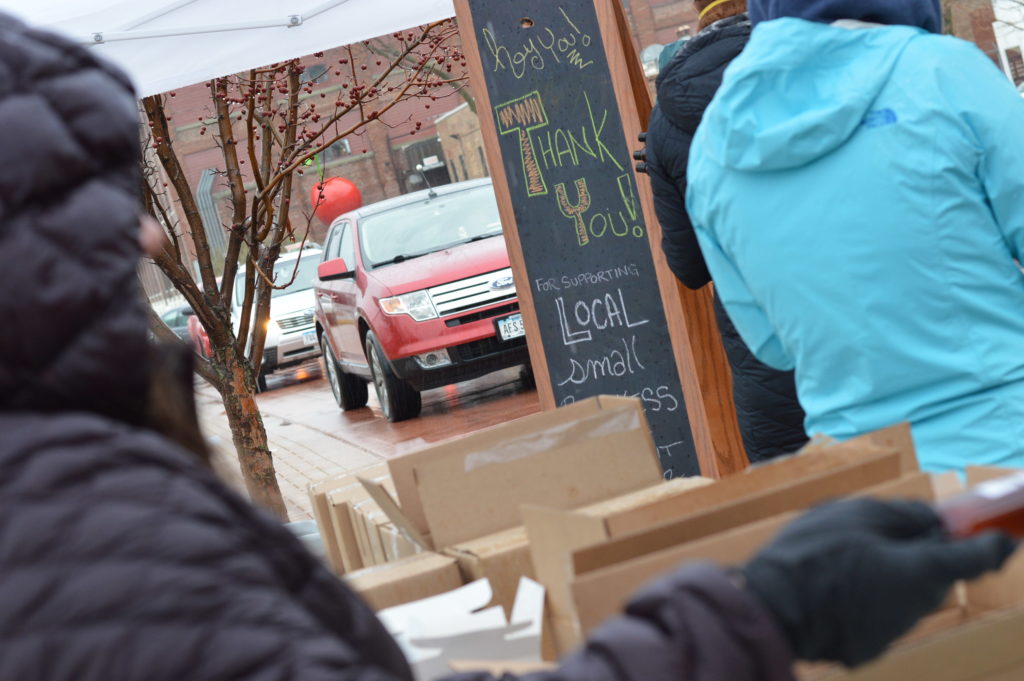 A sign thanks supporters of small businesses at the drive-through distribution of hand cleanser. (photo/Cindy Hadish)