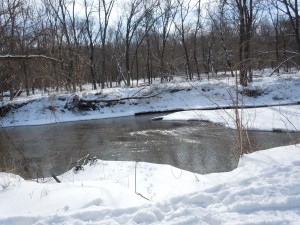 Tranquil water flows through Indian Creek in Cedar Rapids, Iowa, in February 2013. Ice jams, melting snow and rain have led to flooding this week in some areas of Iowa. (photo/Cindy Hadish)

Those of you with flooded basements already realize the havoc that Mother Nature can wreak at this time of year. The Iowa Department of Natural Resources passed along this information today – Thursday, March 14, 2013 – about other types of flooding happening in Cedar Rapids and elsewhere in Iowa:

CEDAR RAPIDS — Localized flooding is occurring in the city of Cedar Rapids about one-third of a mile upstream from where the Interstate 380 bridge crosses the river.

The flooding is caused by an ice jam that has built up in the river and has closed some local roads. The city has dropped the water levels at the 5-in-1 dam below the ice jam in an attempt to increase flows and reduce the upstream flooding depths.

In other areas, Iowans should be alert for localized ice jams as the weather warms and river ice begins to break up. Thick layers of ice can break into chunks, float downstream and stack up against bridges, culverts, woody debris or sharp bends in the river. There are no effective man-made solutions to ice jams. The jams can form and break up in a few hours or last several days.

There is little danger as long as the water continues to flow. If the water is blocked, it can rise very quickly and the height of the flood cannot be anticipated. Unlike other flood events, floods caused by ice jams can be unpredictable and localized. Ice jams can occur on a sunny day when people least expect flooding.

People who live or work in low-lying areas near streams should be aware of possible obstructions downstream—such as a low-lying bridge or a tree jammed against a bridge. Heavy rainfall and warm temperatures can cause ice to break up, move and jam.

Watch the river, too, because flooding from ice jams tends to be so localized that it may not appear on radar screens. You may be the first to see there’s a problem.

It pays to be prepared with an evacuation plan in this situation. If an ice jam and flooding occur, act quickly to move yourself, your family and your valuables to safety. Then notify the police or sheriff’s office to close roads or help others evacuate.

More information from the DNR:

Recent rainfall and melting snow has caused local flooding in many Iowa rivers.

While most of the flooding affects agricultural land, residents in low areas along rivers should be aware of local river conditions. Travelers who see water running across a road should turn around and take another route. Floodwaters can be unpredictable and it takes only a few inches of water to cause a vehicle to float.

As of noon Thursday, the National Weather Service had issued flood warnings for the following areas:

Eight of the 14 Presidential Disaster Declarations since 2007 in Iowa were for flooding. Major floods often occur during late spring and summer, although heavy rains and flash floods can occur at any time. Despite that risk, only about 18 percent of the more than 53,000 homes, businesses and other structures in Iowa’s high-risk floodplain areas are covered by flood insurance.

Now is the time to buy flood insurance, because there is a 30-day waiting period before policies are effective and most home insurance policies do not cover flood damage.

To find out more about federally-backed flood insurance, visit www.floodsmart.gov.