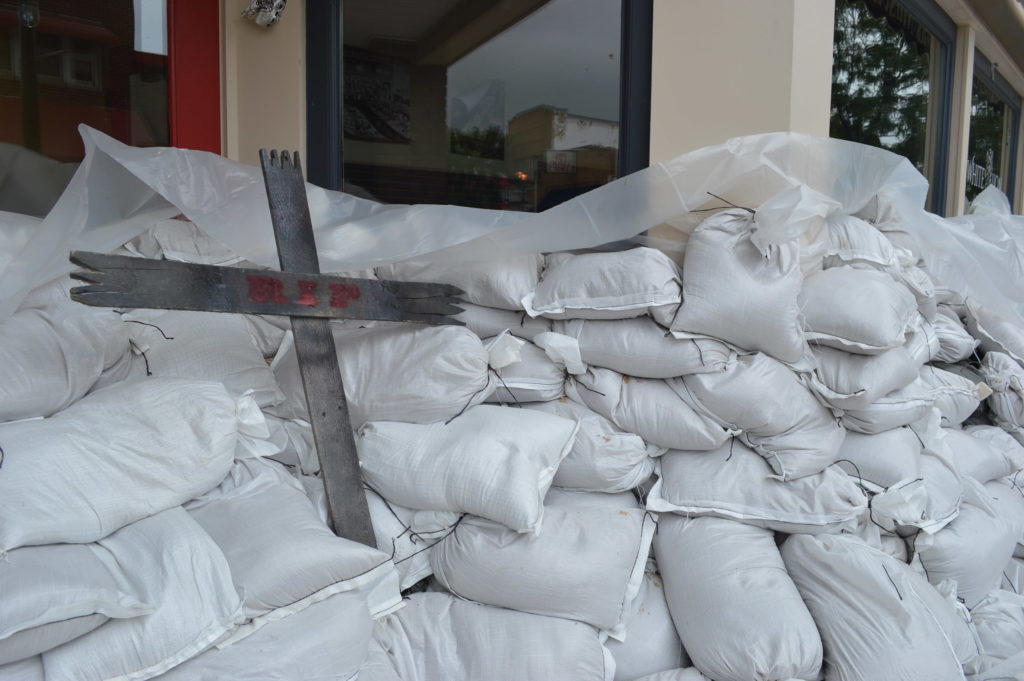 A cross inscribed with “RIP” sits on sandbags outside the historic Kosek Building in Czech Village, ahead of the flood on Sunday, Sept. 25, 2016. (photo/Cindy Hadish)

CEDAR RAPIDS – Even as they moved items to safety and sandbagged their buildings, some Czech Village business owners questioned whether or not they would return, as they prepared for what could be the second worst flood in the city’s history.

As of Sunday, Sept. 25, the National Weather Service predicted that the Cedar River would crest in Cedar Rapids on Tuesday at 23 feet, surpassing records of 20 feet set in 1851 and 1929, and second only to the 31.12 foot crest set in 2008, when Czech Village, New Bohemia and other core areas of Cedar Rapids were inundated by floodwaters, taking months and even years to recover. 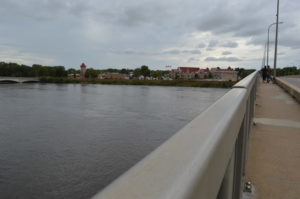 The Cedar River rises on Sunday, Sept. 25, 2016, in Cedar Rapids, Iowa. The river is expected to crest Tuesday at 23 feet. (photo/Cindy Hadish)

“A lot of people are not coming back,” said Michelle Bell, co-owner of White Lion Treasures, 87 16th Ave. SW. With help from many volunteers, including union workers, Bell moved 2,400-square-feet of vintage collectibles, antiques and handcrafted goods from her store beginning Thursday.

This Sunday, she was working to help secure the Artisan’s Sanctuary, 45 16th Ave. SW, before a mandatory evacuation order took effect.

Volunteers from Coe College and Jefferson High School helped sandbag the building, as well. Jim Jacobmeyer, a founder of the Artisan’s Sanctuary, questioned whether or not the nonprofit group would be able to return to Czech Village.

A full list of events is scheduled for the coming weeks and months, he noted, including an Oct. 15 performance by The Cynz, which has now been moved to the Campbell Steele Gallery in Marion.

Jacobmeyer said even if the building does not get flooded, the stage at the Artisan’s Sanctuary would have to be rebuilt, the sound system put back together and other work done to reopen the site, which serves as a gathering space for the community, hosting art classes, live music, poetry and more. 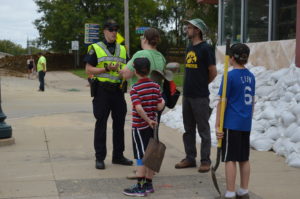 Thousands of Cedar Rapids homes and businesses were ordered to evacuate by 8 p.m. Sunday, as volunteer sandbagging efforts continued throughout the day outside of NewBo City Market, 1100 Third St. SE, and other sites in the city. Cedar Rapids schools cancelled classes for Monday through Wednesday and even Sunday, traffic was congested getting to Interstate 380, one of few routes to cross the Cedar River in Cedar Rapids

Megg Fisher, her husband, Matt, and their two sons, ages 10 and 7, drove from Iowa City to see where they might be able to help. Carrying shovels, the family said they first came to Czech Village because they knew it was in a low-lying area.

An earthen berm being constructed along the Cedar River should help protect Czech Village to 26 feet, they were told, as they picked up their shovels to go elsewhere to one of the sandbagging sites.

Some business owners opted against sandbagging. 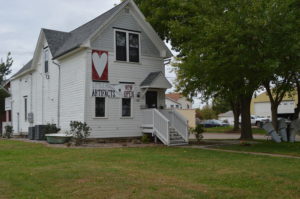 Little House Artifacts in New Bohemia was designed to withstand flooding while being rebuilt after the 2008 flood in Cedar Rapids. (photo/Cindy Hadish)

Beth DeBoom, owner of Little House Artifacts, 1301 Third St. SE, said when the house was rebuilt after the 2008 flood, it was designed to withstand flooding, with a higher elevation and flood vents, to allow water to flow through.

DeBoom and her husband also are part owners of the former White Elephant building, which was moved earlier this year to avoid demolition just up Third Street.

The building still hasn’t been set on a new foundation, and DeBoom worried what the floodwaters might do to it in its temporary site on Second Street SE.

“I won’t consider it safe until it’s over,” she said of the impending flood. “That would be a heart-breaking loss in all of this.” 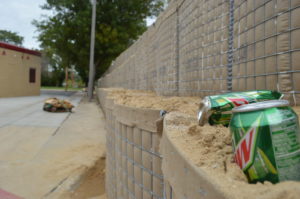 Like DeBoom, business owner Jon Jelinek planned to let the water flow through some of his buildings in New Bohemia, including the popular Parlor City Pub & Eatery, 1125 Third St. SE, which had been cleared of most furniture and vintage decorations to prepare for the flood.

HESCO barriers erected and filled with sand at the edge of Third Street SE along 16th Avenue should protect the area, Jelinek added. The barriers are said to protect the city from up to 26 feet of water.

“I don’t think we’ll have any problems,” he said, noting that buildings with extensive sandbagging could have a longer time to reopen to undo that work. “We’ll just do a good day of cleaning and get it back up.” 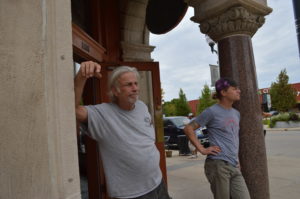 Jessica Propst decided to permanently leave the home she had been renting since 2010 near Czech Village.

As Propst and her children prepared to move in with her mother at a mobile home court until they could find another place to live, she recalled a family walking by with children carrying backpacks, who appeared to be homeless.

“Not everyone’s going to be lucky,” she said, holding back tears.

Propst cited numerous people, including strangers, who stopped by to help her family evacuate. 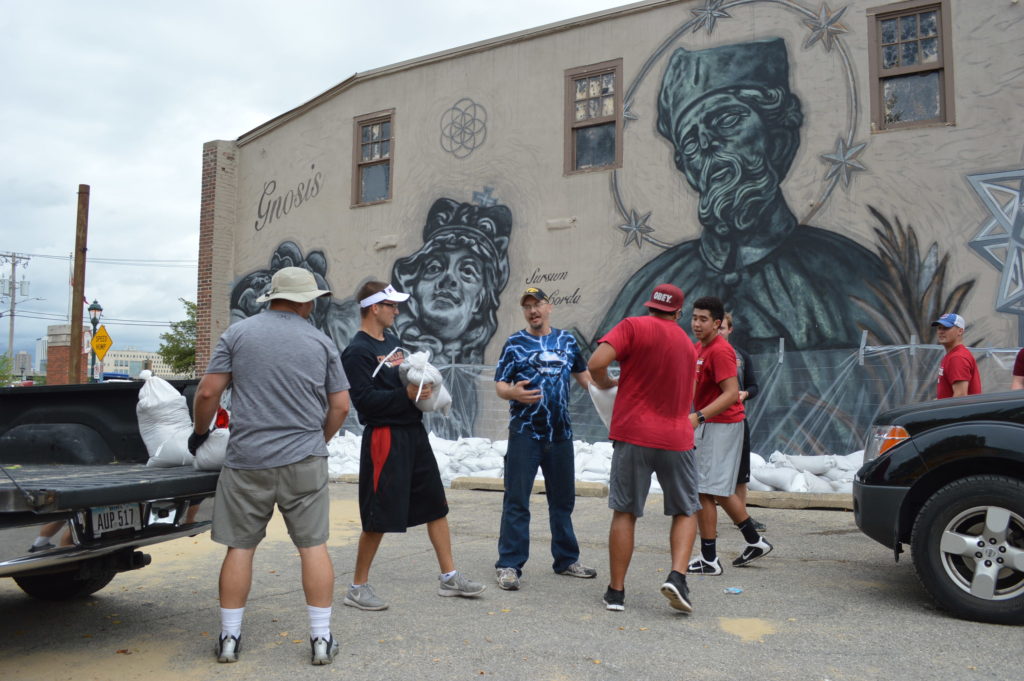 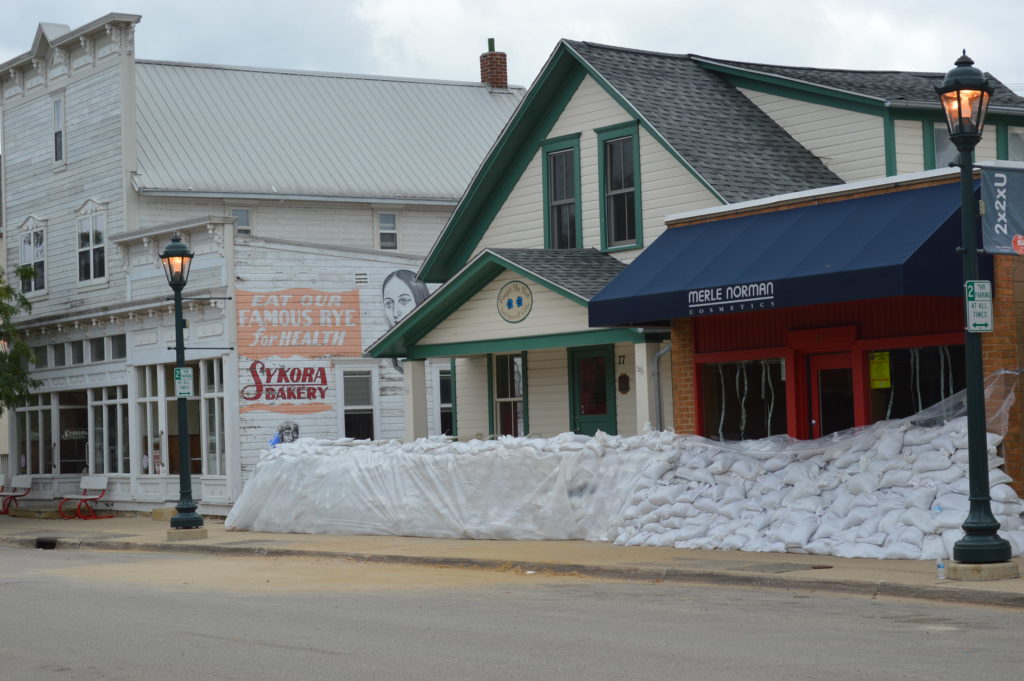 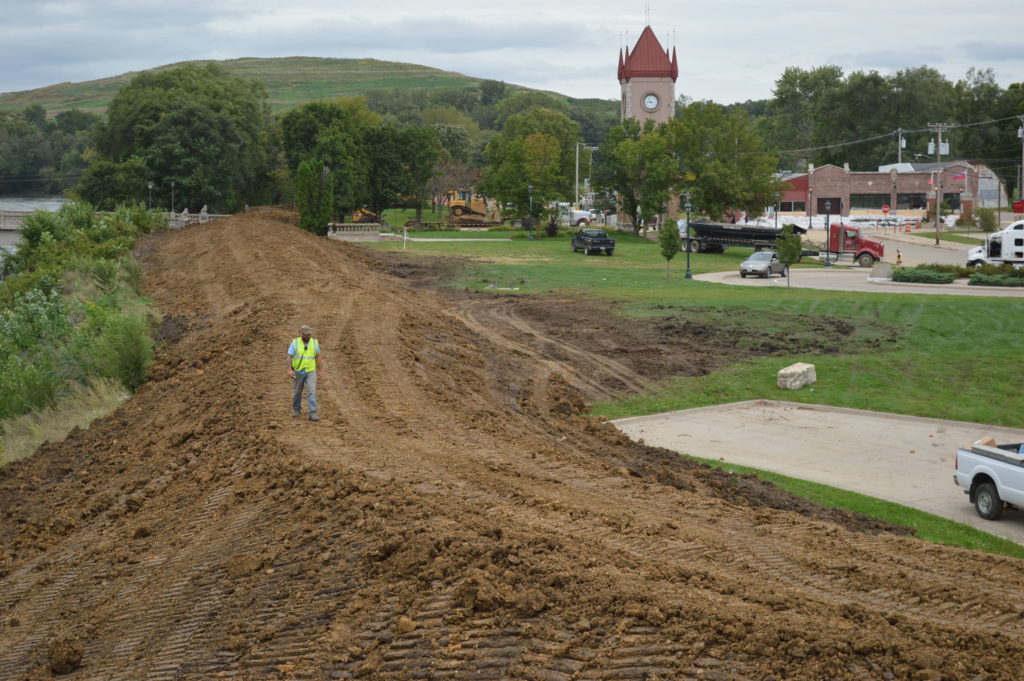 A worker crosses an earthen berm being constructed at the edge of Czech Village in Cedar Rapids on Sept. 25, 2016. (photo/Cindy Hadish) 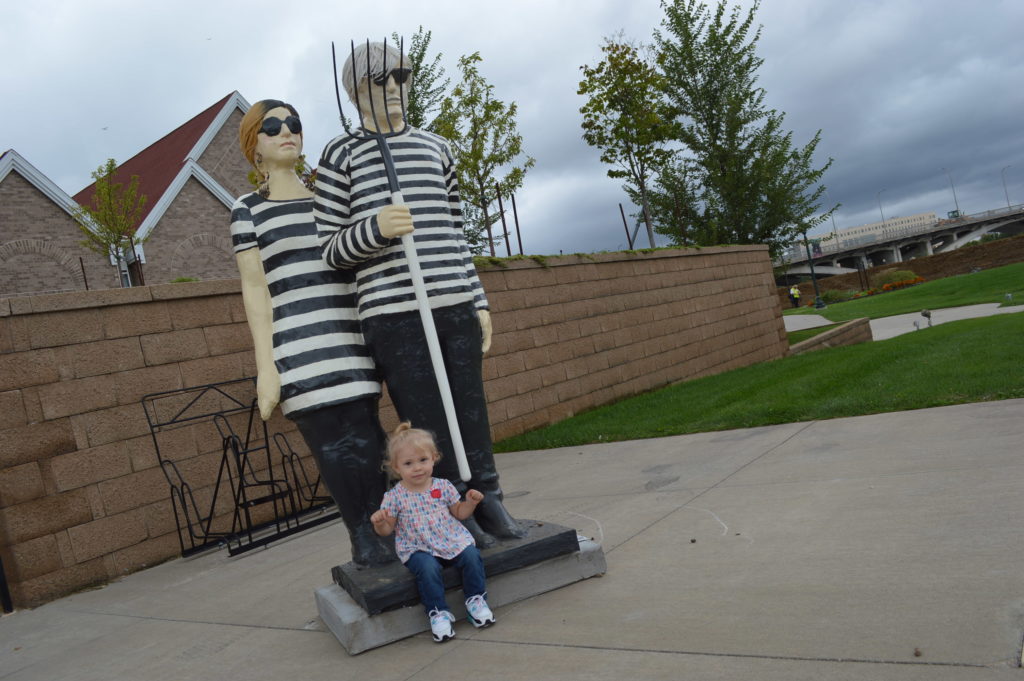 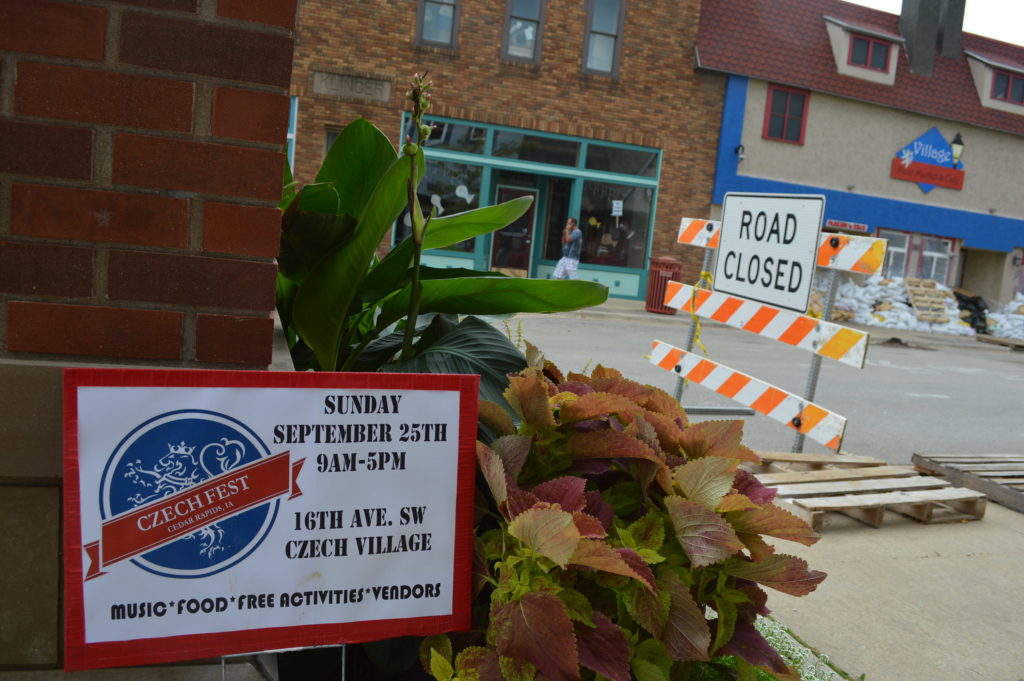 A sign advertises Czech Fest, a fall festival scheduled for Sept. 25 in Czech Village that was canceled because of the impending flood. (photo/Cindy Hadish) 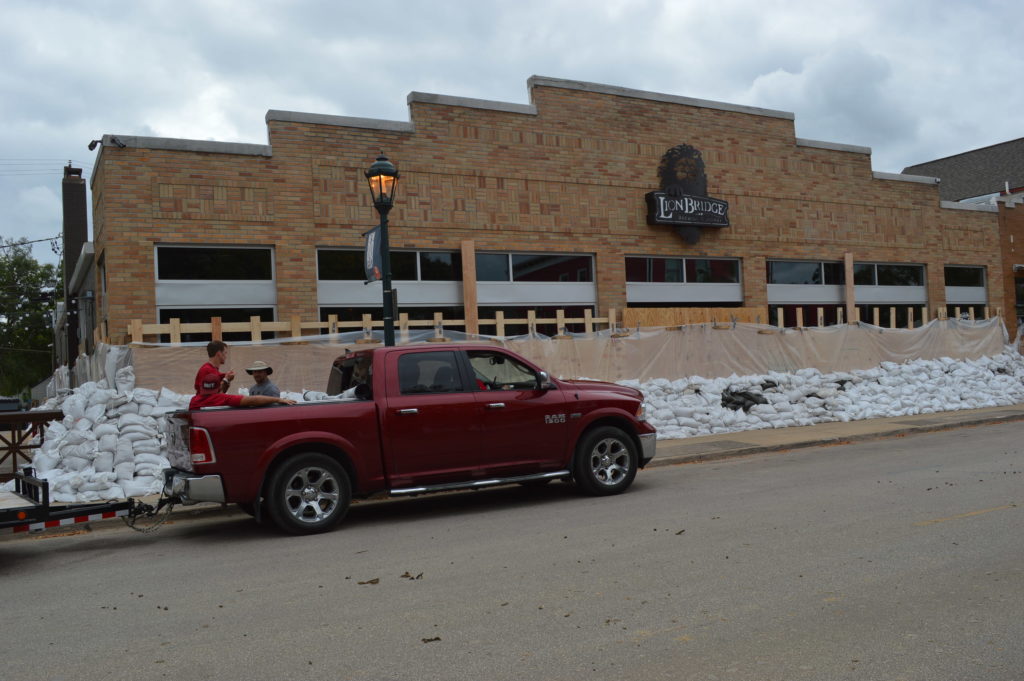 Volunteers drive past the Lion Bridge Brewing Co., which has been sandbagged ahead of the flood predicted in Cedar Rapids. (photo/Cindy Hadish) 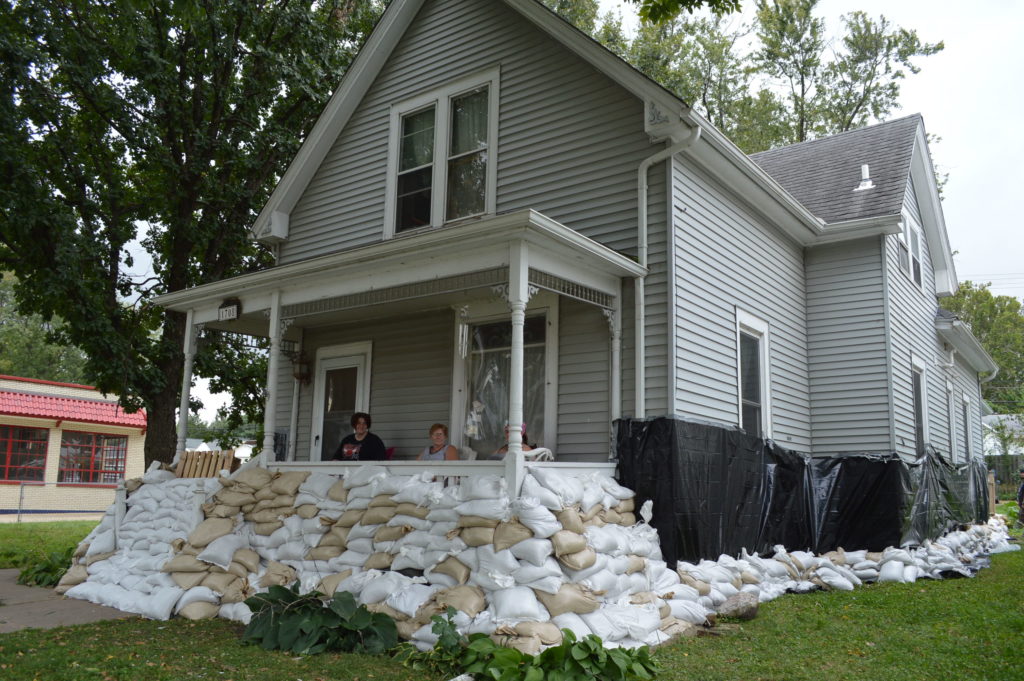 Josephine Yuza and two of her daughters sit on the porch of their home on C Street SW. The late-1800s home was flooded in 2008 and the family hopes it will be spared by floodwaters in 2016. (photo/Cindy Hadish) 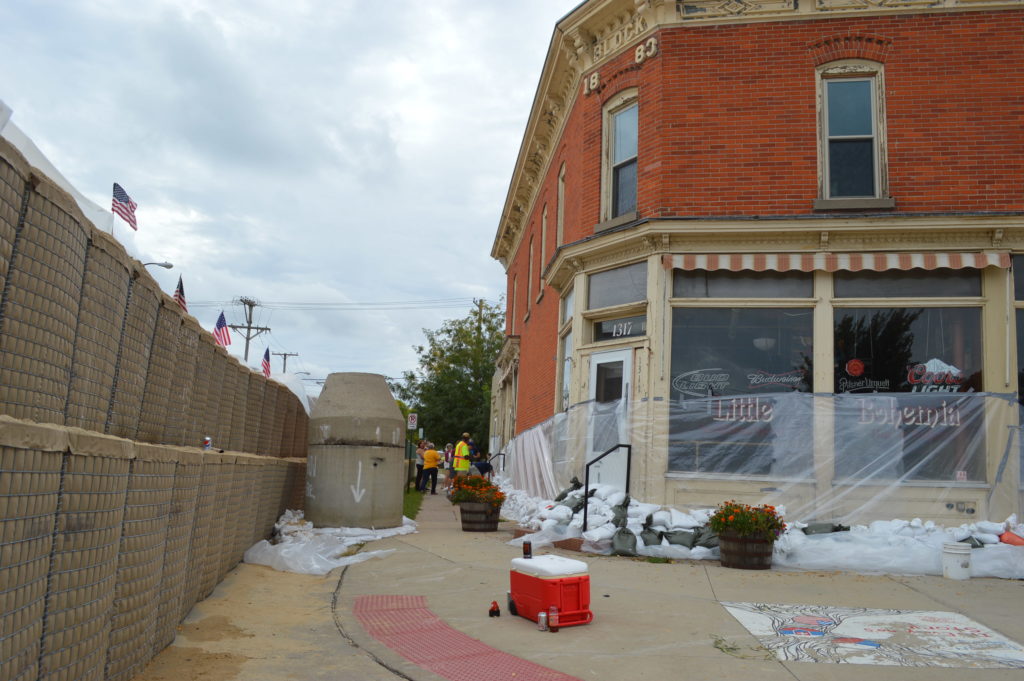 Volunteers work to sandbag the historic Little Bohemia building on Sunday, Sept. 25, 2016, in Cedar Rapids, Iowa. The building is on the dry side of HESCO barriers erected on 16th Avenue SE. (photo/Cindy Hadish) 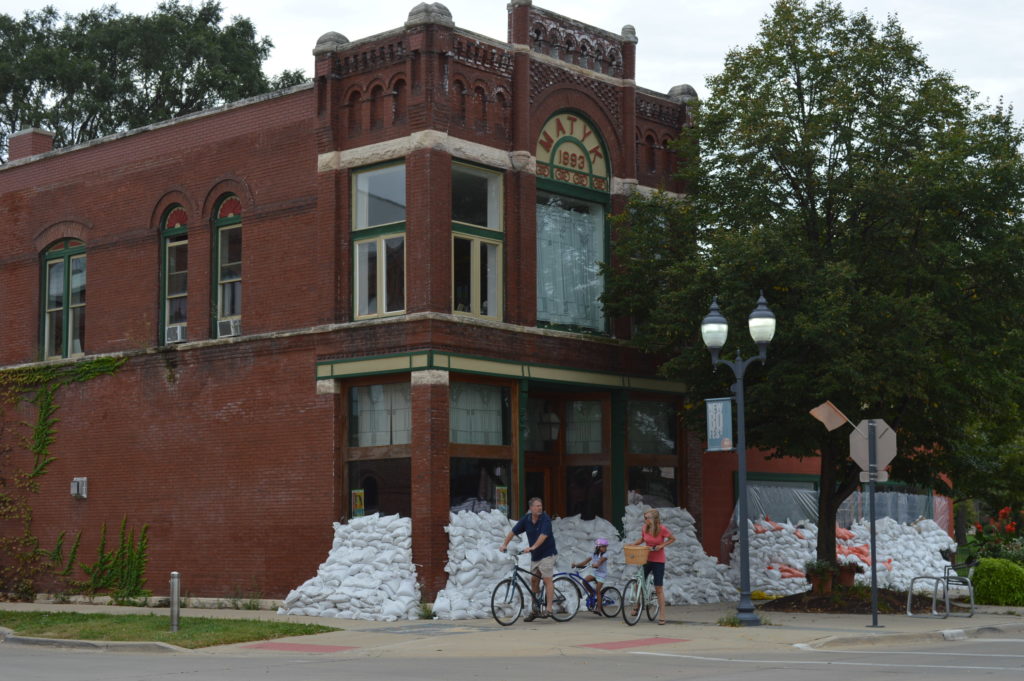 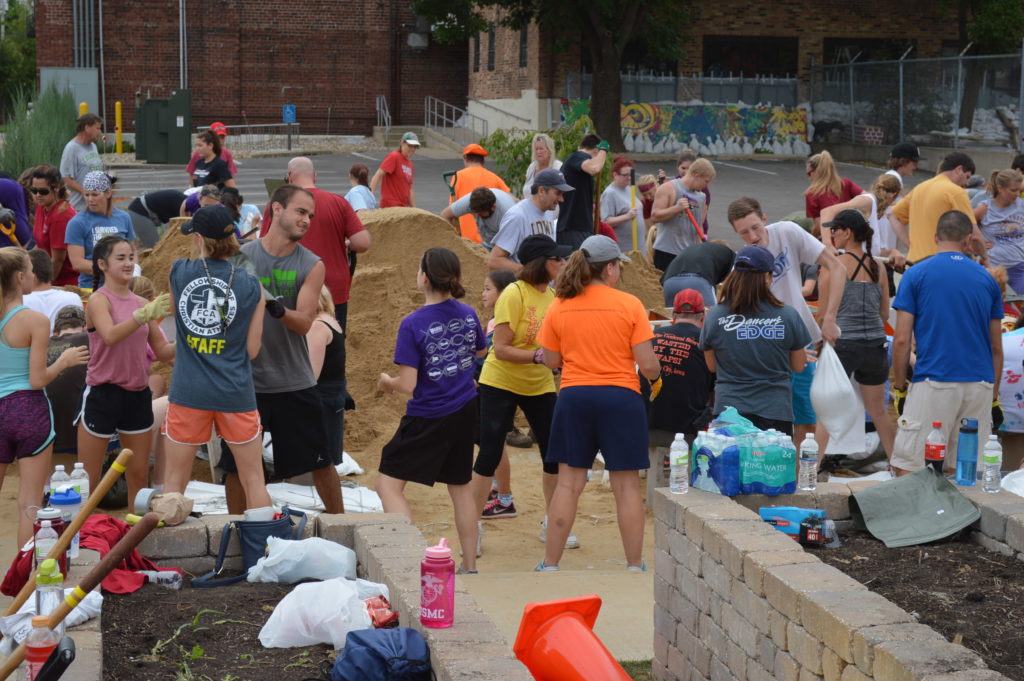 Students and other volunteers work on sandbagging efforts outside the Cherry Building on Sept. 25, 2016. (photo/Cindy Hadish) 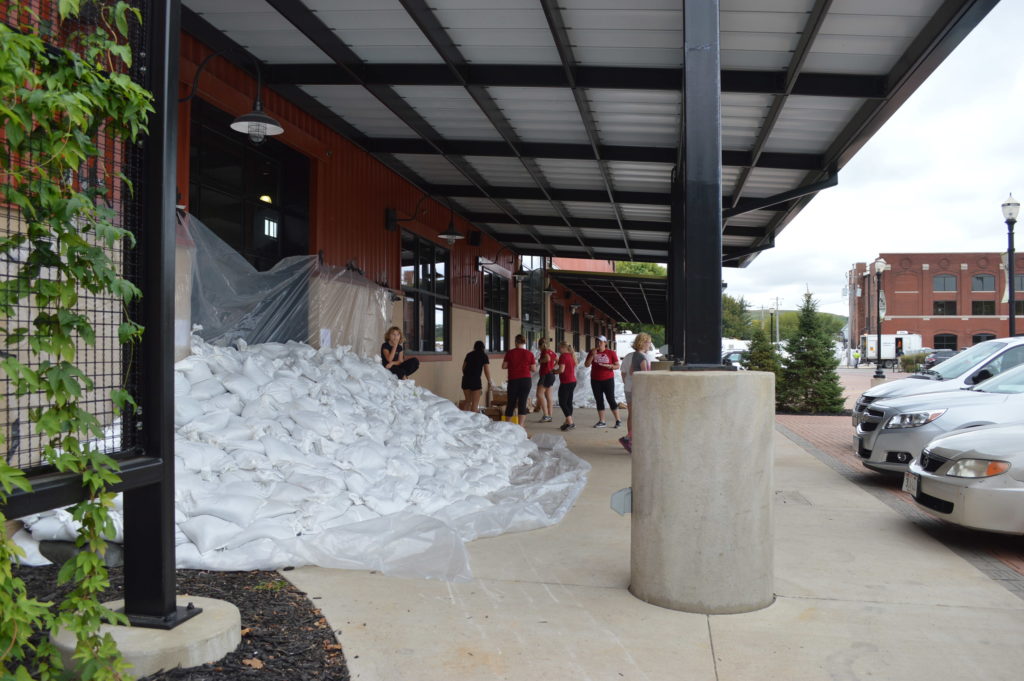 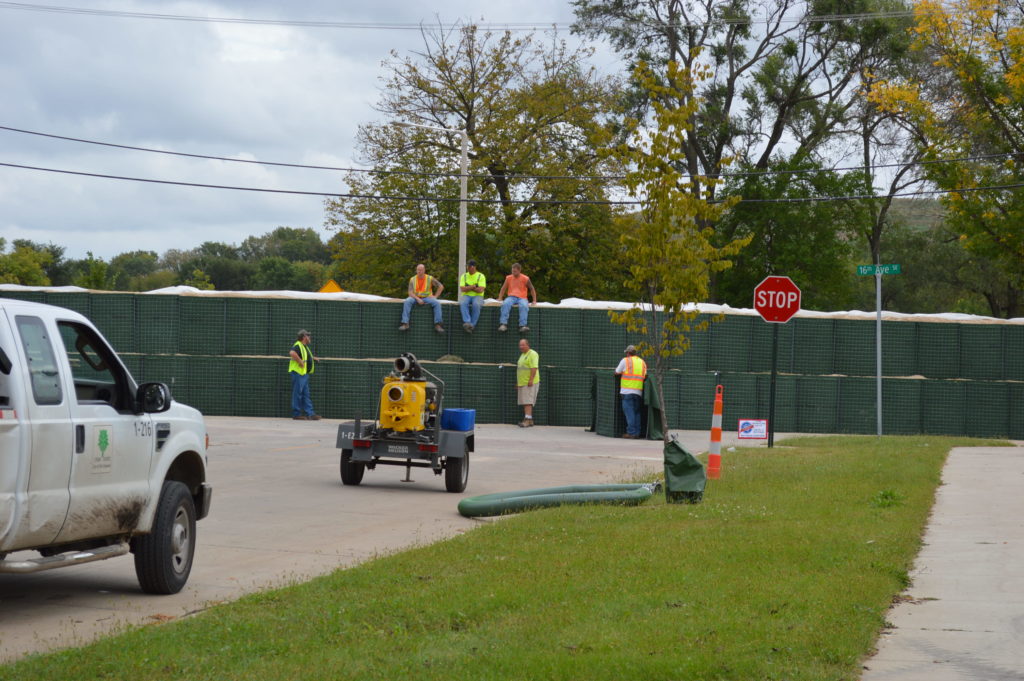 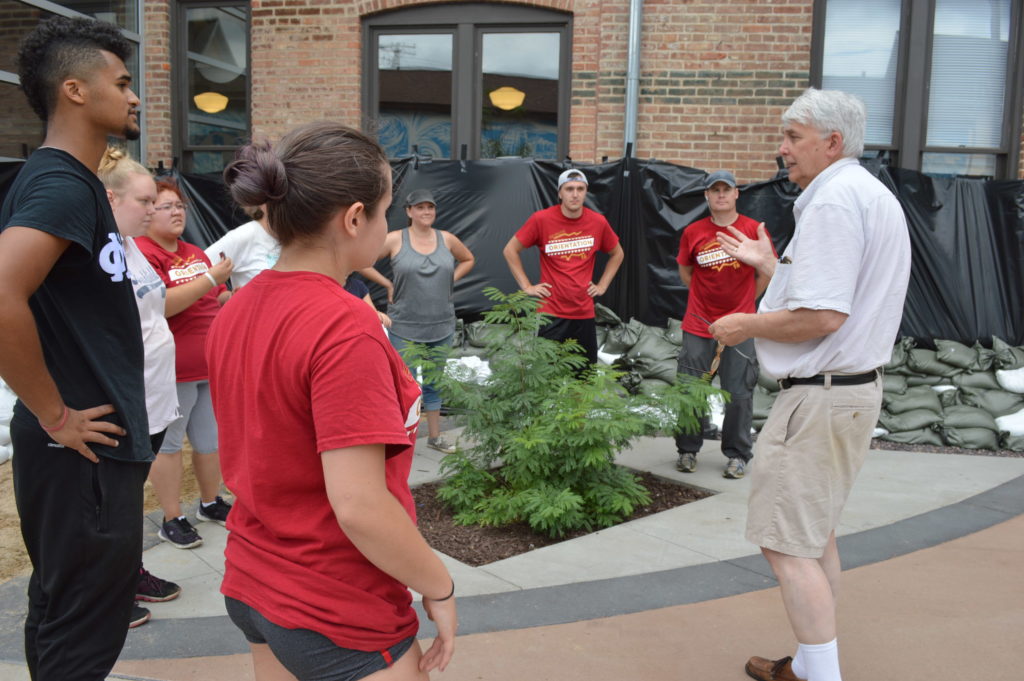 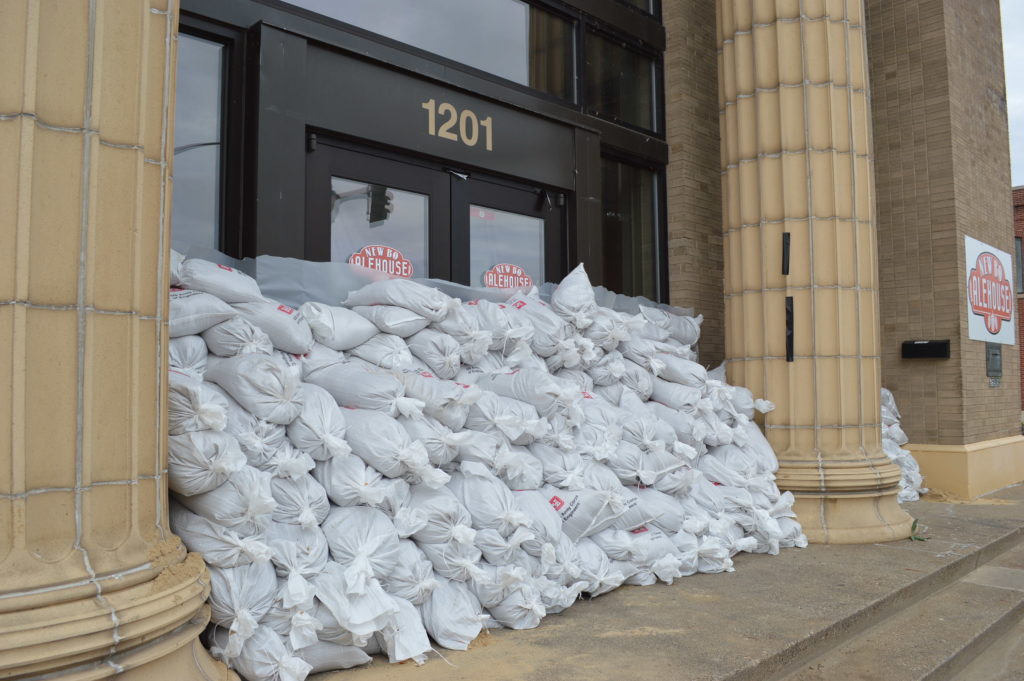