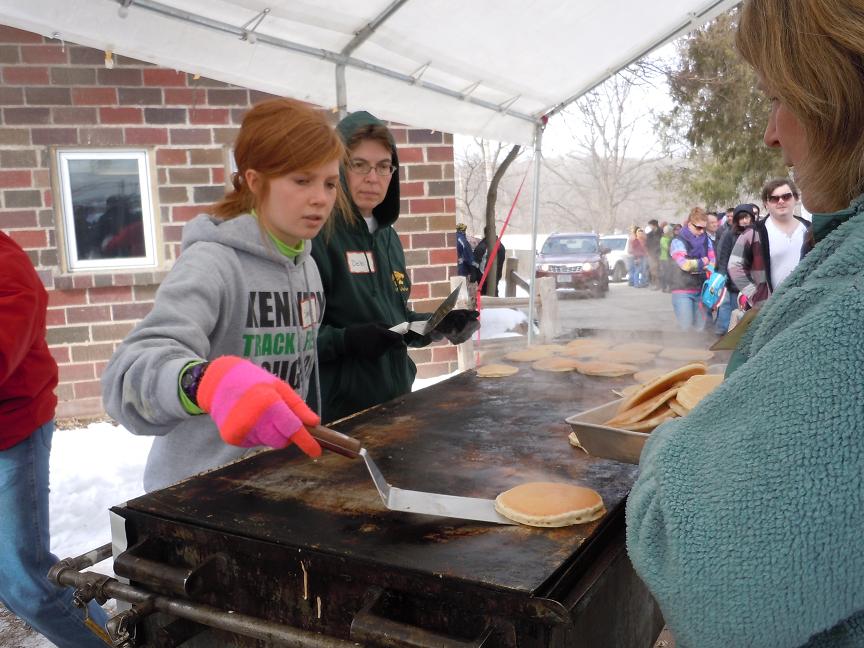 Volunteers flip pancakes at the Indian Creek Nature Center during a previous Maple Syrup Festival. The center has postponed the annual event due to the coronavirus pandemic. (photo/Cindy Hadish)

UPDATE: The Indian Creek Nature Center has set June 27-28 as the new dates for this year’s Maple Syrup Festival.

CEDAR RAPIDS — The coronavirus pandemic has led to numerous changes in events and public gatherings.

Just yesterday, March 15, 2020, the U.S. Centers for Disease Control & Prevention (CDC) released new guidelines that call for postponing gatherings of more than 50 people for the next eight weeks in light of the international outbreak of coronavirus, also known as COVID-19.

Some fundraisers have been canceled, including the Czech Heritage Foundation’s traditional St. Joseph’s Day Dance, which had been scheduled for Sunday, March 22, in Walford, Iowa.

Others have been postponed.

The Indian Creek Nature Center announced that its annual Maple Syrup Festival, set for March 21-22, will be rescheduled to a new date. The nature center also is temporarily closing its Amazing Space, Penningroth Barn and Etzel Sugar Grove Farm campuses to the public until further notice.

All Indian Creek Nature Center programs starting March 15th also have been canceled or postponed for a later date. New dates for the Maple Syrup Festival, one of the primary fundraisers for the nonprofit, have not been announced.

Like the nature center, organizations such as the Sustainable Iowa Land Trust (SILT) rely on fundraisers to keep their nonprofits operating. Donations help SILT acquire local farms to protect the future of Iowa’s farmland.

SILT is postponing SILTFest Iowa City until further notice. The group noted that its Iowa City gathering usually draws about 100 supporters and raises more than $7,000, and is asking donors to renew their memberships in light of the postponement.

On Monday, March 16, 2020, the National Czech & Slovak Museum & Library in Cedar Rapids announced it is closing for one month, beginning March 17, and reopening on April 17.

While the museum doors are closed, staff will be working and available to answer any questions at (319) 362-8500. The museum noted that staff will keep the public connected with virtual tours, educational programming, online exhibits, and podcasts.