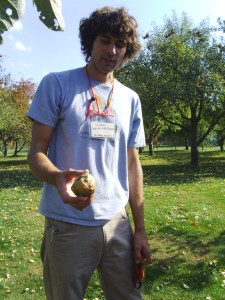 Warm weather early in the spring that prompted trees to bud was followed by frost and a summer drought that devastated many orchards.

Proof of the losses came in this report just issued by the U.S. Department of Agriculture.

Total production of Iowa’s commercial orchards – those with 100 or more fruit-bearing trees – dropped from 4 million pounds of apples in 2011 to 0.7 million in 2012.

Iowa’s losses were echoed elsewhere across the nation. According to the USDA report, New York’s apple growers reported that their crop was negatively impacted by early warm weather in March, which prompted budding, followed by freezing in April and drought conditions in June and July.

The Michigan apple crop potential was drastically diminished from a series of severe frosts in April. This followed abnormally high temperatures in March that had pushed budding far ahead of normal. As of mid-December, the harvest was two to three weeks ahead of normal due to the hot summer and small crop.

Washington state was an exception. Apple growers there reported good growing conditions, without losses from freezes or frost, which allowed for more picking days and more fruit being harvested last year.

The USDA report, Noncitrus Fruits and Nuts, 2012 Preliminary Summary, also details such fruit as peaches, grapes, blueberries and strawberries. Iowa’s production doesn’t register a blip in any of those categories.