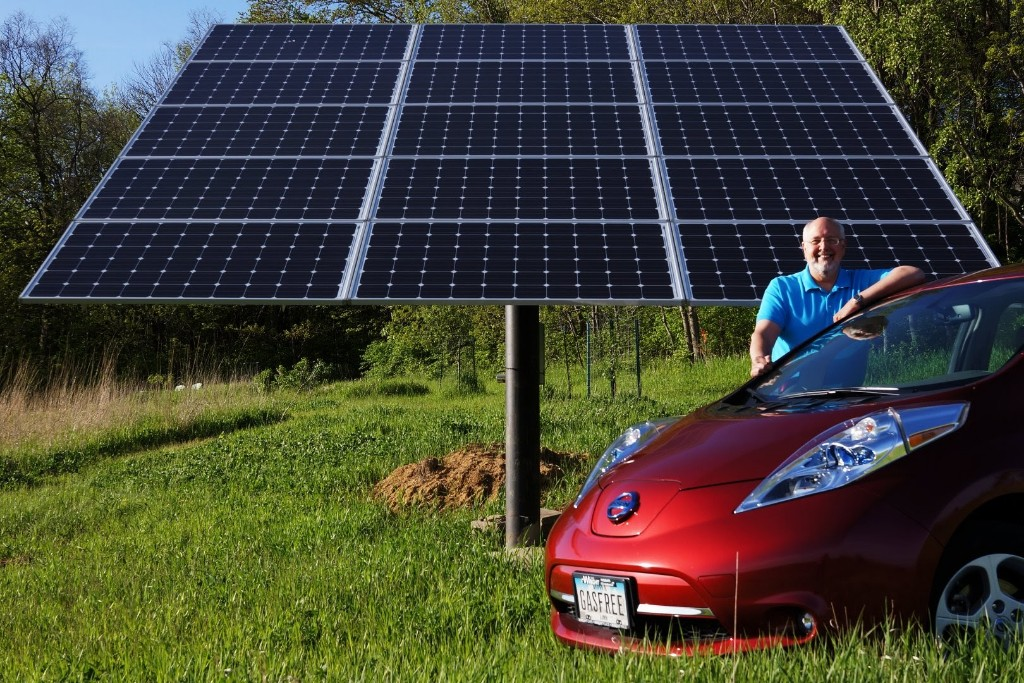 Marc Franke of Ely is shown with his Nissan LEAF and solar panels that supply the electricity. (Photo/National Drive Electric Week)

IOWA CITY — Proponents of clean energy see electric cars as a major piece in the battle against climate change.

For the second year, the Iowa City Farmers Market will offer an opportunity for people to talk to local owners of electric vehicles, during the Saturday, Sept. 14, 2019, market.

A group of local electric car owners will have a booth at the Iowa City Farmer’s Market on Saturday, September 14 from 7:30 a.m. to noon. During this time, interested people will be able to ask questions, get information and take a look at electric vehicles.

This event is part of National Drive Electric Week, September 14-22, 2019. It is a nationwide celebration to heighten awareness of today’s widespread availability of plug-in vehicles and highlights the benefits of all-electric and plug-in hybrid electric cars. They are less expensive and more convenient to fuel than gasoline vehicles, are better for the environment, promote local jobs, reduce our dependence on foreign oil and are fun to drive. Are you considering going electric? Come talk to car owners who have successfully done so.

Mike Carberry of Green State Solutions sees electric vehicles as an important part of the solution to our environmental problems. He is the owner of an electric Chevy Volt and says, “to solve the climate crisis we must quickly move to a 100% renewable energy electric economy. Our transportation sector needs to catch up with our efforts in wind and solar power. Electric vehicles (EV’s) need to lead the charge in electrifying our economy.”

Thanks to federal and state rebates and tax credits, decreasing prices in electric vehicle technology and the cheaper price of electricity compared to gasoline, the cost of owning and operating an electric vehicle is notably lower than that of many conventional vehicles. It’s also cleaner. In every region of the country, EV’s are lower in carbon and other dangerous emissions than average conventional cars, even after factoring in the emissions from the electricity they use.

Most new fully electric vehicles can drive 70 to 100 miles, with some current models going 200+ miles, on one charge. This is sufficient for most car trips. If you often drive long-distance, plug-in hybrid electric vehicles run on electricity until their battery runs out of charge, followed by gasoline. Imagine never or rarely going to a gas station again! Most EV’s are charged at home overnight.

Craig Mosher who lives at Prairie Hill, Iowa City’s new cohousing community says, “I love driving my all-electric Nissan LEAF. It is quick, quiet, very responsive and rides quite smoothly too. It’s wonderful to pass by gas stations and have almost no routine maintenance. In two years I haven’t had a single repair or maintenance bill. Our rooftop solar panels power my EV.”

Marc Franke from Ely who was an engineer for General Motors also owns an electric Nissan LEAF. He powers his vehicle from solar panels he installed on his property. “I’ve driven my car for nearly 6 years and the only routine maintenance has been tires and checking the suspension. There are no filters, hoses, belts, pumps, mufflers, emission controls and not even a drop of motor oil.”

Local electric car owners who will be at the booth at the Iowa City Farmer’s Market include: