Iowa “Corn Bear” believed to be killed in Allamakee County 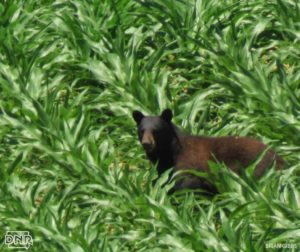 This photo, taken by Brian Gibbs, shows a black bear in a cornfield in June 2016, near Harpers Ferry, Iowa. (photo/KWQC)

The Iowa Department of Natural Resources reported today that a black bear, believed to be the “corn bear” seen recently on social media, was killed in a traffic collision.

Learn about bear sightings in Iowa and read on for more about the traffic accident from the DNR:

A young black bear was struck and killed by a truck Friday evening on Highway 76 near the Yellow River Forest in southeast Allamakee County.

The bear is believed to be the same one that had been pictured on social media last week in a corn field near the Yellow River Forest. It was a young bear weighing about 200 pounds. The last bear reported to be killed in a traffic collision in Iowa was just over a year ago on U.S. Highway 20 near Jesup.

DNR Conservation Officer Burt Walters said the bear has been frozen and will be analyzed. It is likely the bear will be put on display at a new Allamakee County nature center being constructed in Lansing.

Bears are believed to wander into Iowa from neighboring states such as Minnesota, Wisconsin and Missouri where there are breeding populations of black bears.

People seeing a black bear, or finding sign (tracks or scat), are urged to contact local Iowa DNR wildlife or law enforcement staff to report the animal’s presence. If the bear is causing conflicts with humans, livestock, pets, or bee hives then measures can be taken to deal with the situation. Human safety will always be the first concern, however respect for that animal receiving the attention from the public and how it is handled is also a primary concern.

Even though the black bear is not currently managed in Iowa with wildlife management laws or a regulated season, the Iowa DNR’s law enforcement and wildlife personnel will continue to play a lead role in public reports of black bears. However, in cases where human safety or livestock depredation are a concern, the DNR will work closely with the following partners: USDA-Wildlife Services, Iowa Dept. of Agriculture and Land Stewardship – State Veterinarians (IDALS), local police departments, county sheriffs, and other officials as needed.

In 2015, there were at least three to four black bears reported several times as they moved around northeast Iowa. In addition to the bear killed on the highway near Jesup, mushroom hunters found a dead bear along the Fayette-Clayton County border in May of 2015.