Iowa: From drought to flooding to normal? 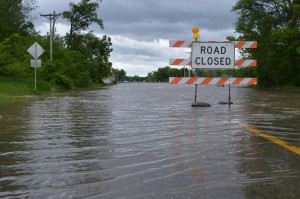 Highway 63 into Chelsea, Iowa, was closed due to flooding on May 30, 2013. Iowa’s precipitation is setting records this spring, but the state is now trending toward normal. (photo/Cindy Hadish)

After our drought worries earlier this spring and flooding concerns the past few weeks, could Iowa be on track for a “normal” summer? (And really, what is normal in Iowa, anyway?)

Here is the most recent water summary update from the Iowa Department of Natural Resources:

The overall situation in Iowa is continuing to improve and approaching normal. While there are some areas of concern for both flooding conditions and for slightly lower than normal groundwater, overall conditions are encouraging. Rainfall over the past several weeks has resulted in significant improvement. Average precipitation was above normal, and temperatures were below normal for the two-week period. As a result, the drought designated area of the state continues to shrink, and is now only about 10 percent of the state. Stream flows are moving toward normal levels,although the majority of streams are still in the “above normal” stage. Shallow groundwater in areas of concern is improving as well.

Drought Monitor
Conditions continue to improve in Iowa, with this week’s drought monitor indicating
almost 90 percent of the state is free from drought. Parts of northwestern Iowa
continue to be abnormally dry. A small area along the Missouri River, amounting to
less than 1 percent of the state, is designated as D1 Drought – Moderate. Rainfall
patterns and cooler weather have continued to reduce Iowa’s drought designated
areas. Just three months ago (mid-March) nearly one-third of Iowa was designated
as D3 – Extreme Drought, and over 99 percent of the state was in some form of
drought. Now no areas of the state are rated worst than D1.
Precipitation
Iowa’s weather over the past two weeks has been less extreme than seen in recent
months. Temperatures averaged 3.0 degrees below normal for the period, and
rainfall averaged slightly above average. Rainfall was as low as 0.5 inches near
Indianola and as high as almost 6 inches at Shenandoah. The statewide average
precipitation was 2.6 inches while normal for the period is 2.3 inches. Wettest
conditions were in the extreme northwest, the southwest corner, far southern Iowa
and much of northeastern Iowa. A welcome area of much drier conditions extended
from Madison County northeastward to Dubuque and Clinton. Numerous records
were set for excessive precipitation for the period ending May 31, including those
for wettest May, wettest spring and wettest year-to-date.
Temperatures have been unusually low for the past three months with 2013 a
close second to 1960 as the coldest spring in 121 years. However, Iowa rapidly
transitioned to a more typical summer weather pattern June 11 with this warmer
pattern expected to continue for the foreseeable future.
For more information, see: www.iowadnr.gov/watersummaryupdate.
EnvironmentDepartment of Natural Resources, DNR, drought, flooding, floods, Iowa