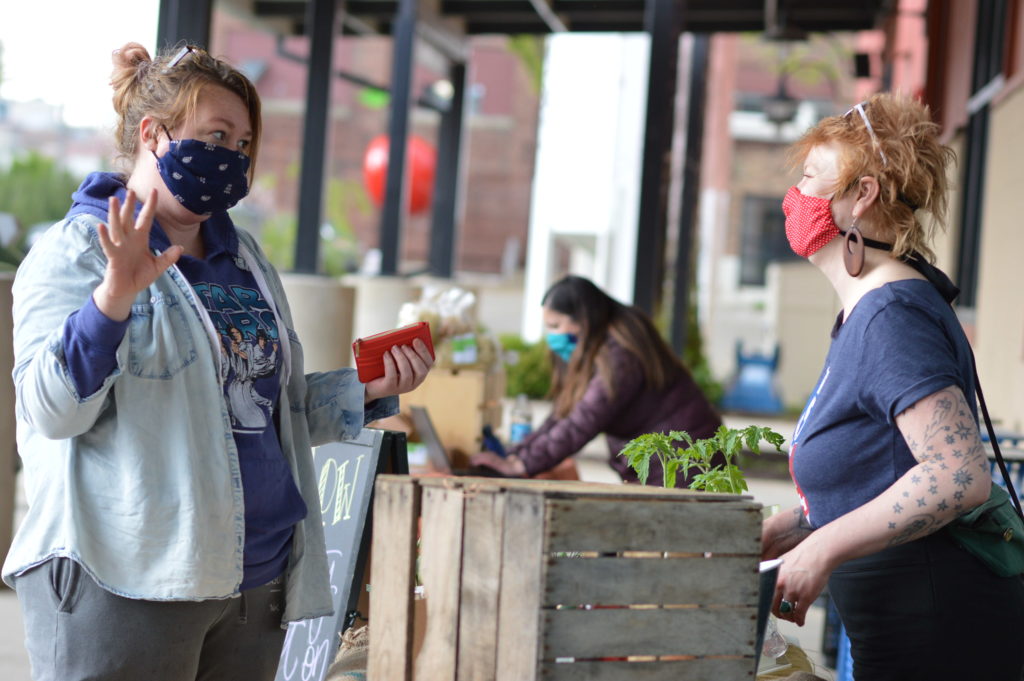 Even as Iowa surpasses 300 deaths due to the coronavirus, Governor Kim Reynolds announced that restrictions on many businesses in the remaining 22 counties under a public health emergency order will be allowed to expire as of May 15.

“Many Iowans look forward to getting back to normal,” Reynolds said at her May 13 press conference. “I have full confidence in Iowans and in our businesses to do the right thing.”

The announcement means barber shops, hair salons, massage parlors and other businesses that were closed statewide can open, and restaurants and other businesses that were closed in the 22 counties under emergency order will be allowed to reopen on May 15, with some state guidance, although bars and casinos remain closed statewide.

Reynolds’ proclamation permits salons, barbershops, and massage and tattoo establishments to reopen throughout Iowa “with appropriate public health measures in place.” It also permits restaurants, fitness centers, libraries, and race tracks to reopen in the 22 counties where they have remained closed. Changes are effective at 5 a.m. Friday, May 15.

The proclamation continues other ongoing closures and public health measures, including the prohibition on social, community, recreational, leisure, and sporting gatherings and events of more than 10 people, until 11:59 p.m. May 27, 2020.

It also encourages vulnerable Iowans, including those with preexisting medical conditions and those older than 65, in all counties to continue to limit their activities outside of their home, including visits to businesses and other establishments. Read the proclamation.

As of May 13, with 377 new cases, the state has reported 13,289 confirmed cases of COVID-19, the respiratory illness caused by the novel coronavirus.

With an additional 17 deaths — the third-highest single-day death toll — so far, 306 Iowans have died of COVID-19.

When asked by a reporter, Reynolds said she is no longer announcing those numbers because they are available on the state’s website at coronavirus.iowa.gov.

Health experts have cautioned against reopening states too soon and national guidance calls for 14 days of decreasing cases before lifting restrictions. Even as Reynolds said she is looking at data, those decreases have not been happening statewide, though Deputy Director Sarah Reisetter of the Iowa Department of Public Health, said some counties may have already peaked.

In just the past two days, the percentage of positive tests increased to 15.5 percent, up from 7.5 percent Tuesday, the number of hospitalized Iowans increased from 385 to 388 and the number of long-term care facility outbreaks, where most of the deaths are tied, is now at 33 statewide, up from 32 on Tuesday.

Other than referencing increased testing and ensuring surge capacity in hospitals, Reynolds did not specifically answer reporter’s questions regarding what criteria she would use to reinstate mitigation efforts or what Iowans can expect in counties such as Polk, that are considered “hot spots” of coronavirus spread.

Employees at high-risk of COVID-19 complications or those who live with someone at high risk can call the state legal assistance hotline with their concerns about having to return to work, she said.

Iowa was one of relatively few states to never have a “shelter in place” order, but Reynolds had issued a variety of proclamations regarding restaurants and other businesses, which have gradually been relaxed.

The resulting proclamations left some Iowans confused, particularly over which counties remained under the various orders. 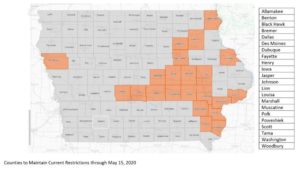 Reynolds had partially lifted restrictions on businesses in the other 77 Iowa counties as of May 1.

The governor subsequently eased restrictions, even in those 22 counties, and allowed some venues or activities to open statewide, such as farmers markets, campgrounds and religious services.

Fitness centers in those 22 restricted counties were allowed to reopen as of May 8 on an appointment basis, provided that the facility permits only a single patron at one time.

Reynolds previously issued a proclamation to allow any public or private campground to reopen as of May 8, “provided that the campground implements reasonable measures under the circumstances of each campground to ensure social distancing, increased hygiene practices, and other public health measures to reduce the risk of transmission of COVID-19.”

That proclamation also allowed the resumption of dental services and reopening of drive-in movie theaters, tanning facilities and medical spas throughout the state beginning May 8.

In late April, even as health authorities said the virus was presumed to be in circulation throughout the state, 15 counties still had no confirmed cases. As of May 12, that had dwindled to five of Iowa’s 99 counties: Adams, Decatur, Lucas and Ringgold in southern Iowa and Emmet County in the far north.

State Senator Rob Hogg (D-Cedar Rapids) pointed out that after the first week in which businesses in the 77 counties were “reopened,” confirmed cases of COVID-19 increased  fastest in most of those counties.