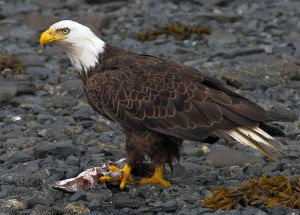 Sometimes you just have to wonder what motivates people.

If anyone has an answer behind this Iowan’s motivations in chasing down and killing a bald eagle, please share your thoughts.

Fortunately, this guy will be paying a price for his actions, though some might wonder if the sentence is severe enough.

The U.S. Fish and Wildlife Service sent the following today:

An Iowa man will be going to jail for intentionally killing an American bald eagle. On November 6, 2014, Jason John Thomas, age 36, of What Cheer, Iowa, was sentenced by District Court Judge John A. Jarvey to 60 days imprisonment for taking and possessing a bald eagle, announced United States Attorney Nicholas A. Klinefeldt.

On March 16, 2011, Thomas took and possessed a bald eagle in rural Mahaska County. During a boat ride, Thomas saw the bald eagle on a bluff above the river. Thomas pursued the eagle as it flew down river, captured it after it landed in the river, and then struck and killed the bald eagle.

“Cases like this often can’t be made without someone who comes forward with information. We could solve a lot more serious wildlife crimes if witnesses were willing to become involved,” said U.S. Fish and Wildlife Service Office of Law Enforcement Deputy Assistant Director Edward Grace.

Concerned citizens are encouraged to call or email the national Turn In Poachers hotline if they witness any wildlife crime: 1-844-NWR-TIPS (697-8477) or email NWR_TIPs@fws.gov. The hotline is open 24 hours a day / seven days a week.

“We appreciate the work of the Iowa Department of Natural Resources and the U.S. Attorney’s Office and are thankful that the judge in this case found that prison time was appropriate,” continued Grace.

Thomas was ordered to serve one year of supervised release following the imprisonment, pay a $2,000 fine, and pay $25 toward the Crime Victim Fund. Special conditions of the supervised release include that Thomas shall perform 80 hours of community service, and shall not engage in any form of hunting.

The investigation was conducted by the U.S. Fish and Wildlife Service and the Iowa Department of Natural Resources. The case was prosecuted by the United States Attorney’s Office for the Southern District of Iowa.

For more information on the Midwest Region of the U.S. Fish and Wildlife Service visit http://midwest.fws.gov.