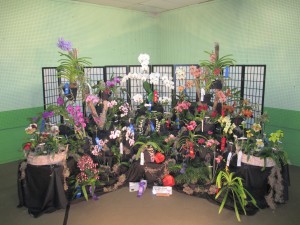 Congratulations to the Eastern Iowa Orchid Society, winners of the prestigious American Orchid Society Show Trophy for the best Orchid Exhibit Display at the Batavia Orchid Show in Chicago!

Look for information on the group’s next meeting March 5 in Iowa City, on the events calendar, above, plus more activities in the coming year, including an exhibit at the Noelridge Greenhouse during Easter weekend and a show and sale in October.

The group’s Nile Dusdieker sent more information on the trophy, awarded during the Feb. 16-17 event at the Dupage County Fairgrounds in Chicago:

The show was attended by over 800 people and had exhibits by 6 other orchid societies from around the Midwest, plus regional vendors and artists.

The Eastern Iowa Display contained 66 plants in flower and was arranged in a crescent around two driftwood trees to add vertical height. The display received 42 ribbons including 3 Best of Class and 1 Special Award for individual flowers in addition to the Show Trophy.