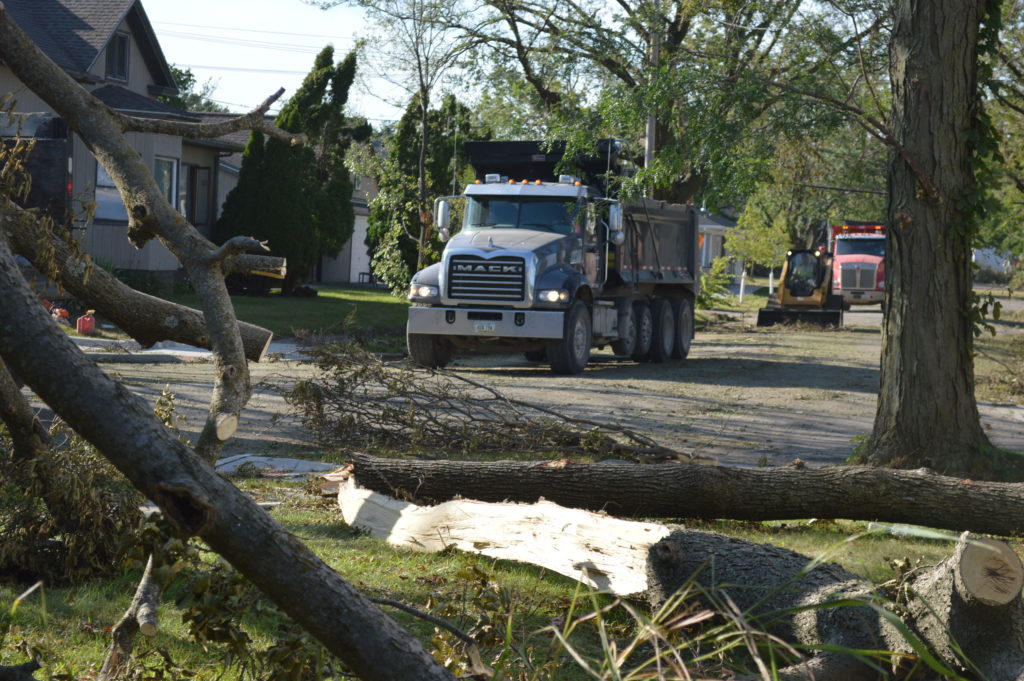 UPDATED 6:45 p.m. Aug. 17 and Aug. 19, 2020, with National Weather Service information and Aug. 17, with a statement from congresswoman Abby Finkenauer regarding Trump’s failure to approve federal disaster declaration for individual assistance.

Iowans still waiting for assistance a full week after a devastating derecho tore through the state can’t be blamed for wondering why so little, so late.

After the unprecedented 2008 flood in Cedar Rapids, the National Guard made a quick appearance to jump-start the city’s road to recovery. The Red Cross made regular rounds of neighborhoods to provide hot meals and other provisions. FEMA workers also quickly made their way to assess damage in Iowa’s second-largest city, where 14 square miles were inundated with record high floodwaters. 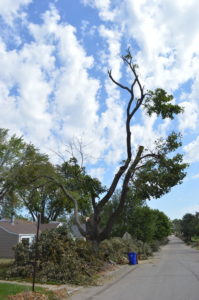 Remains of trees are seen near Prairie Drive and G Avenue NE in Cedar Rapids on Aug. 16, 2020. (photo/Cindy Hadish)

Now, with all 75 square miles of Cedar Rapids ravaged by the Aug. 10 straightline windstorm, toppling trees onto rooftops and cars; leaving more than 1,000 residences initially deemed uninhabitable, and still tens of thousands without electricity, help has been excruciatingly slow, and residents are left wondering where those agencies are now.

The National Weather Service reported on Aug. 17 that a swath of damage from Benton County, through portions of Linn, Jones, and Cedar Counties, is consistent with intermittent winds in the 110 to 130 mph range. A radio transmission tower north of Marion in Linn County collapsed, due to straight line winds estimated around 130 mph, a speed equivalent to a strong EF2 tornado. The maximum measured wind gust was 112 mph at Midway, Iowa, in Linn County.

On Aug. 19, the National Weather Service updated its information to state that wind speeds were estimated at 140 mph in Cedar Rapids, with the strongest winds in southwest Cedar Rapids.

Neighbors and volunteers have joined together to clear streets of tree debris and help as best as they can. But maybe “Iowa nice” is just too nice. More assistance is needed immediately to restore electricity for huge swaths of the city where residents are running out of food and, without electricity, many have no options for cooking.

Alliant Energy reported just under 40,000 customers still without power in Linn County as of Aug. 17, one week after the storm.

Resource centers finally have been opened to offer a place to charge needed medical equipment, provide food and other necessities, but that doesn’t help residents whose cars were crushed during the storm or those unable to drive. Two overnight shelters also recently opened, in Palo and at Veterans Memorial Coliseum in Cedar Rapids.

Reports of apartment dwellers – many of them refugees – having to sleep in tents and find food and water on their own reflects a lack of leadership on numerous levels during this humanitarian crisis. And a lack of communication, as cell towers have been out of service and Internet has been down, exacerbated the problems, along with the coronavirus pandemic, which had already hit the state hard.

Note: The Greater Cedar Rapids Community Foundation created a disaster fund for derecho recovery. If you can, please donate at: www.gcrcf.org

While Trump tweeted that he had approved the declaration on Aug. 17, he in fact, did not.

Congresswoman Abby Finkenauer issued the following statement after additional information was provided by FEMA to the Congressional Delegation with respect to the President’s previously stated “full” approval of the State of Iowa’s request for an expedited major disaster declaration:

“While I am appreciative of the President’s quick action in approving Public Assistance for Iowa communities to cleanup and rebuild, I’m deeply disappointed he has not granted the State of Iowa’s full request for Individual Assistance, including assistance to individuals and homeowners, in response to the derecho storm that devastated Cedar Rapids and communities across eastern Iowa,” Finkenauer said. “We must ensure no Iowan is left behind by this tragedy. I ask the president to rectify his omission immediately.”

“I will continue fighting for a fast and comprehensive review of the impacts of this storm on Iowa families and businesses — and all necessary and appropriate federal relief for families as well as local governments,” Finkenauer said.

The following is a timeline of the events surrounding the disaster declaration:

At 9:30 a.m. Monday, it was reported that Trump said he had approved the declaration.

At 1:33 p.m. Monday, Trump announced via Twitter that he had “Just approved (and fast) the FULL Emergency Declaration for the Great State of Iowa.”

It’s now clear that those statements and reports were inaccurate, Finkenauer’s statement said.

Around 4:30 p.m.  Monday, FEMA provided the Federal Disaster Declaration Fact Sheet clarifying that the president in fact has not fulfilled the governor’s full request and has not approved assistance to individuals and households. Rather, according to the  Federal Disaster Declaration Fact Sheet, the Individual Assistance requested by Governor Reynolds for families and households in 27 counties remains “under review,” while Public Assistance for “emergency work and the repair or replacement of disaster-damaged facilities” has been approved in 16 counties.

The document gives no timeline for when or if individual assistance will be approved.

With winds in excess of 100 mph, the derecho (a Spanish word for “straight”) has been described as an “inland hurricane,” but the response to this natural disaster has left many Iowans feeling abandoned when leadership at local, state and federal levels is needed the most.

More: See photos from initial days after the derecho windstorm 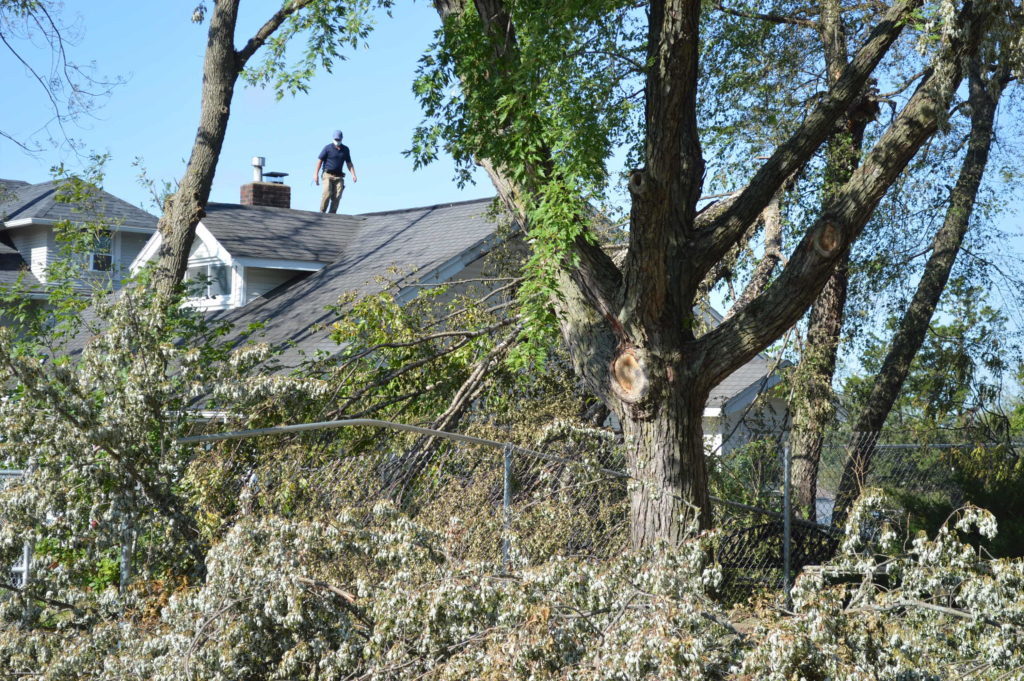 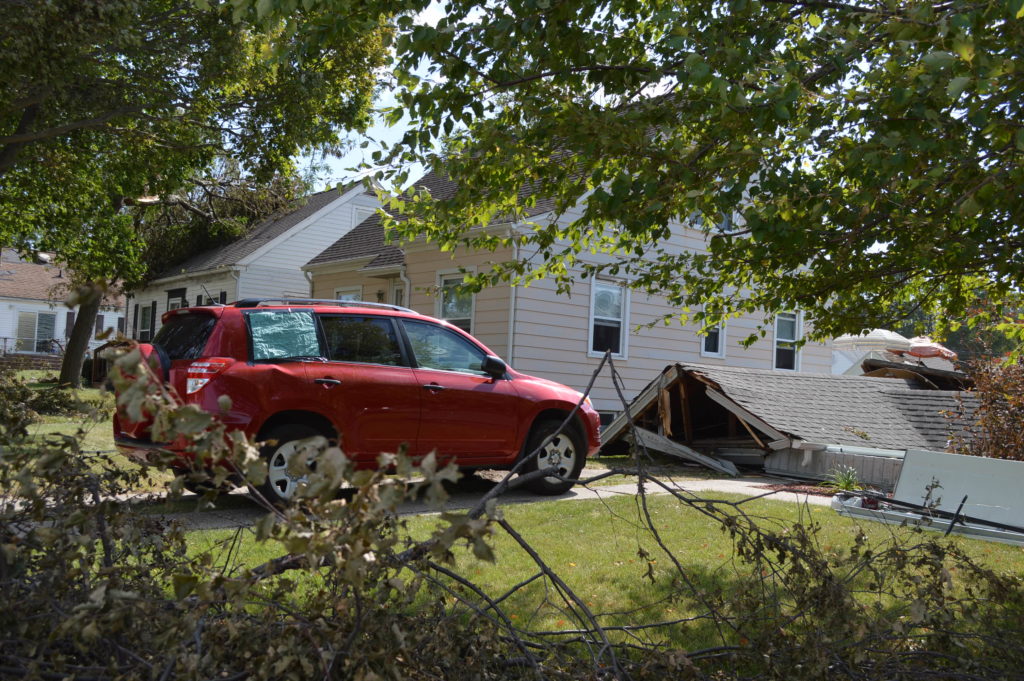 A damaged vehicle remains parked outside a collapsed garage along 20th Street NE in Cedar Rapids on Aug. 16, 2020. (photo/Cindy Hadish) 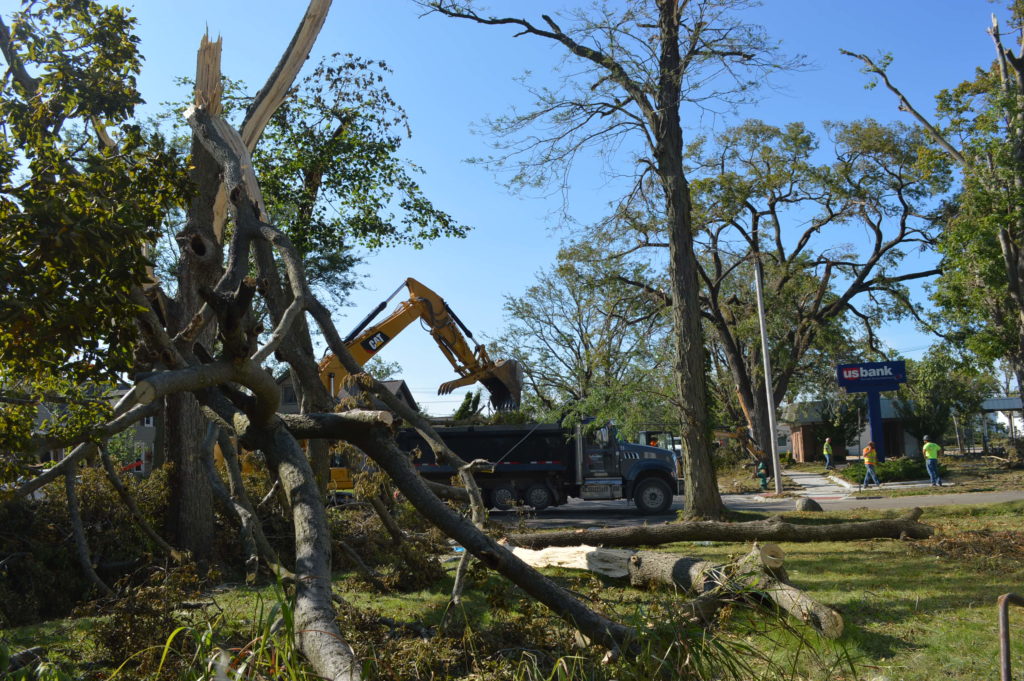 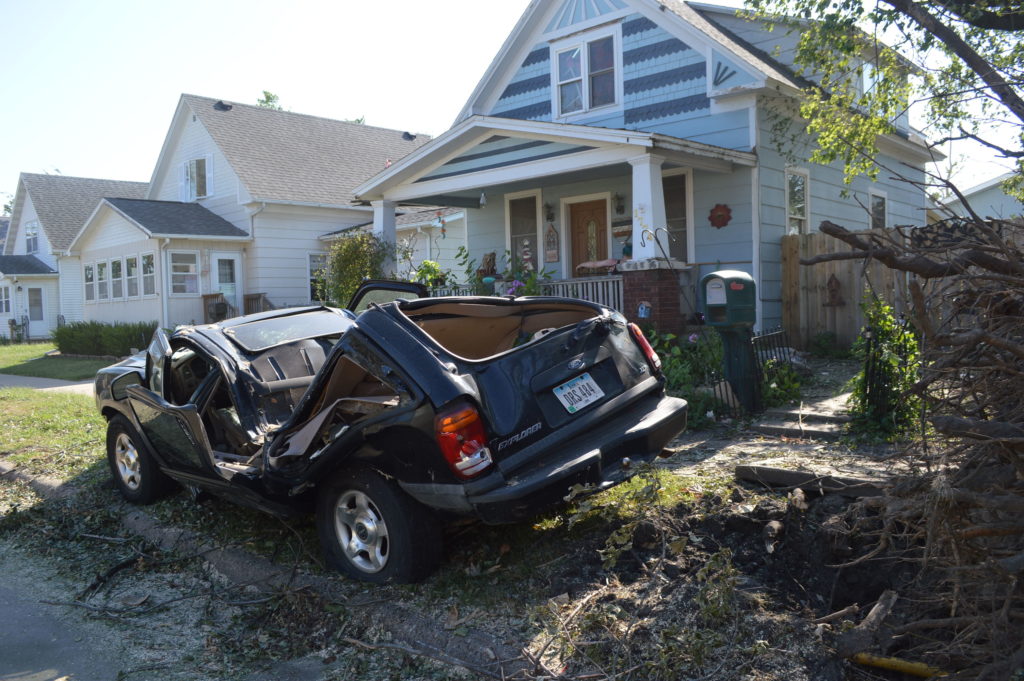 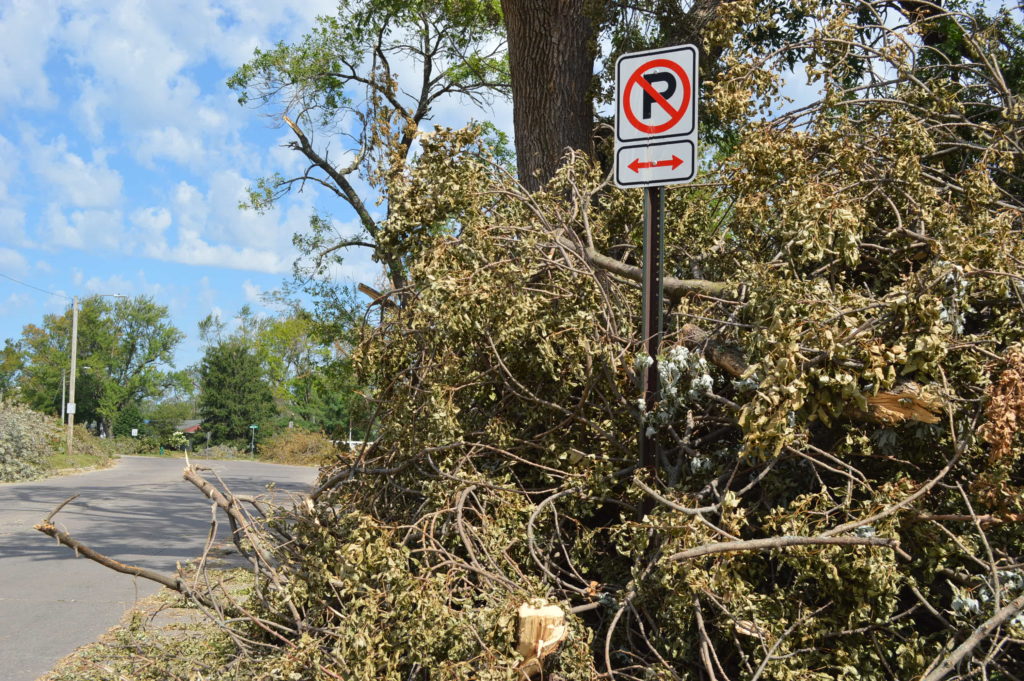 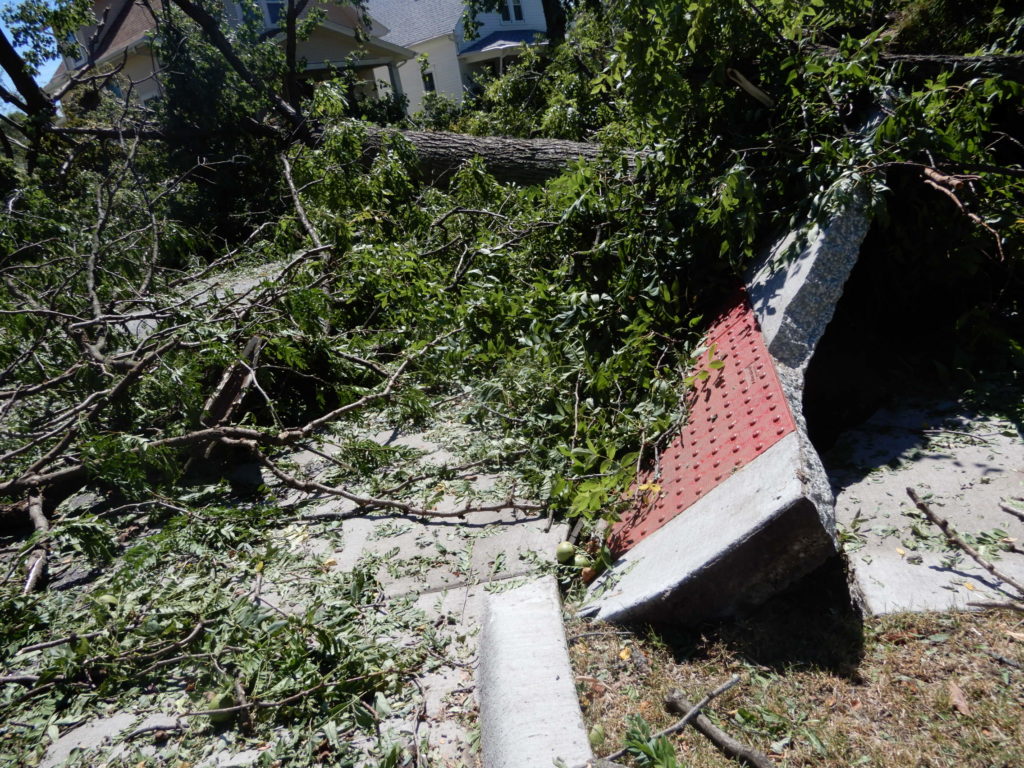 Tree roots lifted a sidewalk on Hamilton Street SW during the Aug. 10, 2020 derecho windstorm. The area also had been hard-hit by the 2008 flood in Cedar Rapids. (photo/Cindy Hadish) 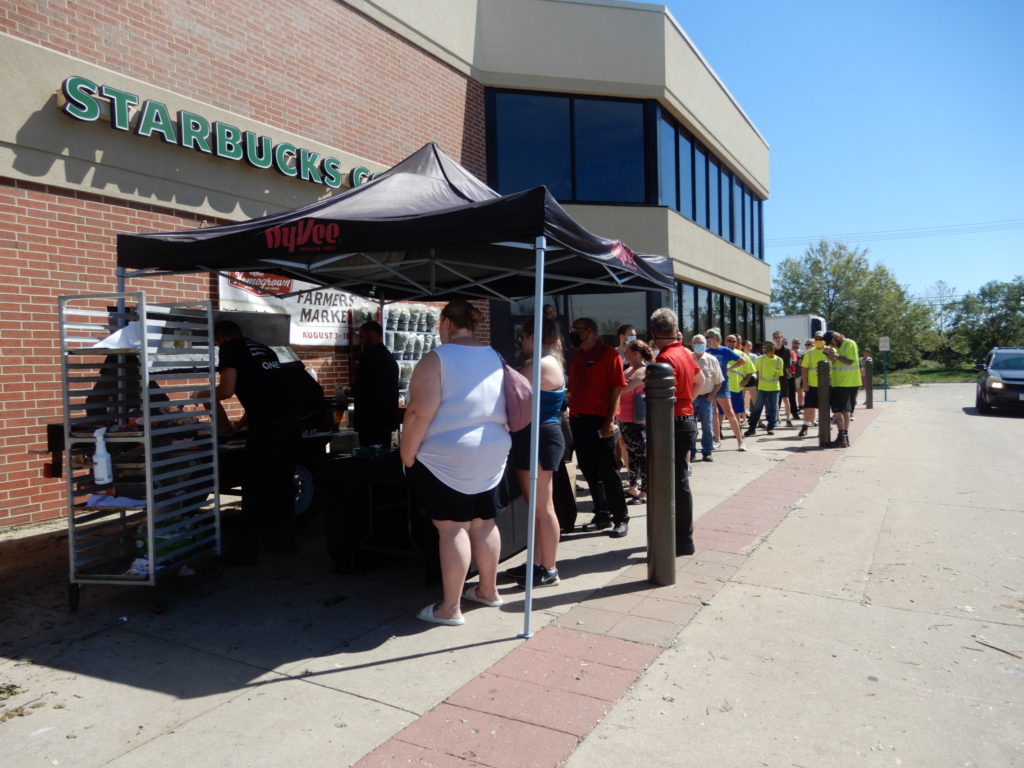 Residents of southwest Cedar Rapids line up to buy prepared food at the Wilson Avenue Hy-Vee after the Aug. 10 derecho windstorm.(photo/Cindy Hadish) 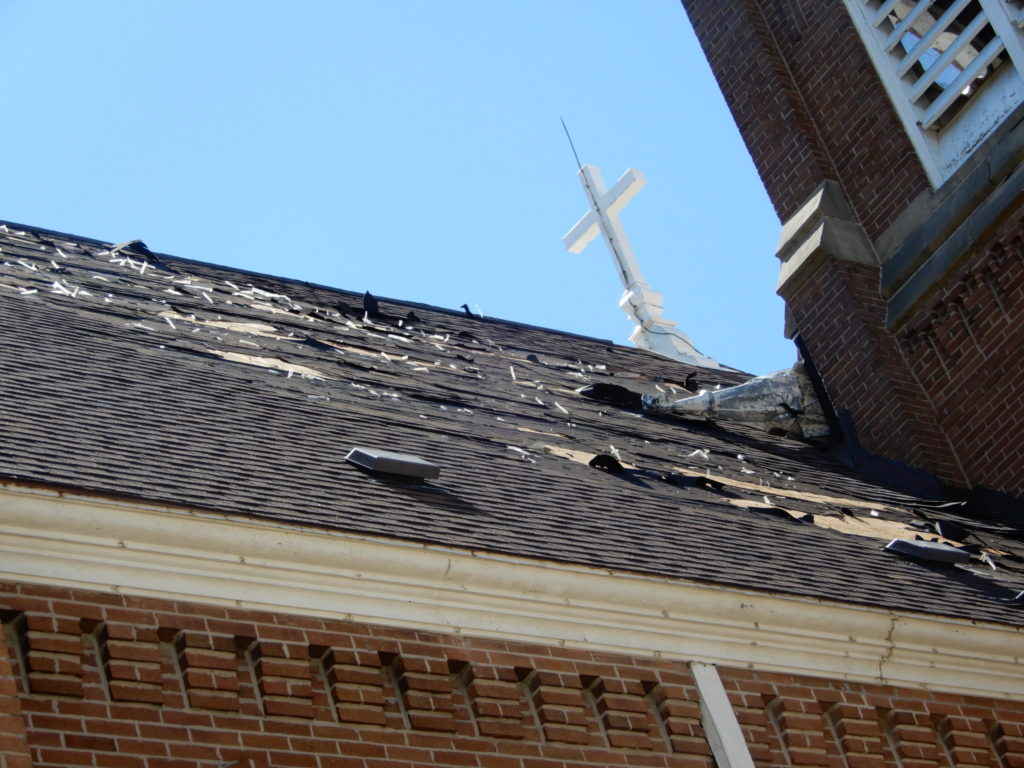 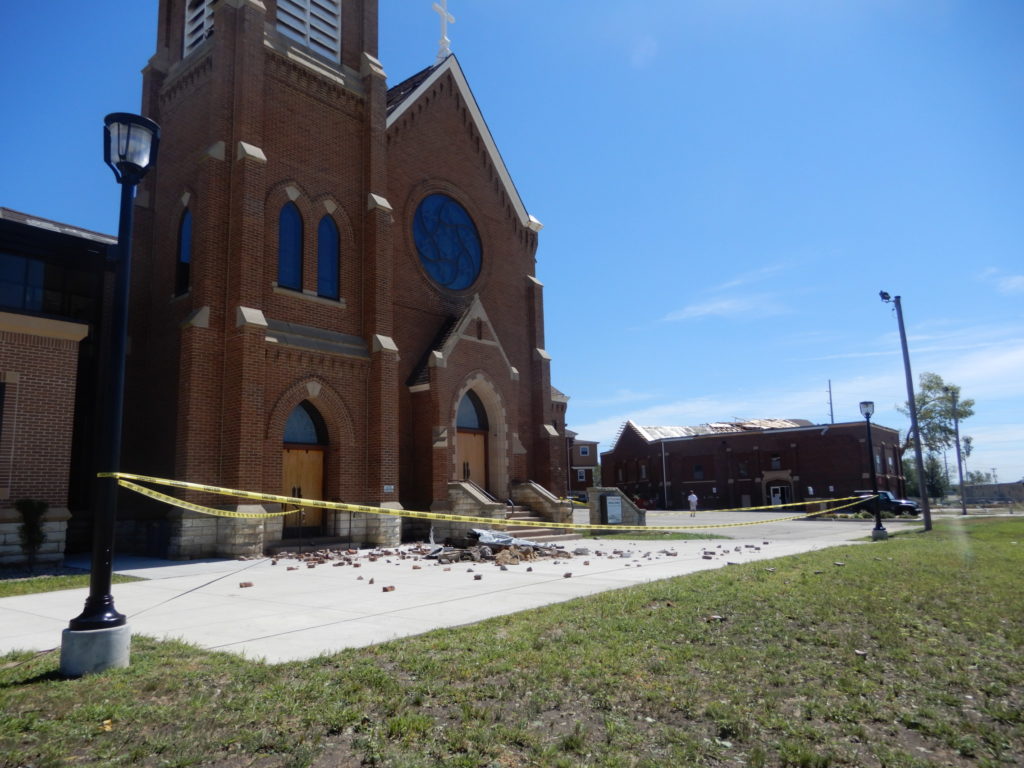 Four ornamental parapets on the belfry of St. Wenceslaus Church were damaged in the Aug. 10 windstorm, but the steeple of the Czech National Parish will be saved. The roof was torn off the Glovik Parish Center, at rear.(photo/Cindy Hadish) 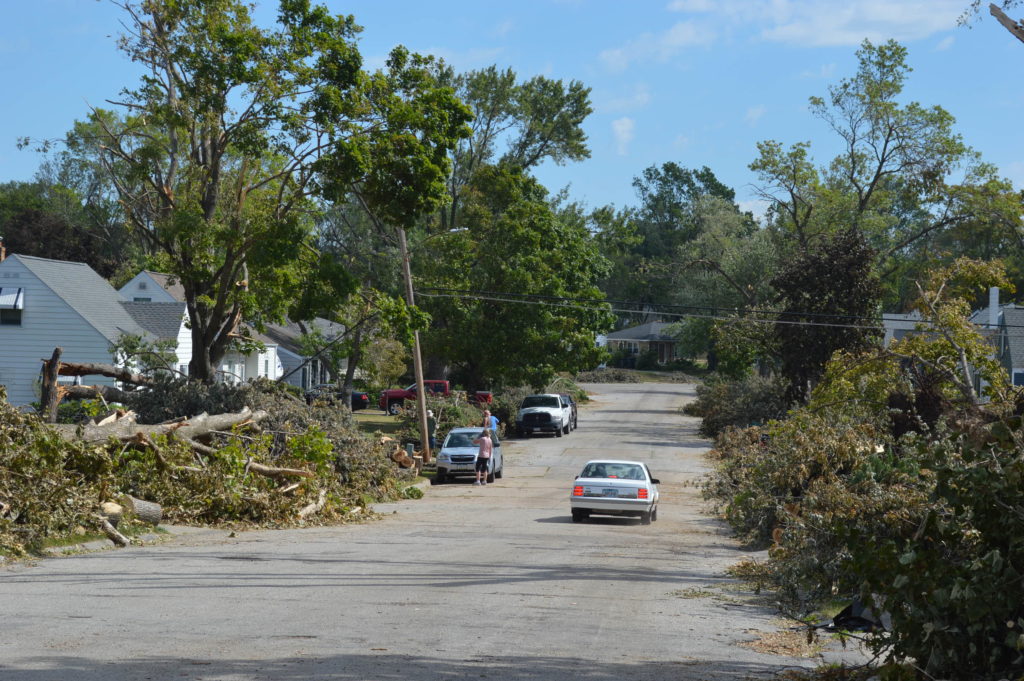 Neighbors help each other on H Avenue NE in Cedar Rapids on Aug. 16, 2020. (photo/Cindy Hadish) 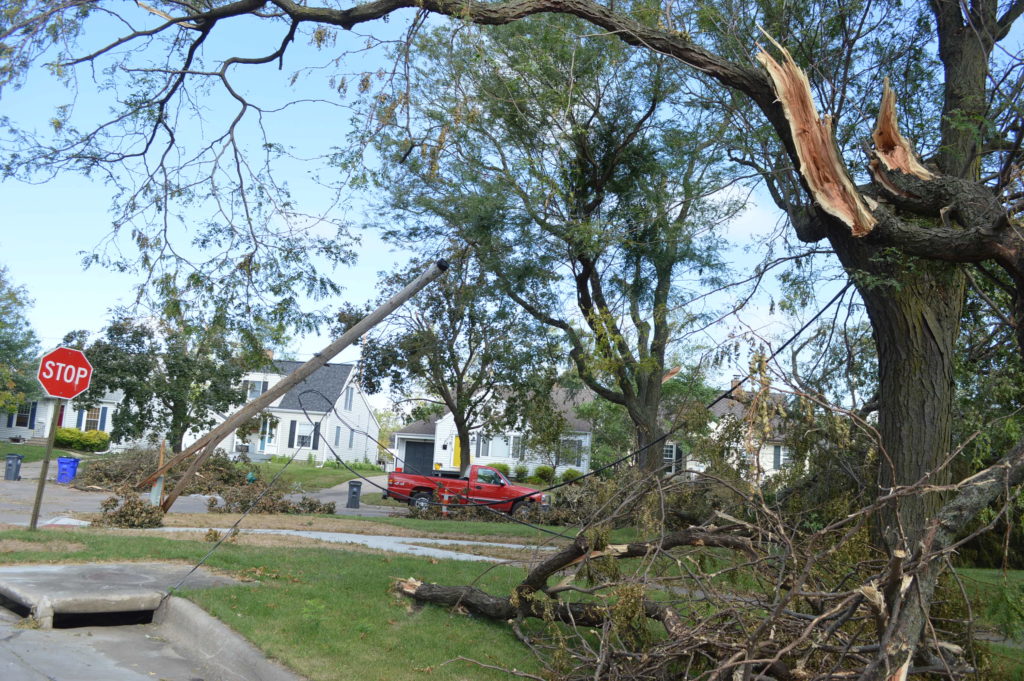 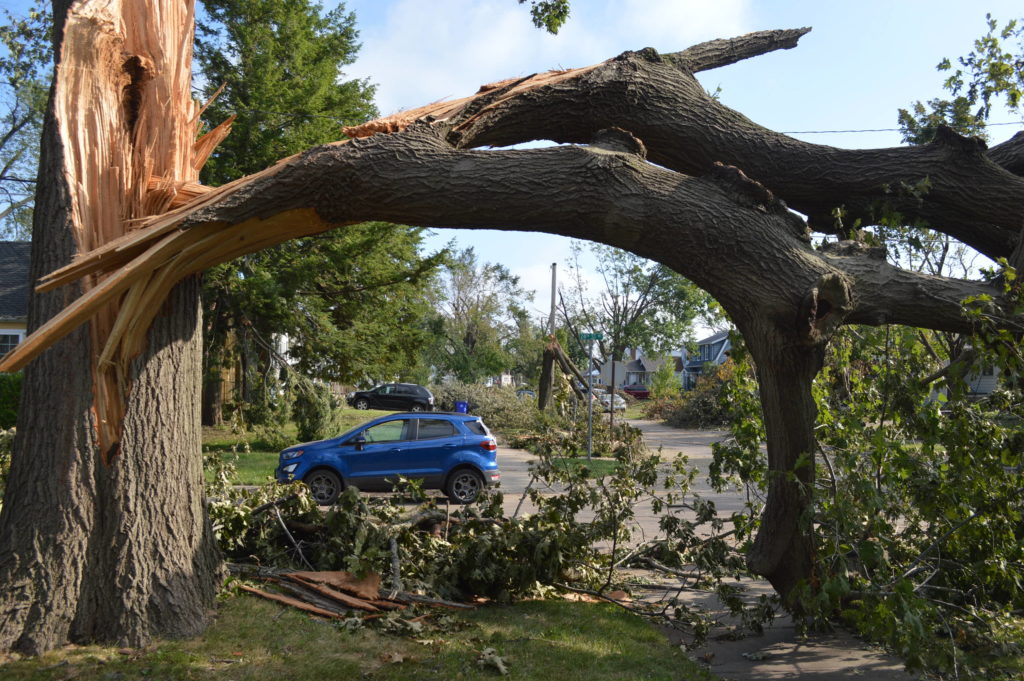 A tree was cracked and bent in half by the storm near 24th Street and D Avenue NE. (photo/Cindy Hadish) 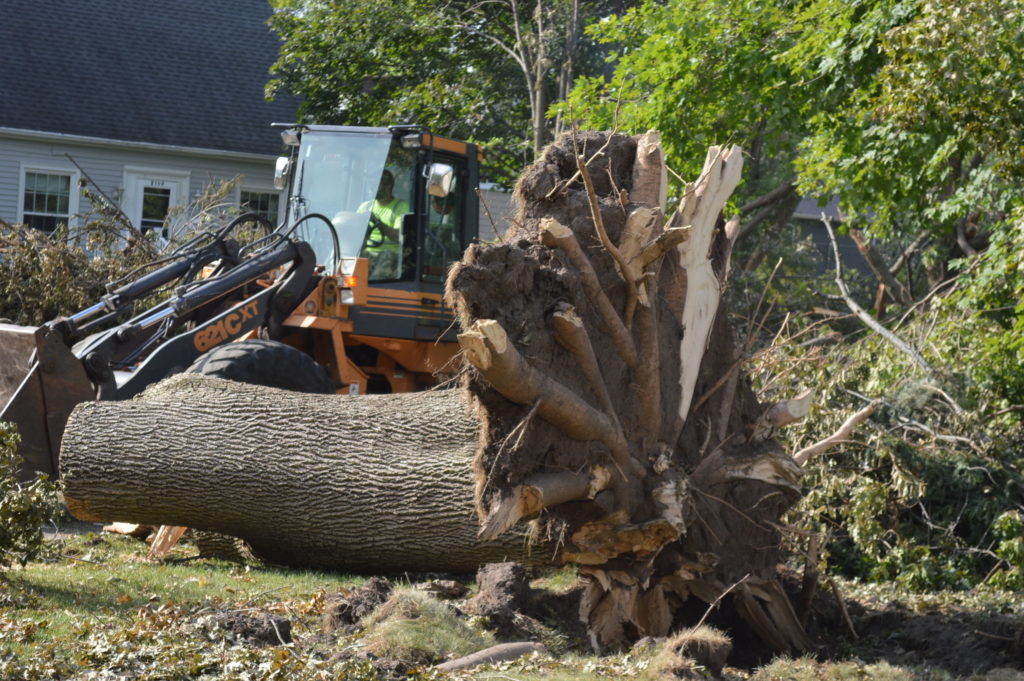 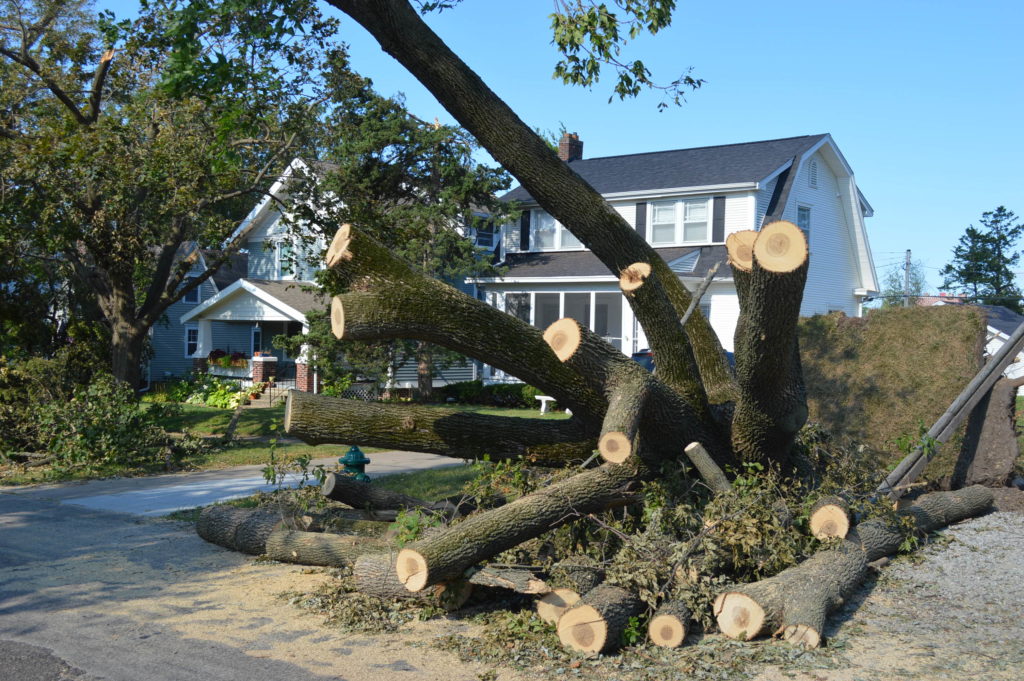 Limbs are cut from a tree uprooted during the derecho in northeast Cedar Rapids. (photo/Cindy Hadish) 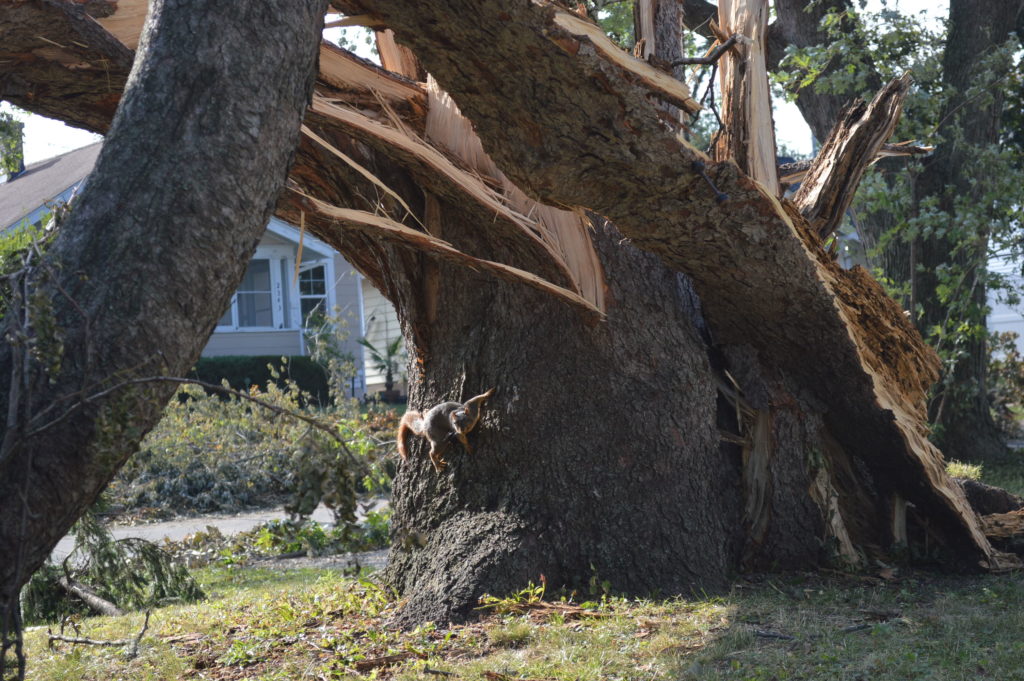 A squirrel scurries around a damaged tree in northeast Cedar Rapids. Birds and other wildlife were hard-hit by the derecho windstorm. (photo/Cindy Hadish)