Keep off the grass at Brucemore, for good reason 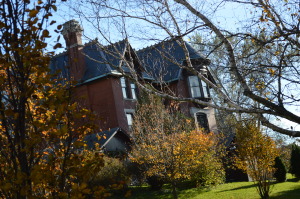 The historic landscape at Brucemore in Cedar Rapids will undergo restoration. (photo/Cindy Hadish)

I must admit, I was taken aback when I first saw the “keep off the grass” sign at Brucemore, and to be fair, it was actually the more polite “please stay off the grass.”

Closer inspection revealed it wasn’t a landscaping company dumping chemicals on the lawn, but a much more palatable reason: a historic landscape restoration is in progress at the site, at 2160 Linden Dr. SE, in Cedar Rapids.

Maura Pilcher, Brucemore’s assistant director, notes that the maintenance plan for Brucemore’s 26 acres will be finished in January. 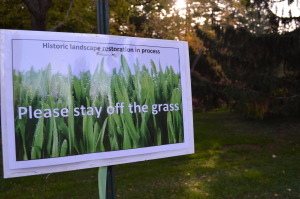 Signs note the historic landscape restoration in the works at Brucemore. (photo/Cindy Hadish)

The plan itself is no small feat, considering the wide scope of the landscape. Brucemore received an Altorfer Machinery Company Non-Endowed Corporate Donor-Advised Fund grant to fund the project.

Maura provided the historic landscape report, below, which offers background on the plans for the site.

In the meantime, this month is a perfect time to visit Brucemore. From now until Oct. 28, visitors can view a multitude of scarecrows created by area businesses and nonprofits and vote for their favorite during the “Scarecrow Invasion.” 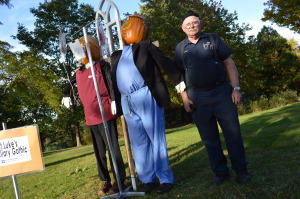 Francis Lebeda of Cedar Rapids is shown with the scarecrow display he helped to create at Brucemore in Cedar Rapids. (photo/Cindy Hadish)

I had a brush with celebrity last week as I walked past the displays. Francis Lebeda of Cedar Rapids was putting the finishing touches on the “American Gothic”-style scarecrows.

Lebeda, whose handcrafted props have been featured in films such as “Miles From Home” and “Gangs of New York” had used the bottom of a chair to rig up part of the St. Luke’s Auxiliary display at Brucemore. More of his handiwork will be featured in an as-yet unnamed film by Steven Spielberg, coming out next year. 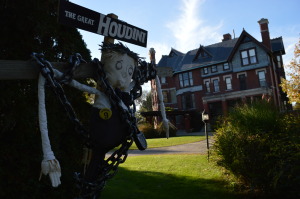 A variety of scarecrows are on display at Brucemore through Oct. 28, 2014. (photo/Cindy Hadish)

See some of last year’s Scarecrow Invasion here and read on for more about Brucemore’s historic landscape restoration.

The Washington Monument, the Great Pyramids of Giza, Brucemore—famous buildings come to mind when one envisions these places. The landscape that surrounds each of these sites—the Mall, the Sahara, Brucemore’s 26 acres—is as essential to the place as the structure itself. Frequently overlooked but nonetheless crucial to the experience, historic landscapes must be studied and preserved as a living collection.

In 1997, Brucemore hired Cecilia Rusnak to generate the first Historic Landscape Report (HLR) for Brucemore. This investment demonstrated Brucemore staff’s respect for and attention to the integrity of the whole site, not just the buildings. Between new, on-site programs and weather events, much has changed in the past 17 years. Consequently, Brucemore staff contracted with Heidi Hohmann, of Iowa State University, to revise the HLR and provide the staff with a maintenance plan in 2014.

Hohmann and a team of Iowa State graduate and undergraduate students have poured over archives, walked the site, and interviewed staff. This tedious research has resulted in a detailed document that identifies nearly every plant on the property, makes recommendations for appropriate stewardship of the landscape, and records changes on the site since the National Trust took ownership in 1981.

Unlike typical museum collections, a living collection is constantly growing, reacting to environmental changes, and dying. While the Prairie Style of landscape design is intended to appear natural, it results from careful plant selection and placement. Rather than letting “nature take its course,” Brucemore staff is responsible for retaining the spatial qualities intended by the Simonds & Co. firm as stewards of a historic site.

Brucemore staff will use the HLR to devise treatment plans and track potential threats to the landscape. For example, regular flooding in one area may be the result of a newly paved area nearby; installing deep-rooted plants or drains could prevent the spread of disease in the trees in the area. The site is home to many rare, individual specimens and character-defining features. With careful maintenance, guided by the HLR, Brucemore’s landscape will continue to be an asset in the community.

Staff have long known that the Brucemore estate was designed by premier Prairie Style landscape designer O.C. Simonds, and research has revealed new details of the career of one Simonds & Co. employee.

Brucemore matriarch, Irene Douglas, hired Simonds & Co. to implement the vision she had for the estate when the Douglases expanded it from ten acres to 33. Beginning in 1907, Brucemore was the first of many commissions the firm took in Cedar Rapids through the late 1920s. Increasingly, residential work was turned over to Simonds’s partner, J. Roy West, and other staff members.

Correspondence in the Brucemore archives confirms that Irene worked primarily with Roy and another employee, Helen Agnes DuPuy. While Roy was responsible for the Linden Drive entrance and driveway, Helen was responsible for the most iconic feature at the site, the formal garden. She sent plans to Irene in 1910 and visited the site that year and again in 1912 to supervise the installation of the garden.

Helen faced a great challenge in professionalizing her work during a time when landscape architects were often referred to as gardeners and female gardeners were considered hobbyists. In the early 1900s, however, she emerged as one of an increasing number of women entering the profession.

Helen grew up in Chicago and attended Lake Forest College briefly before graduating from Smith College in Massachusetts in 1907. By 1911, she was employed as a “landscape gardener” for Simonds & Co. However, her connection to O.C. Simonds may have begun earlier; her parents were his neighbors and he designed portions of Lake Forest College. She married a fellow designer, Charles W. Deusner, and they moved to Pasadena for a short time before returning to the Chicago area in 1915. Her work at Brucemore is only documented through Irene’s Garden Book which records the two visits Helen made prior to leaving the Simonds & Co. firm for California.

Brucemore staff continues to value the impact these two women had in shaping the landscape and providing more than just a backdrop to the mansion. Staff will utilize the Historic Landscape Report to preserve their landscape. 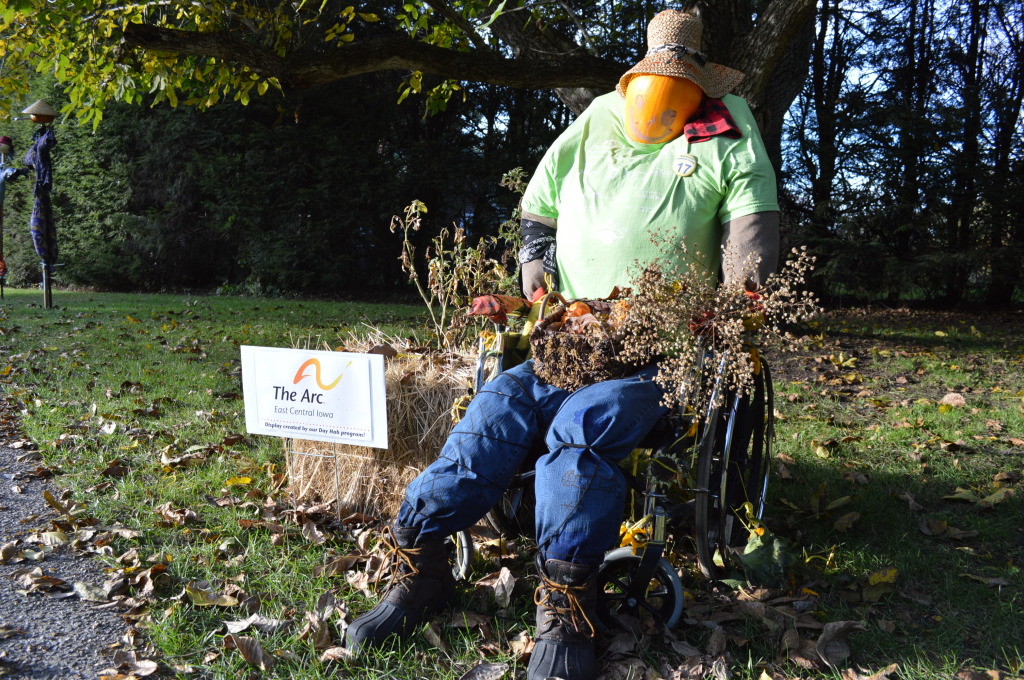 The ARC produced one of the displays at Brucemore for the Scarecrow Invasion. (photo/Cindy Hadish)