Keys to drought, flooding and climate change found in our soil 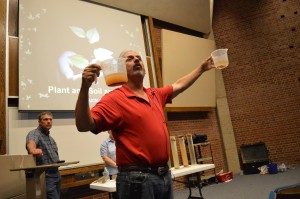 Agronomist Ray Archuleta shows water from a simulation comparing the reaction of rain on tilled soil vs. healthy no-till soil during a seminar June 6 at Coe College in Cedar Rapids, Iowa. (photo/Cindy Hadish)

CEDAR RAPIDS – Ray Archuleta and David Brandt could hold the keys to solving both drought and flooding issues and even climate change.

Their sessions during the June 6 soil seminar at Coe College in Cedar Rapids were nothing short of jaw-dropping.

It’s probably not often that ‘soil seminar’ and ‘jaw-dropping’ are used in the same sentence, but I wish everyone could have heard their presentations on cover crops and soil health, sponsored by the Natural Resources Conservation Service.

“Tilling is the worst thing we do to our soil,” he said, during the daylong seminar at Cherry Auditorium.

“As soon as you use that rototiller,” Archuleta said, farmers, and gardeners for that matter, infuse oxygen into the system, “waking up” the type of bacteria that should be kept at bay. “You burn the house down to warm up the hot tub.”

Both he and Brandt, an Ohio farmer, mentioned all of the standing water they saw in farm fields as they traveled through Iowa through three days of their presentations. Sessions were held June 4 at Denison and June 5 at Iowa State University in Ames before the seminar in Cedar Rapids.

Contrast conventional farming practices – undoubtedly what is in place where they saw those flooded fields – with no-till practices and diverse cover crops, which increase the soil’s organic matter and allow water to infiltrate the soil, rather than create runoff.

Brandt – known for his photo with a giant radish – noted that all of the rain that falls on his land stays on his farm. 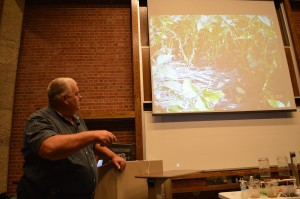 Ohio farmer Dave Brandt points to a slide showing plants growing through his cover crops during the soil seminar at Coe College, sponsored by the NRCS. (photo/Cindy Hadish)

“I saw hundreds of acres under water when I came here today,” he said. Those farmers won’t be able to plant a crop in their flooded fields this year, but will likely get a check from the government; money that ultimately comes from taxpayers.

Brandt calls his cover crops “biological primers” because some people mistakenly think those “crops” should be harvested. Generally, they are not. Cover crops such as rye are knocked over and planted into directly.

Rye can be used after the corn is harvested and before planting soybeans, he said, as one easy option for farmers.

More diverse cover crops, known as blended covers, can involve up to 15 species in a field, such as winter peas and hairy vetch, an annual legume. Brandt even used sunhemp as a cover crop, though he did have some explaining to do with the deputy sheriff who visited his farm. He has also planted radishes; an example of a cover crop that can generate income on its own.

Most of his 1,245 acres are in conventional corn, wheat and soybean crops, but he also plants vegetables and pumpkins using similar techniques.

For the most part, Brandt has no need for herbicides or fertilizers, which contribute to the Dead Zone in the Gulf of Mexico. This creates cost savings, at the same time the technique increases the biodiversity of the soil. Of note: his crops perform as well in drought as in wet conditions.

Archuleta pointed to the connection between monoculture crops and global warming, noting the much higher temperatures in tilled fields compared to those in no-till fields that use cover crops. Farming techniques could have an even greater impact on climate change than vehicle emissions, he said.

Additionally, flood control erroneously focuses on manipulating rivers – millions and even billions of dollars will likely be spent to build walls as flood protection in Iowa – when the issue has a less expensive and more sustainable fix.

What most amazes me about all of this is that these techniques are not in widespread use.  Perhaps farmers stick to what they know best and those practices that appear to be the most simple: chemicals to kill weeds and make the corn grow. That monoculture land, however, is devoid of living organisms that constitute healthy soil and can absorb rainwater, not to mention what those chemicals do to our health.

Archuleta and Brandt were not out to harangue conventional farmers. They were simply there to share their knowledge and hope that some of it sticks. Imagine the difference those techniques could be making this spring as Iowa once again faces widespread flooding and what those practices could do in our agricultural state in both times of drought and flood in years to come. Now imagine it nationwide and worldwide.