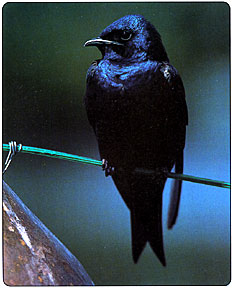 KALONA – Evan Gingerich counted 58 pairs of purple martins in a colony at his home last year.

“They’re just neat to have around,” he said, citing the birds’ “cheerful chatter” and appetite for insects.

Gingerich is one of the founders of an annual Purple Martin Workshop, now in its eighth year. The event is scheduled for this Saturday, March 9, 2013, at the  Christian Aid Ministries Iowa Clothing Center. (See events calendar.)

Gingerich said the workshop attracted nearly 200 people last year. This year’s speakers include Jim Sheib, of the Iowa City Bird Club, on “Backyard and Feeder Birds of Iowa,” Patty Petersen of Trees Forever, on “Selection, Planting, and Care of Trees for Yards and Acreages,” and Jim Walters, of the Songbird Project, on “Build a Better Birdhouse.”

The afternoon program will feature Kelly Applegate, a wildlife biologist for the Mille Lacs Band of Ojibwe, and a founding member and director of the Minnesota Purple Martin Working Group. His work focuses heavily on conservation of habitats and species through partnership building, education, and active restoration of ecosystems. Special projects include purple martins, common terns, chimney swifts, and red-headed woodpeckers.

Applegate is considered the premiere authority on martins in Minnesota. His talk “Purple Martins: Bringing Them Back” will provide information to help conserve this species.

A panel of experts will then answer questions, followed by door prizes and an auction.

“Anybody interested in birds will definitely benefit from this program,” Gingerich said.

Organizers note that a well-maintained martin colony brings joy to any neighborhood and that establishing a new colony is now a possibility for many people. Anyone wanting to start or re-establish a purple martin colony, or in need of assistance in maintaining a colony, will learn something at Saturday’s workshop.

There will be a $2 registration fee. Attendees age 10 and younger are free. Lunch will be available to purchase at the site. Vendors are being encouraged to set up displays of interest to program attendees.

Note: This year’s auction will feature a fully-reconditioned T-14 martin house with Troyer Tunnel entrances, nest trays, and new Troyer horizontal gourds attached – everything you need but the pole and winch.