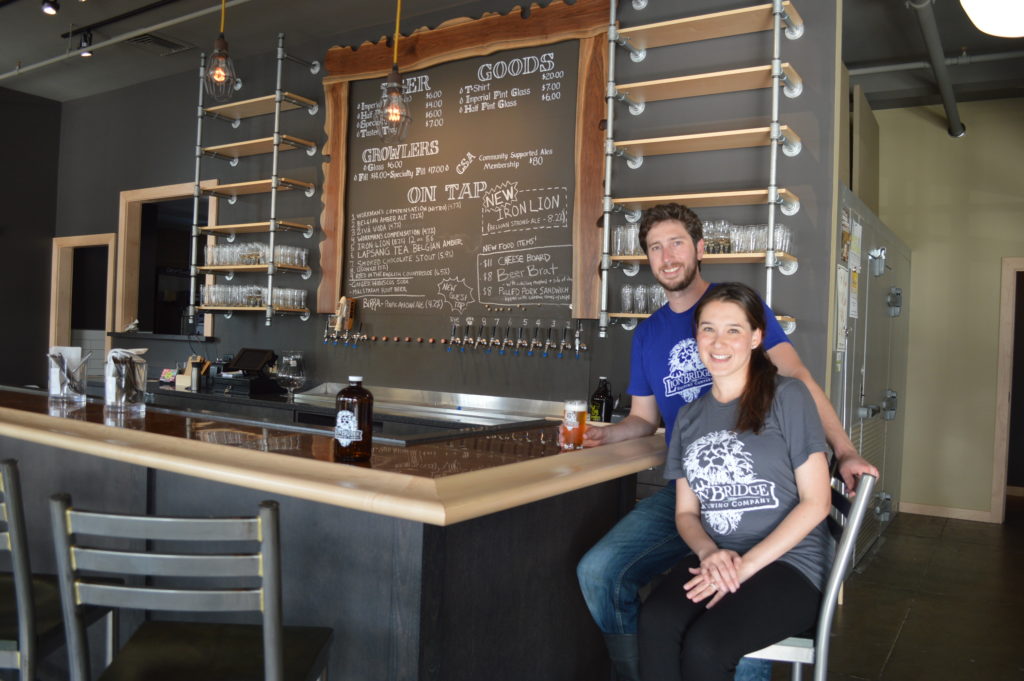 CEDAR RAPIDS – Operating a brewery is energy-intensive, but the owners of Lion Bridge Brewing Company in Cedar Rapids have forged a sustainable future based on their environmental beliefs.

“It’s definitely at the forefront of our business ideals; how can we be more efficient and greener,” said Ana McClain, who owns Lion Bridge with her husband, Quinton. “It’s the triple bottom line: people, planet, profit.”

Customers have flocked to the 10-barrel brewery since it opened three years ago in a repurposed building at 59 16th Ave. SW in Czech Village. The building itself, constructed as a grocery store in 1938, was in line with the couple’s environmental philosophy.

They could have built new, but chose to renovate the former Fritz’s Food Market, which had also been used as a longtime flooring business.

Work included removing layers of pink paint from the walls to expose fire-glazed brick and taking out drop ceilings to restore rooms to their original 12-foot height. The brick walls and concrete floor make the 7,000-square-foot building ideal for the brewery and offer a rustic charm for the taproom, with customer seating both indoors and on a patio outside.

Even furnishings, including bright yellow chairs recovered from the high school Quinton attended and tabletops hewn from a fallen tree, reverberate their sustainability outlook. 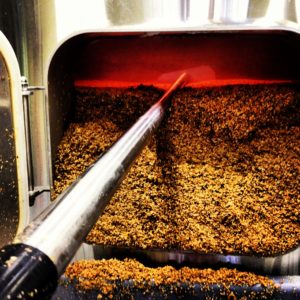 Grains left over from the brewing process go to a local farmer to feed to chickens and other livestock. (photo/Lion Bridge Brewing Company)

Day-to-day operations offer challenges, however, especially related to the brewing process, which uses a high amount of water, energy and other resources.

Thousands of pounds per week of spent grain, such as barley, wheat and rye, that is left over from the brewing process, goes to a local farmer who feeds it to his chickens and other livestock.

Many breweries have similar arrangements with farmers, McClain said, but Lion Bridge has taken steps beyond that measure.

They hired a new business that collects buckets of paper napkins, food scraps and other items to divert for composting, rather than sending the waste to the dump.

“Pretty much everything goes in the compost,” McClain said, citing even special compostable straws that Lion Bridge buys, which cost more than plastic, but are better for the environment because they decompose.

While composting doesn’t save the business money, “it’s doing the right thing,” she said.

Since its site doesn’t have room for a wind turbine, McClain noted, purchasing the certificates is another way to help support renewable energy in Iowa.

Lion Bridge also supports other local businesses by sourcing as much of its food and even some beer ingredients from local sources.

Honey from the Indian Creek Nature Center in Cedar Rapids, for example, was used last fall in Lion Bridge’s Honey Kölsch beer, and syrup from Great River Maple near Garnavillo is used in the Russian imperial stout “GAZPROM!” which won a bronze medal at last year’s Great American Beer Festival. 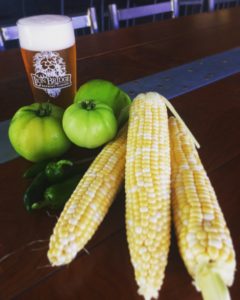 Even 140 pounds of peeled organic cucumbers from Bass Farms in Mount Vernon were used in a brew, and mouth-watering menu items such as Mexican street corn, or elote, used sweet corn from the farm.

Lion Bridge also serves a role with Bass Farms, serving as the pick up location for the farm’s Community Supported Agriculture, or CSA program.

Other foods, including pretzels, mushrooms, tortillas, sausages and more are locally sourced. One day, McClain needed to pay bills and crossed the bridge – from which the brewery takes its name – to walk to NewBo City Market and elsewhere in the neighborhood.

“I got back and I felt really good,” she said. “I paid all those bills on foot and they were all within a mile of us.”

That feeling of community is important to the McClains, who received plenty of volunteer help during a flood last fall, when the Cedar River rose to its second-highest level. Berms and other flood protection kept the water at bay, but some businesses decided to permanently close shop.

Lion Bridge reopened, with the McClains resolute to stay in Czech Village.

“I feel like this is the heart and soul of Cedar Rapids,” Ana McClain said. “It needs to keep beating.” 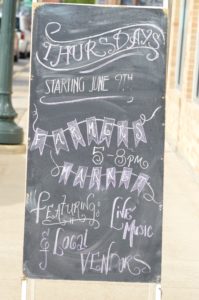 The brewery keeps that heartbeat going with several initiatives, such as live music and a new night farmers market that started last year.

Farmers sold fresh produce, honey, mushrooms and other items outdoors, accompanied by a backdrop of music and a “bouncy house” for children. McClain said the concept will continue in the coming season.

“It’s definitely a testament to what we try to do every day,” she said, adding that the McClains’ environmental philosophy “was one of the reasons I wanted to work here.”

McClain said she is grateful Lion Bridge’s staff is on-board with the initiatives, which also are well-received by many customers.

“Some times, doing the right thing requires some extra steps, but the rewards pay off in other ways,” she said. “As long as we can reduce the impact we have on our planet, it’s important to us.”

See more at: www.lionbridgebrewing.com and read other articles about healthy living at The Radish Magazine