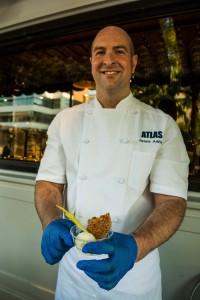 By Cindy Hadish/for The Iowa Source

A Local Food Fair, Culinary Walk, Farm to School Farmer Fair and Share the Harvest Dinner are all part of the festival, taking place from Sept. 16-20.

“It’s really to showcase all of the initiatives, businesses, farmers and organizations involved in local foods that work to create a healthy food system,” said Michelle Kenyon, Field to Family Program Director, adding that the festival is in its 14th year.

The organization’s mission is to grow healthy communities by connecting local food and families, with the goal of a region where people eat with the seasons; farmers make a living; and rural landscapes are diverse, abundant and healthy.

Education plays a large role in those efforts, Kenyon said.

The Local Food Fair, the festival’s first event from 5-7 p.m. Wednesday, Sept. 16, offers an easy opportunity for the public to learn about local food-related initiatives in Johnson County.

Besides Field to Family, organizations such as the Local Foods Connection and Johnson County Food Policy Council, along with farmers and businesses that work to strengthen the community food system, will be highlighted at the event, at the Iowa City Farmers Market. 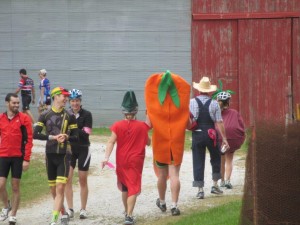 Kenyon said the fair encourages people to become active participants in volunteering their time and other resources towards strengthening a healthy foods system.

The festival’s Culinary Walk is one of the most popular events, taking place this year from 5:30 p.m. to 8:30 p.m. on Thursday, Sept. 17, in downtown Iowa City.

Seven restaurants will be featured on the walk, which serves as a fundraiser for Field to Family.

Proceeds go towards the organization’s Farm to School Chapter, which works to connect locally grown foods to schools, and to the Local Food Finder, a list of farmers, restaurants, markets and grocers committed to local foods.

Participants can walk to the restaurants and sample food that features ingredients from local farmers.

Tickets are sold at New Pioneer Food Co-op and at fieldtofamily.org, with a $15 student/reduced rate and $20 for early birds through September 13. Starting September 14, all tickets cost $30.

“Our aim is to help kids understand where their food comes from and open their minds to trying new foods,” Kenyon said.

The Share the Harvest Dinner, on Sunday, Sept. 20, will be 5:30 p.m. to 8 p.m. at the Sheraton in downtown Iowa City. The dinner, which serves as another fundraiser for Field to Family, features entrées from five local chefs, with ingredients from local farmers, paired this year with Iowa craft beer.

Keynote speaker, Doug Alberhasky, the owner of John’s Grocery in Iowa City, will discuss the past, present and future of Iowa’s craft beer industry.

Kenyon said this is the first time that Iowa craft beers from local breweries will be paired with the dinner entrees that are created by the chefs.

“It’s a great opportunity for people to meet their chef and for the chefs to meet the people they serve,” she said.

Tickets are $50 and are sold at New Pioneer Food Co-op and at fieldtofamily.org.

Kenyon noted that a large number of volunteers and organizations are needed to operate the annual festival, but the event appears to be making a difference.

“Every year, people learn more about the benefits of eating local and supporting local farmers,” she said. “The interest is growing. People want to find ways to put it into action and make it a part of their daily lives.” 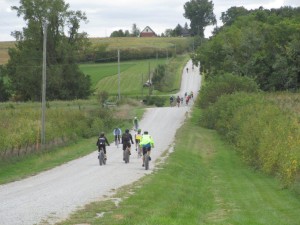 Cyclists make their way down roads in rural Solon during the annual Culinary Ride on Sunday, Sept. 21, 2014. (photo/Larry Hanus)

While not an official part of the Field to Family Festival, the Iowa City Culinary Ride has sprouted into a growing entity of its own, which benefits the Farm to School program and takes place the same day as the festival’s Harvest Dinner.

The Culinary Ride, now in its fifth year, features local food prepared by area chefs. Bicyclists make their way to farms and various stops where the food is served.

“We like keeping the ride small, fun, and funky,” said organizer, Audrey Wiedemeier.

Wiedemeier noted that the ride has expanded beyond Iowa City to two other communities. The NewBo ride in Cedar Rapids, which took place in August, and the Quad Cities event, set for Sept. 13, pair biking with local farms, food and fermentation. It is the second year for both, she said.

The Iowa City Culinary Ride, set for September 20, will traverse the northwest region of the greater Iowa City area. The two routes to choose include a 30-mile Cherry Tomato Route, and an adventurous 60- mile Beet-it-Up Route.

Find a link to register for the Culinary Ride at: www.culinaryride.com

For more information about the Field to Family Local Foods Festival, see: www.fieldtofamily.org

Read more about Iowa arts and entertainment at: The Iowa Source