Magic in miniature: fairy gardens move into the mainstream 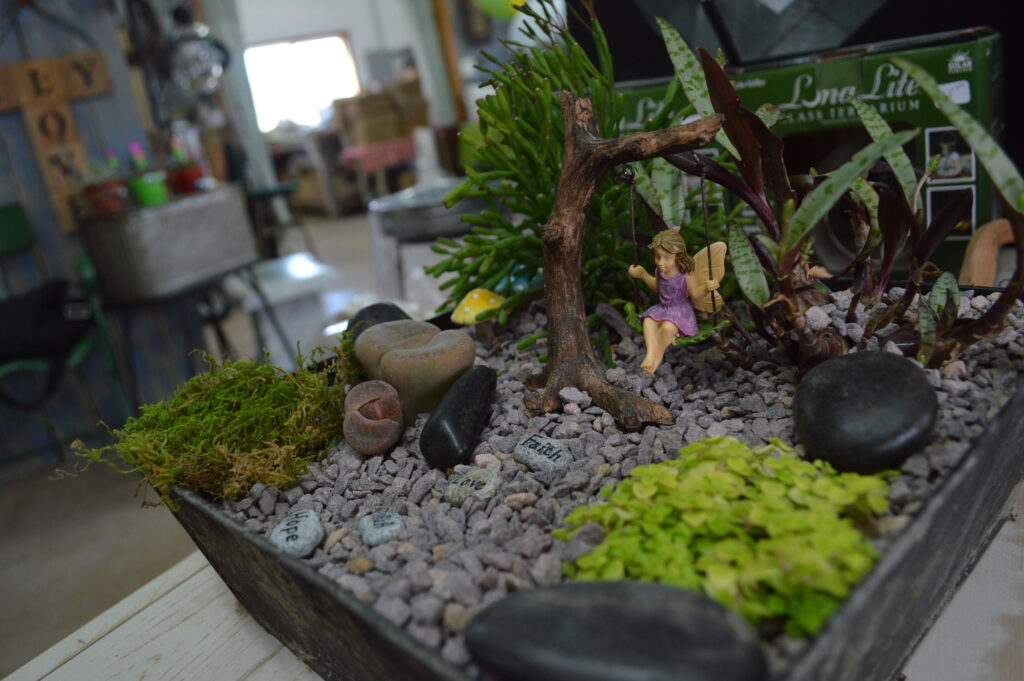 A fairy garden is displayed at In the Country Garden and Gifts in rural Independence, Iowa. (photo/Cindy Hadish)

Josh Spece, co-owner of In the Country Garden & Gifts, was on the cutting edge of a garden trend when his shop in rural Independence opened seven years ago.

Fairy gardens were coming in vogue at the time and have since seen their popularity soar, moving into the mainstream with accessories sold even at big box stores.

At first, Mr. Spece had to search to offer the miniature cottages, animal figurines and other embellishments that gardeners use to personalize the tiny gardens. 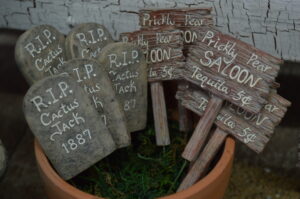 Mini signs are among the accessories available for fairy gardens. (photo/Cindy Hadish)

“Now every garden company makes their own line,” he said. “Pretty much anything you can think of, they make it in miniature: benches, arbors, stepping stones, gazing balls, animals.”

At his family-owned business, hostas – the popular foliage plant that thrives in shade – are the number one sellers, but fairy garden accessories and the plants that grow in those gardens also remain hot items.

Mr. Spece cites the wide array of plants and whimsical accessories among the reasons for the popularity of fairy gardens, along with the space requirements.

“It’s a fun thing that anyone can do,” he said. “You don’t need much room. You can put it outdoors or even have one indoors.”

A fairy figurine in a flowing purple dress sits in a tiny swing hung from a tree branch, surrounded by mystical plants, colorful toadstools and miniature stepping stones in a scene set up inside the shop earlier this spring.

While Mr. Spece said there are no “rules” when it comes to planting a fairy garden, the following suggestions can come in handy: 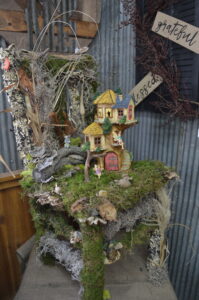 A vintage chair is used as the setting for a fairy garden at the shop. (photo/Cindy Hadish)

— Use plants that won’t outgrow the space. Some companies sell “baby” plants that eventually grow too large for fairy gardens.

— Succulents, which tolerate drought and in many instances, stay small, are the main plants Mr. Spece recommends for fairy gardens.

— For fairy gardens planted in the shade, some miniature varieties of hosta work well, but don’t combine with succulents, which need sun to grow.

— Plant in a wooden box, old wagon, shallow drawer or other container to bring inside during the winter. Some plants can survive Iowa’s cold, but others do not and the accessories will last longer if brought indoors.

— Potting soil can be covered with materials such as pebbles, terrarium bark or dried Spanish moss for a natural look.

Pinterest offers a seemingly endless number of ideas for fairy gardens, with twig chair tutorials, tiny sun-catchers, mini lanterns made by gluing an acorn cap on a marble and many more do-it-yourself projects.

For would-be gardeners needing a bit of guidance, In the Country offers an annual fairy garden workshop, or can provide private sessions for small groups.

Many return to the shop regularly, attracted by the latest lines of accessories and new varieties of plants.

“We’re always looking for something new and different,” Mr. Spece said. “People are demanding more, so the industry is responding.”

Some of that includes new varieties of old favorites, such as hen & chicks, those cold-hardy, drought-tolerant mainstays in many grandparents’ gardens, but in brilliant colors beyond the standard green, including shades of yellow and pink, while other succulents come in unusual shapes, such as corkscrews. 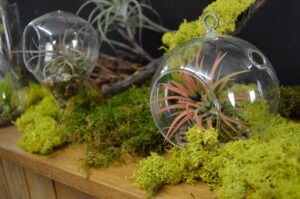 Air plants are among the latest trends, shown here at In the Country Garden and Gifts. (photo/Cindy Hadish)

Many of the latest tropical-looking succulents are not winter hardy in Iowa, but can be brought indoors, Mr. Spece noted.

In addition to the increasingly popular succulents, he is looking at other gardening trends, including air plants, which take on an otherworldly appearance and can be grown without soil – though they do need light and moisture – and Mangaves, a hybrid plant created by cross-breeding Agave and Manfreda that comes in a variety of unusual foliage patterns. The Mangaves are not fairy-garden-sized, but are drought-tolerant.

As far as accessories, fairy figurines are one mainstay, “because everyone has to have a fairy in a fairy garden,” Mr. Spece said, and tiny cottages are best-sellers that some gardeners use to create entire fairy garden neighborhoods.

“They can go as extravagant or as simple as they want,” he said. “There is no rhyme or reason to make a fairy garden. As long as you like it, that’s all that matters.” 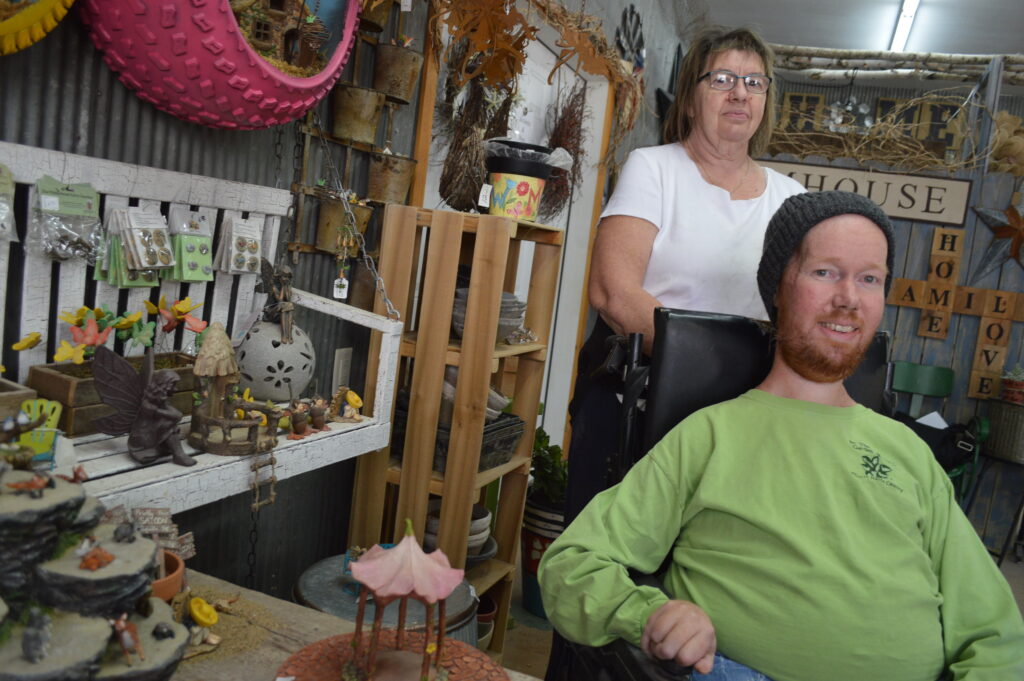 Josh Spece and his mother, Sue Spece, are co-owners of In the Country Garden and Gifts in rural Independence, Iowa. (photo/Cindy Hadish) 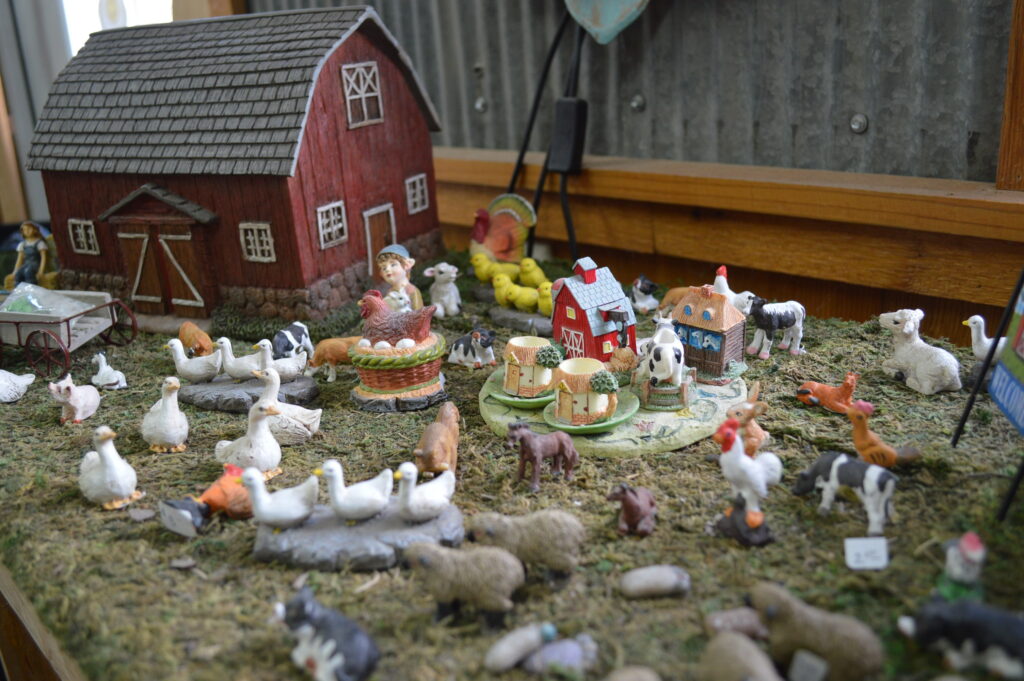 Tiny farm animals, barns and other farm-themed items are among the popular choices for fairy gardens, shown here at In the Country Garden and Gifts. (photo/Cindy Hadish) 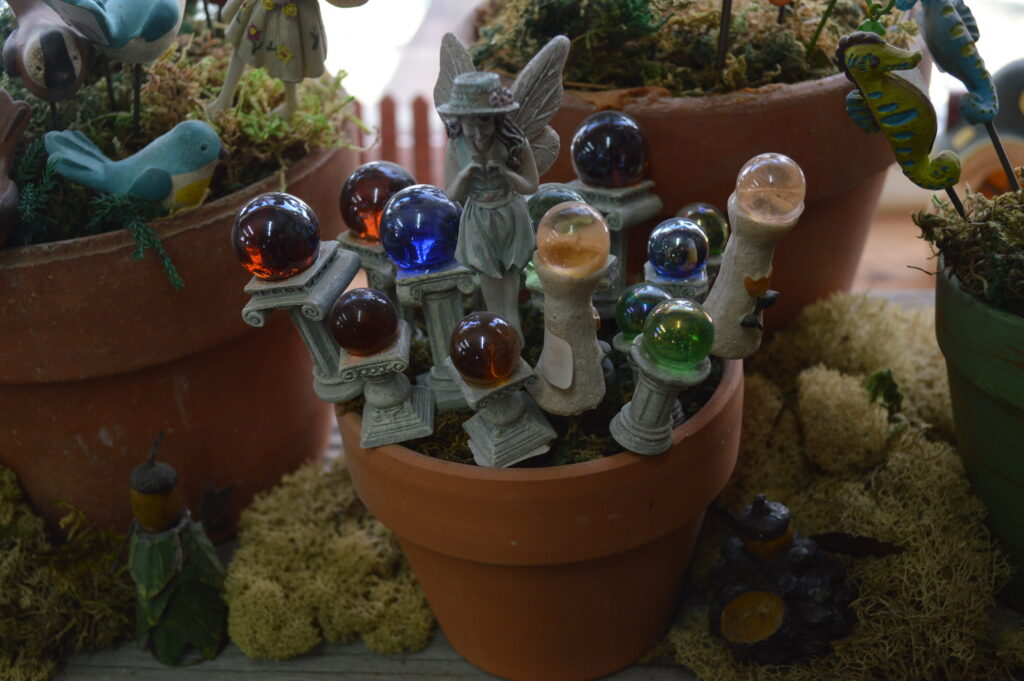 Miniature gazing balls are sold at In the Country Garden and Gifts in rural Independence, Iowa. (photo/Cindy Hadish) 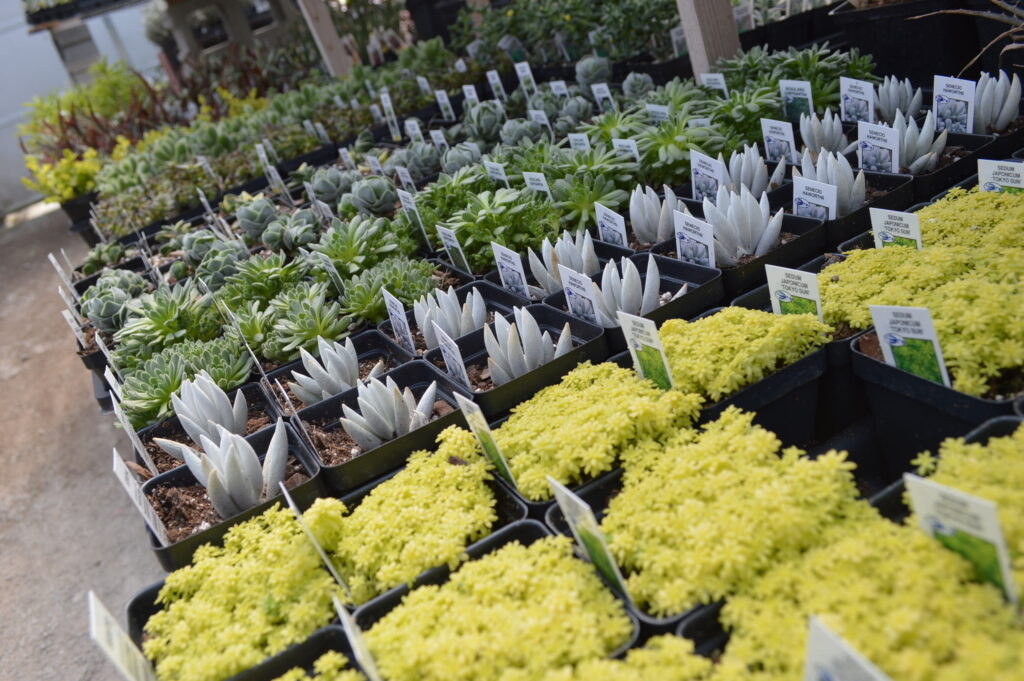 A wide variety of sedum is grown in the shop’s greenhouse. Sedum is an appropriate choice for fairy gardens, as the plants stay small. (photo/Cindy Hadish)