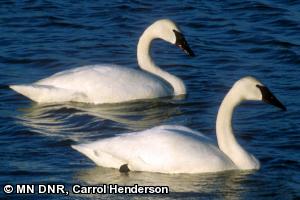 Earlier this month, two Iowans were charged with killing one swan and injuring another.

Today, the Iowa Department of Natural Resources announced a similar case, this time with three men near Fort Madison.

Richard Holbert, 70, of Fort Madison and Vinson Davis, 59, of Keokuk, have pled guilty to one count each of unlawful take of a protected non-game species, one count each of failure to exhibit game to a conservation officer and one count each of abandonment of dead wildlife. In addition, Holbert was charged with an additional count of abandonment of dead wildlife for a wood duck that was left in a duck blind and Davis was charged with use of lead shot while waterfowl hunting. Both will also be responsible for paying $1,500 each in restitution for the Trumpeter swans.

James Conaway, 84, of Fort Madison, has pled not-guilty to charges of unlawful take of a protected non-game species, failure to exhibit game to a conservation officer and abandonment of dead wildlife. If convicted, he also faces restitution costs of $1,500.

Law enforcement officers from the Iowa Department of Natural Resources (DNR) investigated the incident following tips from other hunters regarding the swans being shot. During the investigation, the three dead Trumpeter swans were found hidden from view in an area near a duck blind the men had been using. The duck blind is located on property owned by Climax Molybdenum located four miles south of Fort Madison on the Mississippi River.

“I can’t say enough about how important the information was that we received from other hunters in investigating this case. We couldn’t have done it without them,” said DNR Conservation Officer Ben Schlader.

In addition to the charges, three shotguns, an all-terrain vehicle and a boat with oars were seized during the investigation.