Morel mushrooms are shown from a previous season. (photo/Cindy Hadish)

Morel mushrooms, the elusive delicacies found during springtime in wooded areas, are already being discovered in Iowa, as well as neighboring Nebraska and other states.

The proper amount of moisture and soil temperature allows the spongelike mushrooms to “pop,” and that combination appears to be just right as of early April in some areas.

Nebraska Morels is reporting a bounty of morel finds on Facebook and the same is underway in Iowa, with morels documented on Facebook’s Iowa Morel Report in 17 of Iowa’s 99 counties as of April 10, though mushroom hunters note that they’re being found elsewhere, too.

Any morel hunter will tell you exactly where he or she found their stash: “in the woods.”

Good luck trying to glean more specifics from your sources.

Still, there are a few tips for people searching for morels that are true every spring: 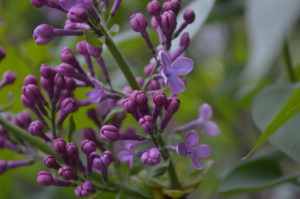 Some morel hunters time their outings to when lilacs begin to bloom. (photo/Cindy Hadish)

— Soil temperatures between 50 to 54 degrees Fahrenheit are ideal for morels to pop. Find a soil map of Iowa here.

— Longtime mushroom hunters head to the woods when lilacs are about to bloom, while others look to wildflowers in bloom, such as bluebells, trillium and bloodroot.

— Look for dead or dying elms, where the mushrooms have a symbiotic relationship with the trees.

— Ash trees, being decimated by emerald ash borer in many states, also are said to boost the growth of morel mushrooms.

— A warm day following a good rain, which most of Iowa has experienced this week, provides ideal morel growing conditions, but once temperatures soar into the 80s, the morel season generally comes to an end.

— Morels can be found in state parks, but for private woods, seek permission to hunt from the landowner.

— Eat only what you’re certain is a morel, or other edible mushrooms, as some can be poisonous. Iowa State University Extension and Outreach has published a Safe Mushroom Foraging Guide with photos and descriptions.

Last year’s Houby Days Festival in Cedar Rapids (houby is the Czech word for mushroom) was canceled due to the coronovirus pandemic. See photos of morel winners and more from the previous festival.