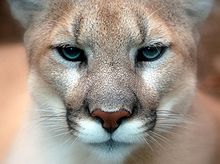 The Iowa Department of Natural Resources reported that a mountain lion was killed today in western Iowa.

Similar to black bears, mountain lions have no legal protected status in Iowa.

Today, officers with the Iowa Department of Natural Resources (DNR) were called to dispatch a mountain lion from a farm near Galva, in northeast Ida County.

The situation arose after a neighboring livestock producer discovered a dead calf that showed evidence consistent with an attack by a large cat late last week. Repeated calls were placed to 911 Monday evening by a nearby landowner who discovered the cat.

DNR officers use lethal action as the last resort option in these situations and every effort is made to humanely remove the animal.

“White-tailed deer and other wild animals, particularly the weak or injured, are often the preferred prey. But in this situation, it appears this mountain lion has targeted young livestock and livestock producers are well within their rights to protect their livelihood,” said Bruce Trautman, deputy director with the Iowa DNR.

This is the first confirmed female mountain lion in Iowa. There is no physical evidence that she has produced any young. The Iowa DNR will collect teeth, tissue samples for genetic analysis and examine the stomach contents of the 88 pound animal.

This is the fourth mountain lion killed in Iowa and the most recent since 2013 when a four year old male was shot in Sioux County. Since 1995, there have been 21 confirmed mountain lions in Iowa.

Western South Dakota and Nebraska have been the genetic source for the lions killed in Iowa.

Mountain lions are not listed as a furbearer and have no protected status in Iowa.