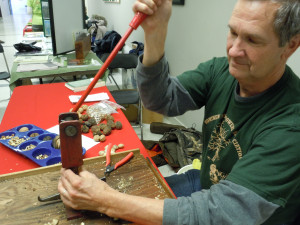 Dell Lawrence demonstrates nut-cracking on Saturday, Feb. 16, 2013, at the Winter Gardening Fair at Kirkwood Community College in Cedar Rapids, Iowa. He and his walnuts will be featured on “Iowa Ingredient” on IPTV. (photo/Cindy Hadish)

Look for a sometimes overlooked native food on an upcoming episode of “Iowa Ingredient” on Iowa Public Television.

Dell Lawrence of Marion, who often can be found cracking walnuts at the Mount Vernon Farmers Market, is featured in the show, which spotlights Iowa foods.

A member of the Iowa Nut Growers Association, Dell said the show visited his family farm in Sabula, where the walnuts are grown.

Host Charity Nebbe explores the farms, restaurants and ingredients that make various foods uniquely Iowan on Iowa Ingredient, along with ways to use the food in recipes.

For this episode, Chef Michael Baily from the Des Moines Embassy Club shares his secret to making a savory walnut dish.

Dell said the show was interested in the fact that he sells the walnuts at farmers markets and at other places, including the former Lincoln Cafe in Mount Vernon.

For more about the show, see Iowa Ingredient.